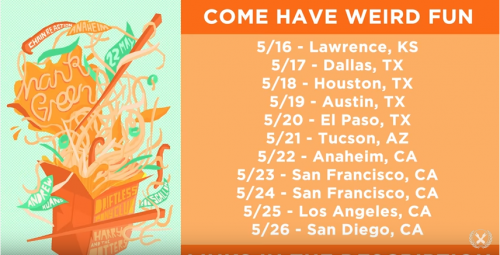 YouTubers get excited. Hank Green, one half of the Vlogbrothers, co-creator of VidCon and one of the driving sources behind some of YouTube’s most popular channels and web series such as Crash Course, Sci Show and the Lizzie Bennet Diaries, is doing a music tour next month. The last stop of the tour is San Diego.

Hank will not only be performing, but acting as MC for the night. His band Hank Green and the Perfect Strangers won’t be alone on the tour. He will be joined by fellow YouTube favorites Driftless Pony Club, Rob Scallon, Andrew Huang and wizard rock band Harry and the Potters.

Hank’s music may be lesser known than some of his other endeavors, but it was his music that first skyrocketed him and his brother into a whole new level of internet fame back in 2007. Before the intense popularity the other half of the Vlogbrothers, John Green, earned by his best selling books and their successive film adaptions, the brothers found modest popularity on You Tube as they vlogged back and forth in a year long experiment of textless communication.

During the project Hank released an original song entitled Accio Deathly Hallows. He serenaded YouTube with his excitement for the soon to be released final Harry Potter book. The video made YouTube’s front page and now nine years later, VidstatsX reports that the Vlogbrothers’ videos have upwards of 605 million views. The fast talking vlogger has become a rock star of the nerd world.

Hank’s entrepreneurial spirit led him to co-found DFTBA Records, a music label that supports him and his fellow You Tube artists’ music.

Hank has continued to release original music on You Tube and in 2008 his first studio album, So Jokes, debuted. He formed the band Hank Green and the Perfect Strangers and released an album entitled Incongruent with them in 2014.

Their songs cover a wide variety of topics such as Harry Potter, loving science, video games and the weirdness of the universe. Hank may not be musical perfection, but he’s a talented and clever artist whose infinite nerdiness has sparked a generation of loyal fans.