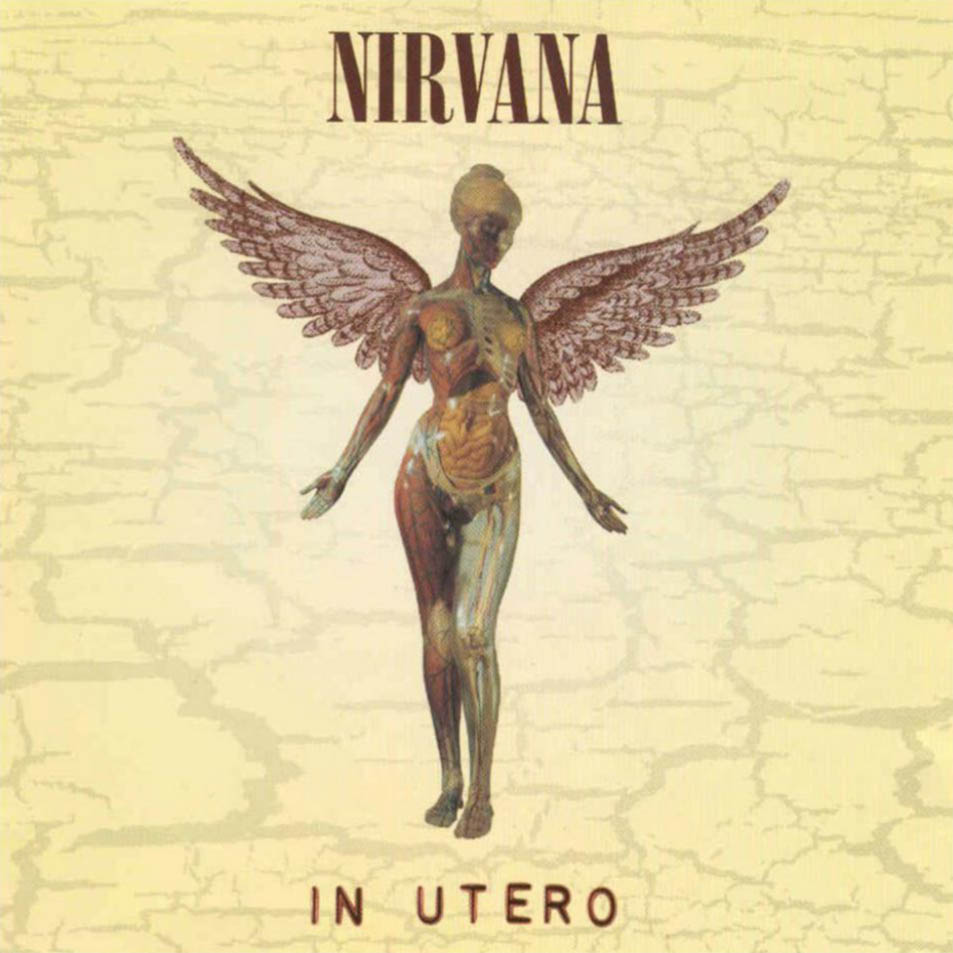 In high school, my history teacher told my class that history becomes classified as such when 20 years have elapsed from the time an event happened. In that case, Nirvana’s 1993 album In Utero has just crossed that threshold, and as this blog profiles older albums that people nowadays aren’t as familiar with as they should be, I say its fair game. Their final studio record, In Utero was much more hard edged than the band’s megahit predecessor Nevermind. Kurt Cobain deliberately tried to make In Utero less accessible in order to move away from the more pop elements that pervaded the Nevermind album.

The album begins with the crash and howl of Serve the Servants, the change in recording style and the shift to a rawer and more distorted sound is instantly recognizable. Still, this is the type of song that you could find on Nirvana’s earlier work but in different sonic packaging.

Dave Grohl’s drums kick off the next song, the raging Scentless Apprentice. A super heavy track, Kurt Cobain is in full unintelligible-lyrics-leading-to-animal-howling mode. If Serve the Servants did not convince listeners that this album was going to be a different beast than Nevermind this song sure did. It is the only song on the album that credits all three band members, the rest being all credited to Cobain.

The third track on the album is the lead single, Heart Shaped Box. The song retains the quiet/loud alternations that worked well for the Nevermind material. The song has a much smoother sound than the rest of the album, owing to the mixing alterations given by Scott Litt to augment producer Steve Albini’s first mix.

Following up Heart Shaped Box is the completely uncontroversial crowd pleaser of a song called Rape Me. The track was a double A-sided single with All Apologies after the Heart Shaped Box release. It was retitled ‘Waif Me’ on cds sold at Walmart and other department stores that refused to sell the album with the original title. The introductory riff shares a similar structure with Smells Like Teen Spirit.

The fifth song on the album is Frances Farmer Will Have Her Revenge on Seattle, the title was inspired by a biography of the actress. Dave Grohl is all over the drum kit, crashing down on the toms in the choruses and setting a super heavy beat.

Following up the heavy and distorted Frances Farmer is the lithe acoustic track Dumb. Kera Schaley provides backing cello as a counterpoint to Cobain’s strumming guitar. Dumb stands out among the other heavily electrified songs with its musical style but also with Cobain’s double tracked vocals.

Clocking in barely under two minutes is the steady rocking Very Ape. The song itself is a conventional rocker with a very danceable beat for Nirvana standards.

Following up the faster and consistent Very Ape is Milk It, which is a much heavier and more segmented piece. The song alternates between halts and rushing sound, with Cobain going from mumble to outright screaming just as fast. Krist Novoselic’s modulating bass is clearly recognizable in the haze of guitar distortion.

The second and final song on the album featuring an acoustic guitar, we make our way to Pennyroyal Tea. The acoustic section does not last long as the chorus begins with a rush of the full band’s fury. Cobain sings about his pains and ailments, on an album with lyrics frequently addressing illness, this is the most extreme. Pennyroyal tea itself is supposedly contains abortive chemicals, but Cobain famously mocked it and its users because he maintained that it didn’t work. It was supposed to be the third single for the album but was recalled after Cobain’s suicide.

In a great display of Cobain’s sense of humor, Radio Friendly Unit Shifter is anything but. One of the dirtiest tracks on the album, the song roars and hums with feedback of Cobain’s guitars, droning over the breakneck pace of Grohl and Novoselic’s backing rhythm.

The eleventh track, Tourette’s, is somewhat of an oddity. It is barely over a minute and a half long and consists mainly of indecipherable screaming backed by a traditional grunge track, if grunge can ever be called traditional.

We finally come to the end of the album with the brilliant All Apologies. Bassist Novoselic backs Cobain on electric guitar on this song, with Kera Schaley again contributing a fantastic turn on cello. The track balances fantastically the melodic and the distorted, with Cobain’s strange and poetic “All and all is all we are” refrain echoing from the speakers as the song fades away to conclude the album.

Nevermind and its collection of hit singles will forever be the album that defined Nirvana’s legacy in the popular culture. It was the album that popularized grunge and proved that alternative rock could be as successful, if not more successful, than conventional rock. However, In Utero may be the band’s best work. They had refined their sound, to an ironically unrefined state, and wrote complex and personally engaging songs. Although it was not intended to be their final studio output, In Utero is a perfect mesh of Nirvana’s raw and polished elements, and a worth cap on their career.