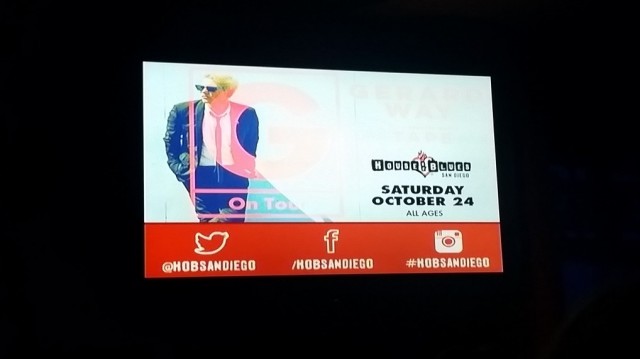 Saturday night Gerard Way played a sold out show in downtown San Diego.  Since the debut of his solo album Hesitant Alien, the former My Chemical Romance front man has been touring and selling out shows all over the globe. San Diego’s House of Blues was one of the last stops before the tour’s completion at the end of October. Anticipation grew as anxious fans waited for the show to begin. By the time 7p.m. rolled around, the line for the venue wrapped around the block.

There was only one opener before Way took the stage. Tape, a band hailing from San Francisco kicked off the night with a 30 minute set.  It was surprising that such a little known band was touring with such a big name until the lead singer revealed that he’d been friends with Way for years.

Tape was relatively unextraordinary. The high pitched moaning of the singer paired with the atmospheric hallow sound of the band’s music did little to pump up the crowd.

The crowd waited anxiously for Way’s set to begin. Every crew member and tech guy that wandered on to the stage issued excited screams and cheers from the crowd.

Half an hour after Tape’s set had finished, Gerard Way walked on to the stage. Dressed in all black with shaggy dark hair to match Way grabbed the mic and the show began.

“My intention was to make 100 percent uncompromised art, using the currently least radio-friendly instrument, the guitar,” Way said in a statement released on his official band page about his solo album. Way’s solo album, Hesitant Alien, debuted last year.  The singer shifted away from the pop punk concept pieces of his former MCR days and instead found his influence in the Britpop genre. Way sang through the songs on his album and did a couple unreleased tracks too. A track called Ambulance was a major highlight. Way’s raw vocals dripped with emotion on the piano heavy song.

Screams of “I love you!” from fangirl teenagers pierced the air throughout the entire performance. Gifts such as colorful socks and fake flowers were thrown at him from the cheering and singing crowd. The singer took it all in stride.

The concert also featured some short improvised songs about Way’s love for his fans in San Diego. He talked about how much he loves San Diego Comic Con, but that his social anxiety keeps him away from the crowded convention.

Much of his music is based off his experience with depression. During the show, he talked and sang about the subject.  Way encouraged his fans struggling with depression to talk to someone they trust and get help.  He and his music connect with fans in a unique way.

Admittedly the songs sound a bit better on the record than they did live, but as a whole, seeing/hearing the man and the voice behind so much fantastic music was a very cool way to spend a Saturday night.