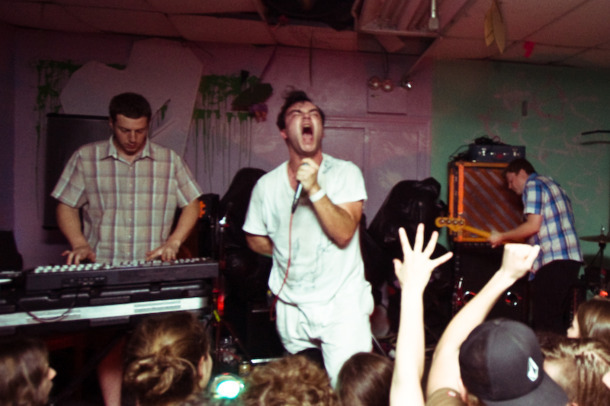 If you are not familiar with Future Islands, now is the time to get acquainted. The four piece band just released their fifth album, “The Far Field.” If you like to dig into a band’s history just as much as I do, then this is the post for you. Here is a crash course in a band that is definitely worth checking out.

“Wave Like Home” (2008)
Only nine songs long, Future Island’s first studio album sounds like it was recorded at home, in your backyard, by you, after you discovered your sibling’s keyboard. It has a lovely, vintage, warm tone – the type of sound you hear in your favorite ’80s flick.
Top Tracks: “Old Friend,” “Heart Grows Old” and  “Beach Foam”

“In Evening Air” (2010)
The group’s second release is just as short as the first. However, this is the album where the identifying sound of Future Islands seems to form.  There is a sense of longing in this album that is simultaneously undeniably heartbreaking and dance worthy. Vocalist Samuel T. Herring belts his heart out in the massive track “Inch of Dust.”
Top Tracks: “Tin Man,” “Walking Through That Door,” “Swept Inside,” “Inch of Dust” and “Vireo’s Eye”

“On The Water” (2011)
If “In Evening Air” is where Future Islands was forming their signature sound, then “On The Water” is where they perfect it. It is this album that really hooked me on Future Islands. Upon hearing “Before the Bridge,” I fell in love, and I’m sure you will, too. Besides that, this also happens to be a big breakup album. So, if you’re going through a tough phase, this is the one for you.
Top Tracks: :Where I Found You,” “Give Us the Wind,” “Before the Bridge,” “The Great Fire” and “Grease”

“Singles” (2014)
After a pretty legendary performance of “Seasons (Waiting On You)” on David Letterman, this album and all their newfound attention catapulted Future Islands into the indie mainstream. It was well deserved.
Top Tracks: “Back In the Tall Grass,” “Doves,” “Fall From Grace,” “Seasons” and “A Dream of You and Me”

“The Far Field” (2017)
The latest release from Future Islands is everything a fan would expect. The lyrical content is a hymn for lovers and the melodies are beautifully haunting. When each track can stand alone as a featured single, you know it is a solid album.
Top Tracks: “Beauty of the Road,” “Ran,” “Ancient Water,” “North Star,” “Shadows” and “Through the Roses”