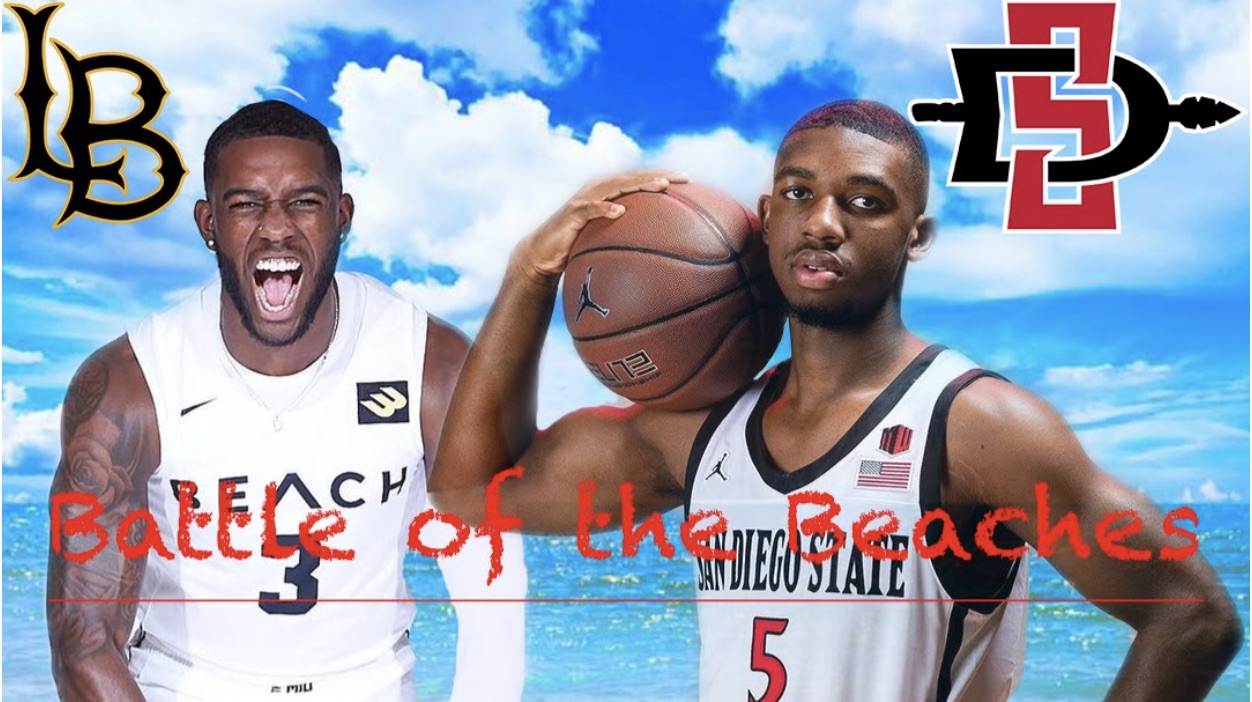 The San Diego State Aztecs faced off against Long Beach State, although they are both state schools the two programs couldn’t be more different. The Aztecs, 5-2, and the Beach, 2-5 are headed in different directions this year.

Long Beach’s starting guard, Drew Cobb, has an interesting story, to say the least. The Senior guard’s journey to Long Beach has not been easy. Cobb, from Sacramento, went to Sheldon for four years and helped lead the team to a top 10 ranking in the state. Although he played well at Sheldon he ended up at Fresno Community College to play ball.

While at Fresno CC, Cobb played in 32 games and held a 4.0 GPA. Cobb would decide to transfer to Long Beach and try to walk on for the team where he later earned himself a scholarship through his hard work and determination.

Early in the game, Matt Bradley was scoring from everywhere on the court, Lamont Butler was clamping up, and Trey Pulliam was directing traffic for the Aztecs. The two teams went back and forth scoring and not much defense was being played.

In the halfcourt setting, Long Beach was scoring easily and held a lead with 11:33 left in the first half. At 11:33, a media timeout was called and that is when the Aztecs flipped the switch. From the end of the timeout to the 2:20 mark, the Aztecs went on an 18-4 run. Defensively, they were getting after it, converting steals into points on the other end.

In the first 10 minutes, Long Beach was able to work for open shots but after the timeout was called, they struggled to even get a shot up. “Last Chance U” star Joe Hampton had multiple turnovers and almost had as many turnovers as points in the first half.

What made the Aztec run possible was how they clamped up on the defensive end. Nathan Mensah brought the crowd to their feet in the first half with a big-time block in front of his own bench. The difference between this game and the UCR, ASU, or UTA game was free throws and three-point shooting. All season SDSU has struggled to shoot the ball but couldn’t miss against LBSU.

In the second half, the domination by SDSU was highlighted by their first 20+ point win and a few big-time dunks. Multiple times, SDSU stole the ball from LBSU and had wide-open lanes to the basket. Keshad Johnson caught an alley-oop and Butler had his second crowd-rising dunk through traffic which caused him to be taken to the locker room after a hard fall.

Long Beach lost this game because of their poor shooting from the line and deep. Shooting 0% from deep on eight attempts and shooting around 50% from the line.

The MVP of the game for the Aztecs has to go to Keith Dinwiddie Jr., who scored 12 points off the bench and brought the energy the Aztecs have missed from the guard position all season. Knocking down threes and midrange shots that he had missed all season allowed Bradley and Pulliam to rest more than they had all season.

SDSU earned a much-needed statement win and LBSU will head back to The Beach to work on their three-point and free-throw shooting.