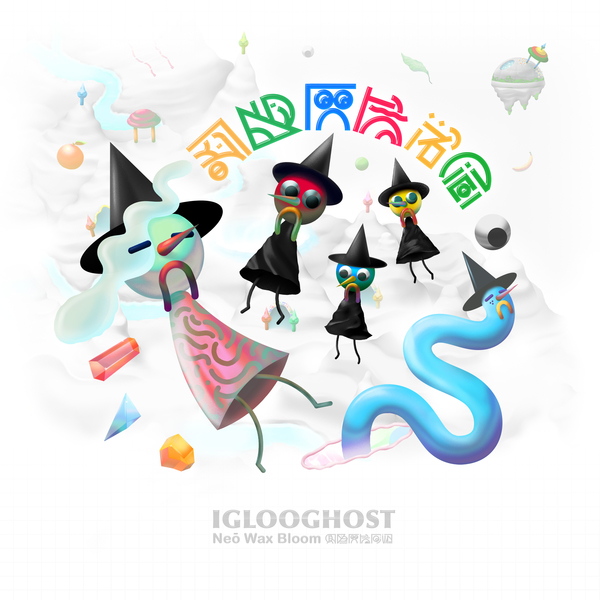 IGLOOGHOST smashes all expectations of what sounds can be mixed together in his debut album “Neō Wax Bloom.” An up and coming beat maker who was discovered by Flying Lotus and was later signed to his Brainfeeder laber, IGLOOGHOST has broken the boundaries on what we consider electronic music. This concept album takes a journey into the fantasy world of Mamu, one which is filled with witches and gods and magic. This album is a fast paced adventure that can leave you equal parts in shock and awe. Every track is a combination of symphonic melodies and off the wall drum and bass. Underneath all of this are samples full of grime, rock, and instruments unfamiliar to a casual listeners ears.

“Pale Eyes” is the first track, which introduces you to a number of sounds that reoccur at different frequencies throughout the rest of the album. If one was to only listen to this song, however, they would be terribly mislead about what is to come.

“Super Ink Burst” begins with a strong saxophone to throw listeners through their first loop in the circus that is “Neō Wax Bloom.” Even with the songs that fly by, they all also sound distinctly unique and creative in their own way. No bar in any track is exactly the same as any other, creating a nonstop barrage of melodies and sounds that are mashed up in every single way imaginable.

As you find your way bouncing between the organized chaos, a brief hiatus is delivered with probably the calmest track, “Purity Shards.”

Just as you catch your breath, the album shoots off again with the chime filled “Zen Champ,” as IGLOOGHOST shows you there are still vast landscapes of Mamu you have yet to explore.

Up next, are the only two tracks on the LP with features. The first one features Cuushe, who’s soft vocals add a soothing aura into an otherwise hectic album. Her voice is met with bass to compliment and a daunting piano melody, exemplifying the variation that IGLOOGHOST is capable of.

As “Neō Wax Bloom” comes to a close, IGLOOGHOST leaves us with one last wild treat – if listeners were still unsatisfied with the pace of the album. “God Grid,” a zany 220 bpm track that will give you whiplash just by trying to follow it as it races around the room at speeds faster than sound, finishes us off.

I would recommend this album to anyone who is a fan of electronic music, especially those who enjoy the fusion of different genres. IGLOOGHOST leaves a strong impression with his first LP and has definitely left me wanting more. At the most basic level, I believe fans of any type of music can appreciate the level of complexity and creativity that IGLOOGHOST has injected into each and every track on “Neō Wax Bloom.”