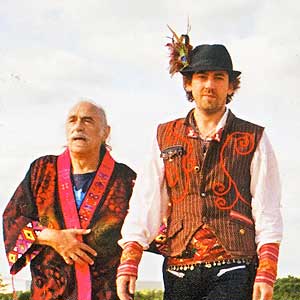 During my senior year in high school, my life was changed when I saw Animal Collective’s Noah Lennox (better known as Panda Bear) perform live in Los Angeles. The music of Animal Collective was the exact antidote that I required to all the turbulence and discomfort of high school. The concert provided confirmation of what I already knew; that I had stumbled onto some truly transformative music and that some of my best and most emotional memories in life will always be scored by Animal Collective.

Just as their music was my answer to high school, the indescribable music of Shpongle has been my answer to college life. I first discovered their music about 5 months ago, and they have already been elevated to one of my 2 favorite artists alongside Animal Collective. And just as my eyes were opened by that Panda Bear show a year ago, my eyes were opened even wider last Tuesday night when I saw Simon Posford perform a Shpongle DJ Set at the San Diego House of Blues.

The complex music of Shpongle requires a large group of musicians to create, but the group officially consists of just two members: Simon Posford and Raja Ram. Raja Ram plays flute and other wind instruments in addition to developing broad melodic concepts for the music. Posford handles all of the electronics/mixing/production and organizes the multitude of different sounds into completed albums.

Shpongle are known for their energetic and visually arresting live performances, requiring sometimes dozens of people on stage at once to recreate the dense textures of their studio albums. However, in recent years, Simon Posford has toured on his own and played the duo’s music through DJ sets in which he’s surrounded by a large psychedelic contraption called the Shpongletron in order to make up for the lack of live musicians. The photo above is the setup that I witnessed last week and it was nothing short of awe-inspiring. Posford mixed together a continuous set of classics spanning all 5 of their studio albums and the visuals of the Shpongletron reacted perfectly to everything he did throughout the set.

Beyond the transcendence of the music and the wow factor of the visuals though, I experienced a feeling of pure elation that I could never put into words. The duo coined the term Shpongle as “an umbrella term for positive and euphoric emotions.” As any of their obsessive fans will tell you with a wide-eyed grin, the feeling of being Shpongled is a sensation far beyond what the English language can cover.

Standing in that crowd, dancing like a maniac with my eyes bugging out of my head, was the freest I’ve ever felt in my life. From the time Posford took the stage to the time he left, not a single thought or distraction crossed my mind. For approximately 2 hours, there was simply nothing else but me and the music. Judging from the facial expressions and body language of the people around me, it was obvious that they were all feeling the exact same thing. It’s impossible to not be happy at one of their shows. Once you have that moment where you realize that he’s put you in a trance and just how Shpongled you really are, your perception of music will never be the same again. I realize that I haven’t even talked about what their music actually sounds like yet, and I won’t spend a lot of time on it. It’s very hard to describe and I think the feeling that I’ve described above is more important than breaking down the literal components of their sound. In fact, part of the reason their music is so mind-blowing is because I often have no idea how they managed to create the exact sounds that I’m hearing. All I can say is that they’ve invented their own genre known as Psybient or Psy-Trance, meaning that they combine modern electronic synthesizers and production with world music influences from cultures around the globe. They combine complex electronic equipment with a ton of live instrumentation and vocalists to produce their singular sound.

I understand that this description will not provide much clarity for those who haven’t heard their music, but like I said, it’s incredibly difficult to describe. Not to mention, I think the type of people who will enjoy their music should have their curiosities peaked more than enough by what I’ve said already. I also think that part of the fun of Shpongle is that first listening experience where you don’t really know what to expect and you realize a few minutes in that you’re listening to something truly universal and timeless, something beyond categorization and even language.

No matter which of their five studio albums you throw on, you’re in for an hour-plus spiritual journey that may even lead you to discover some new things about yourself. I know that I certainly did and am continuing to do so the more that I listen to them. So for whoever may be reading this (even those of you who are skeptical of what I’ve said), I strongly urge you to keep an open mind, put on a nice pair of headphones, and try to get lost in a Shpongle album. I guarantee that even if you don’t like it, you will hear something that you have never heard before. And for those of you whom it clicks with…

Well, once you’ve been Shpongled, there’s no coming back.