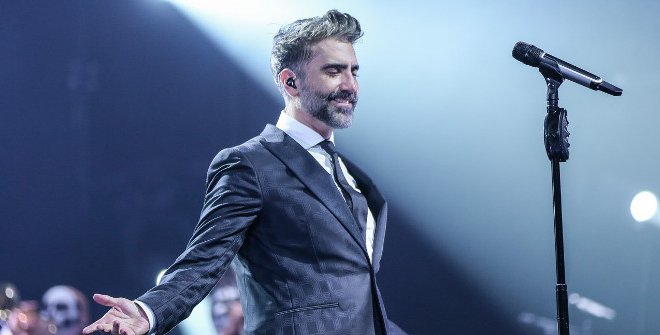 In a current Latin American music climate dominated by Reggaeton beats, Alejandro Fernandez has made his return to Ranchera music. It has been 20 years since El Potrillo created an album dedicated to the genre he made his debut from.

Hecho en México consists of 11 songs with a variety of Mariachi flavors. Songs dedicated to love, heartbreak and cantina-styled ballads rule this album in stylish Charro fashion. It’s also important to note the duet “Menti,” on this album features the king of Rancheras, his father Vicente Fernandez.

“Menti” is the second song that Alejandro and Vicente Fernanzed have recorded throughout their careers. The song centers around regret and heartache, the sentiment s being elevated through the expert delivery of the father-son duo. At the age of 80, Chente still sounds like the King.

There are a couple of songs on Hecho en Mexico that have clear sonic and topical influences from Alejandro’s predecessors and peers. The most noticeable of these influences being his father Vicente. Alejandro’s “Caballero,” visits similar topics and pulls on similar emotions as his father’s “Lastima que seas Ajena.” They both perform ballads on their inability to pursue a love interest because of her relationship status. Sentiments of longing and frustrated passion ring through these songs like few others.

Another noticeable inspiration in this album was Alejandro’s peer, Pepe Aguilar. “Hasta en mis Huesos” has strong similarities in themes  and song structure to Pepe’s “Por Mujeres Como Tu.” Both songs begin softly with trumpets and violins as the vocalists make their entrance. Soft and passionate crooning build slowly toward powerful choruses that are addicting to listen to. Thematically these songs also focus on heartbreak, wistfully singing for their significant other to return to them.

“Por Tu Adios” was a slower song in the track list of Hecho en Mexico. Softer instrumentals that lead the listener to focus more on El Potrillo’s voice and the emotion it carries. It sounds reminiscent of Cuco Sanchez’s “Fallaste Corazon,” with how much space the song has, and how vulnerable Alejandro sounds on it.

Alejandro Fernandez does justice to the Ranchera sound in this return to the genre. The album was loyal to classic sound, yet inspired. Hecho en Mexico is an album that is the perfect length, uninhibited by filler songs that are common in the era of streaming. Every song has its purpose and is well placed. I’m excited to hear more of this type of sonido.