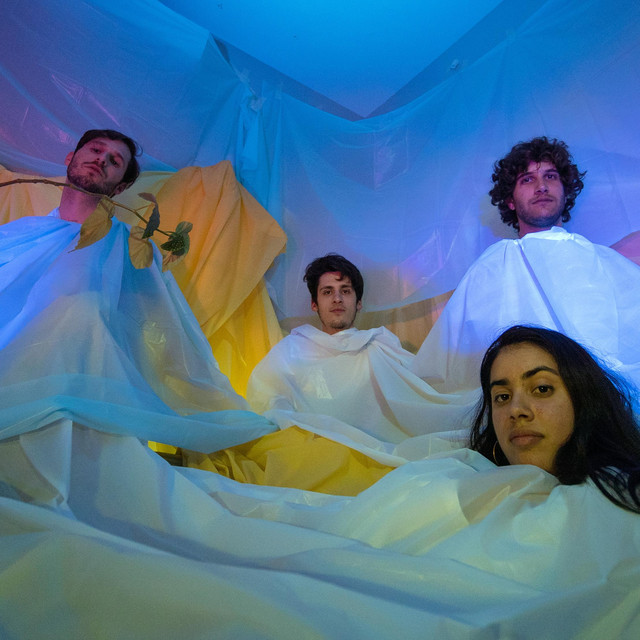 Crumb is one of those rare relatively unknown yet great bands, and I was elated to learn that their tour was taking them to the Irenic.

It was my second time at the venue, having come to see Dreamer Boy and The Marias a week earlier. After arriving, we rushed up the steps and through security, and were relieved to find that, as is common at concerts, Crumb and the other acts were taking awhile to get started.

The Irenic is relatively small; actually a church part-timing as an indie-music concert venue on the weekends. The building breathes with a West-Coast-Protestant energy that recalled to me my own childhood in the church. The tight, utilitarian carpeting and abstract, floral stained-glass lent a sense of irony to the performances of the night. For Crumb, the dissonance between band and setting comes from being a band with a strong psychedelic influence. Everything the band puts out drips with a melting, distorted aesthetic evoking LSD.

Crumb borrows from bands like Tame Impala with pulsing waves of distortion that form an amorphous aural landscape on the back of closed eyelids. When Crumb builds into a song, they suggests something immense, simultaneously fluid and permeable. These heavy psychedelic tones are made more approachable by the addition of light, flirty guitar riffs and the sweet, husky voice of Lila Ramani. Ramani is in many ways the heart of the band. As PASTE Magazine reports, Crumb was really formed in order to flesh out several songs that Ramani had already created. This attachment to the music was clear as I watched her on stage. The soft tones of her voice and the quiet concentration on her face as she played the guitar spoke to the intimacy she has with the songs. The lyrics often tend toward a quiet, contemplative melancholy, as if they are thoughts floating through her head while lying in bed.

Unfortunately, the sound system at The Irenic proved to be frustrating. There were a couple of brief bouts of moaning feedback from the speakers, and in general I felt that the tinkling subtleties of Crumb’s music was lost to a setup overly focused on booming bass. After hearing their performance live, listening to them again with headphones on gave me an “Oh, this is why I listen to Crumb” revelation. The music is so layered and complex, and unfortunately some of that was lost at this particular concert. Despite this, Ramani’s voice was unaffected by the limitations, and seeing the band jam together was well worth the price of admission.

Crumb is really just starting out, and the future of the band is exciting. Despite only releasing a total of eight songs over 2 EPs, Crumb’s monthly listeners on Spotify are crawling towards the one million mark. I hope that with the imminent release of their debut album, the band will begin to get the attention they deserve. Trippy, experimental aesthetic aside, Crumb’s music is simply beautiful, catchy, and fun.