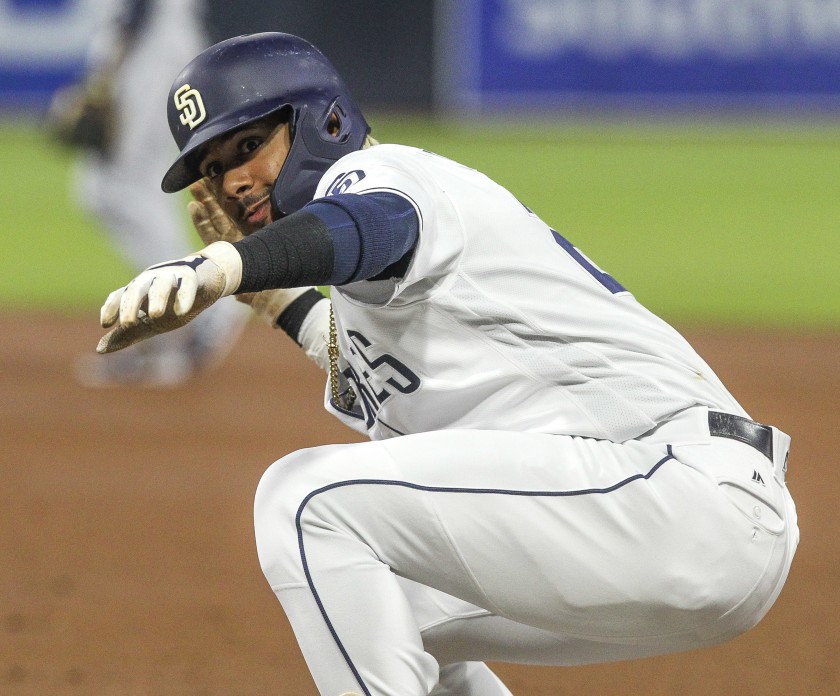 The San Diego Padres look to improve their offensive game despite a minor setback early on in the season.

The hometown team, who entered the week at 30-29 and are only two games back of the second wild-card spot, are looking to heat up in the final stretch before the All-Star Break.

Today, we are going to dive into a couple of Padres topics.

For the past five weeks, the Padres have been playing without their shortstop phenom and No. 2 prospect across MLB, Fernando Tatis Jr. Fortunately, their backup shortstop – Manny Machado – has played great since his departure.

Before the team’s top prospect went down, the combination between Machado and Tatis Jr. filling the left side of the infield saw a glimpse into what the next 10-plus years could look like for baseball in San Diego.

That glimpse would turn to a pause after the Padres lost to the Nationals, 7-6 in 10 innings on April 28. Tatis Jr. went down after overstretching for a ball at second base and pulled a hamstring

With hamstring injuries, the timing is uncertain as to when a player will return, but it all depends on the muscle itself. Some take a couple of days; some take a month or two.

However, some good news came this past weekend for Tatis Jr. and the Padres.

Tatis Jr. began his rehab assignment this past Monday in Double-A Amarillo (Texas) in hopes to return to the team by the end of the homestand or early next week.

In that game he would go 1-for-3 with two walks. That hit would be an infield single that he legged out. Despite having a throwing error, he would steal a base for the Amarillo Sod Poodles in their 8-5 loss against the Frisco RoughRiders.

As a result of baseball’s No. 2 prospect going down, Machado moved over to shortstop and the backups at third base have not been as consistent.

The Padres have used a duo between San Diego State Alum Ty France and San Diego-product via Valhalla High School Greg Garcia to fill the gap to cover the hot corner. Although France and Garcia have seen playing time at the hot corner, the consistency has not been there.

Tatis Jr. posted a batting average of .300, hit six home runs and also had six stolen bases, with most of those coming in the leadoff spot before he got injured.

Not only does this affect the hot corner, but it also has an effect on the leadoff spot. Since Tatis Jr. went down, the combination of Wil Myers, Garcia, and Ian Kinsler plays a key hitting role in the top spot. Garcia secure the most time in the leadoff spot, but the same theme of inconsistency transpires.

Besides Tatis Jr. working back from his injury, others are also starting their rehabilitation assignments. Both outfielders Jose Pirela and Franchy Cordero started their rehab assignments last week in Triple-A El Paso and are close to making a comeback.

The most notable player completing his rehabilitation assignments is pitcher Dinelson Lamet who is coming off Tommy John surgery a couple days before Opening Day last season. Lamet is on schedule of the rehab process, which is usually around 12-16 months and, if all goes well, is on pace to rejoin the Padres at the end of the month.

Despite the injury to Tatis Jr., the Padres have been able to hit the ball well. Although the Padres are 14-15 since he went down, the bats have been staying alive.

First baseman Eric Hosmer has stepped up over the past month. After hitting under .200 in the season’s first few weeks, he has brought his batting average up to .300 last week that includes posting a 10-game hitting streak, which ended Sunday.

The Padres are ninth in all of baseball (and fourth in the National League) with 89 home runs (as of June 4). Outfielders Hunter Renfroe and Franmil Reyes, who have each recorded 17 home runs so far, have kept the offense alive.

Everyday, there has been at least one player to keep the offense going.

As the calendar gets into the heart of June, the next couple of weeks will determine whether or not the Padres will be playoff contenders as well as buyers or sellers (or stand pat) as the Trade Deadline looms in July. The Padres could even look at getting a starting pitcher such as free agent Dallas Keuchel or Cleveland Indians starting pitcher Trevor Bauer to bolster a young rotation.