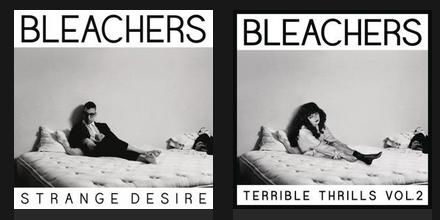 Jack Antonoff, lead singer and songwriter of  indie rock/pop band Bleachers, has released a new version of the band’s first album Strange Desires. The re-release, entitled Terrible Thrills Volume 2, is not performed by Antonoff though. Instead, the album guest stars a different female vocalist for each track.

Sarah Bareillis, Charlie XCX, and Sia are just a few of the big-name artists who collaborated on the project. The new album has all the same songs as the original but a very different sound.

On Monday, September 28 Antonoff announced that the Terrible Thrills was complete and  available online for free. Antonoff says that he writes music with a female voice in mind. He was inspired to do this project as a way to get what was in his head out into the world.

“When I write songs I typically hear things in a female voice and then match it an octave lower so i can hit the notes. That’s why so many Bleachers’ songs are sung so low. I could change the key but I like things sounding like a male version of what in my head was a female-sung song. I’ve always written this way. So with that in mind I wanted to release a version of my record that spoke to how it was written and the ways I originally heard it in my head before I recorded and sang it.” he said.

Each female vocalist was assigned one of the 11 songs to make her own. Some artists did a simple cover and worked with Antonoff on production, while others independently recorded and recreated his songs.

Sia’s heart aching rendition of Like a River Runs is perhaps the highlight track of the reworked record. Carly Rae Jepsen’s bubble gum pop take on Shadow and Brooke Candy and Rachel Antonoff’s rap filled version of Take Me Away are perhaps the lows.

Terrible Thrills is an eclectic mix. It is definitely worth a listen (or two or three), but should be taken for what it is – an accompaniment.  The original album possesses a fervent energy wrapped in an  indie rock cover and some 80’s nostalgia that this cover album just can’t come close to. The introspective lyrics seem emptier without their original writer’s deep and haunting voice to accompany them. It leaves something (strange) to be desired, but is an impressive collaboration and eclectic mix of styles.

Antonoff is very happy with the outcome. He told fans that he loved how Strange Desire has evolved over the past year and a half. “This project took a year and tons of recording sessions and through that we all felt very proud that something as intense as a full album could be given to the people who bought the original work as a further look into it,” he said.