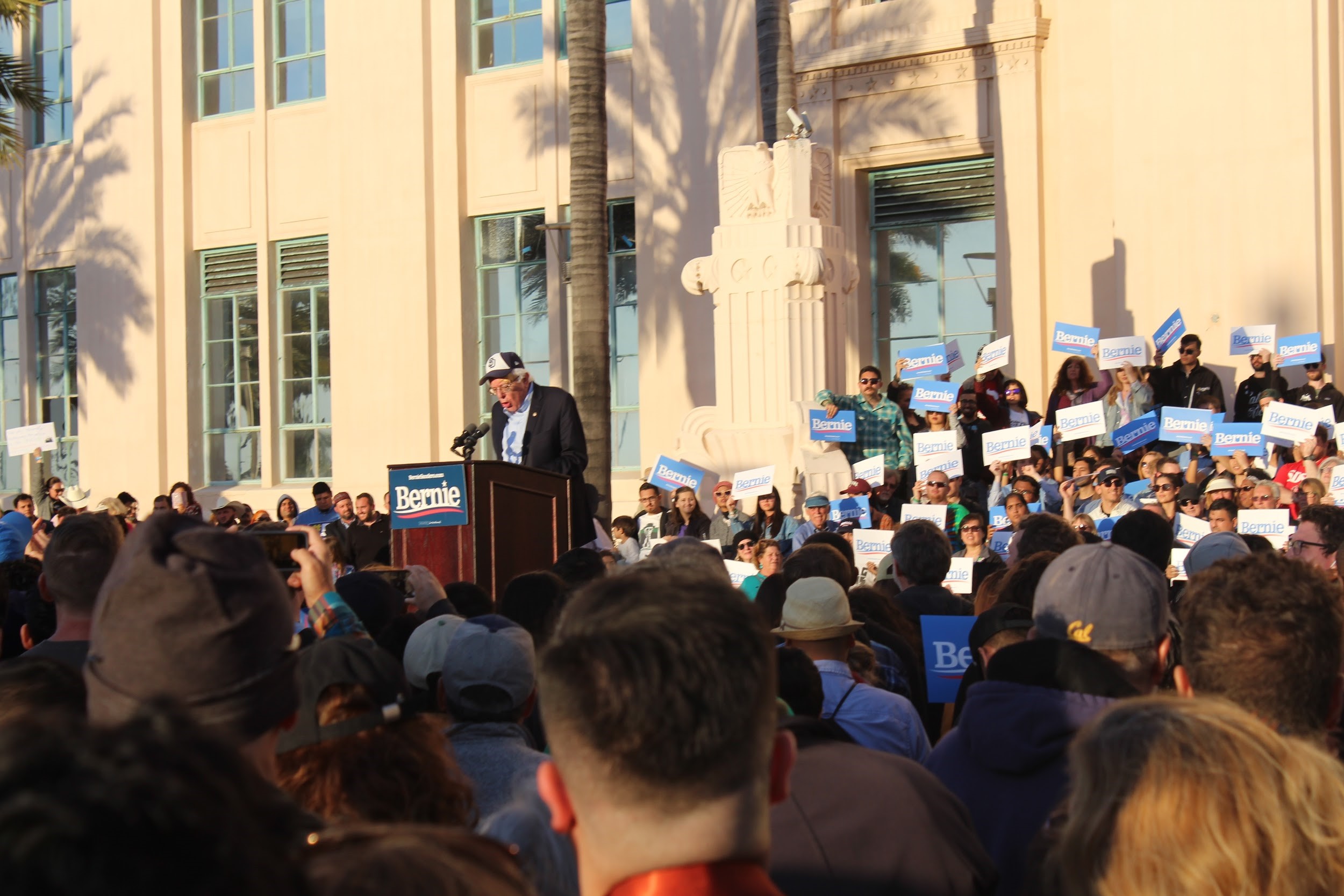 On Friday, March 22, Democratic Presidential candidate Bernie Sanders set off his 2020 campaign with a rally in Downtown San Diego addressing economic and social issues to a crowd of more than 6,400 people. This is Sanders’ second campaign visit to San Diego since his 2016 campaign.  Similar to before, the rally held Downtown drew a diverse and energetic crowd of supporters.

The Vermont Senator has been very outspoken about his Progressive policies since his 2016 Presidential campaign trail. Today, Sanders remains a staunch advocate for raising the federal minimum wage to $15 an hour, universal health care, and free public college as well as significantly reducing student debt. These policies have been popular amongst his followers. Sanders initially directed his speech towards the younger people in the crowd by referencing the need for quality education in the U.S.

“Good jobs require a good education. That is why we are going to make public colleges and universities tuition-free, and substantially lower the outrageous level of student debt that currently exists.”

But Sanders knew his message couldn’t entirely focus on the younger generations. He then honored the historical significance of the rally in an aside.

“Given the fact that FDR was one of the great presidents in the history of our country, I am honored to be here in this very spot 80 years later.”

By the end of the speech Sanders, told the crowd that he has not forgotten his experience of when his family lived paycheck to paycheck, and how he will always remember where he came from.

Janice Ocampo, a USD student, attended the event and said that the rally was important to her. “I am middle class and come from an immigrant family and so I need to understand and have a better perspective on how I fit in in all of this and transform our nation for the better.” Ocampo said.

Ocampo said that Sander’s policies were ideal and feels pretty strong about them, “All of them I really agree with, from immigration, health care, women’s rights and of course public education for us.”

Michelle Mendoza, a 26 year old San Diego resident, stated her ideological connection to Sanders: “What attracts me about Bernie Sanders is that he is one with the people; He understands and also gives good points about what it’s like for the average American not just the one percent.” said Mendoza.

“Thank you for being part of a campaign which is not only going to carry California, which is going to win the Democratic nomination, which is not only going to defeat Donald Trump, the most dangerous president in the modern history of our country – but with your help we are going to transform this country… When we are in the White House, we are going to enact what Franklin Delano Roosevelt talked about… We are going to guarantee a job to everyone who is able to work in this country. We need to rebuild our infrastructure, we need to transform our energy system… There is more than enough work to be done in this country. Let’s go out and do it.” said Sanders. ”