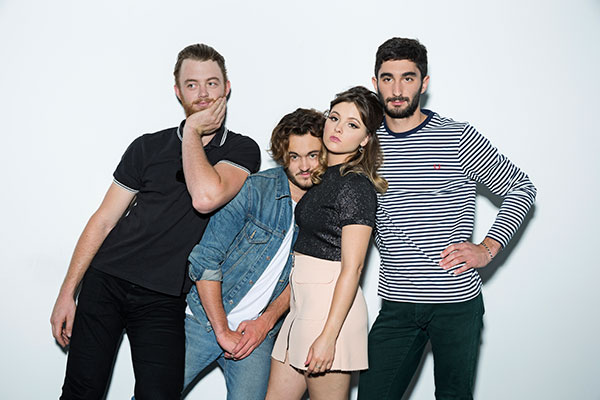 Bands can evolve for years, creating new sounds that draw listeners in. However, for San Cisco, this Australian band has reconnected with their roots and put out a new track called “B Side”. The song’s bright, clean guitar sound and catchy melody pays homage to their 2012 self-titled album with popular tunes like “Fred Astaire”, “Nepal”, and “Awkward”. The simple yet infectious clean guitars in “Fred Astaire” give it a 50’s vibe. The synth, on the other hand, adds a modern sound recognizable in Vampire Weekend songs. Other stand-out tracks like ‘Awkward’ with its distinctive groovy bass and thumping drum beats, and “Nepal” with its dreamlike guitar effects has made San Cisco’s debut album a personal favorite. Their second LP Gracetown, on the other hand, takes a subtle but different approach.

Gracetown carries a more mature sound. They ditch the pure indie pop for psychedelic, hip-hop, and disco leanings. Lead guitarist Josh Biondillo adds more complex and creative hooks listeners can groove to. Complimenting the bouncy riffs and melodies, Scarlett Stevens shows off her exceptional drumming and even her pipes in “Magic”. Nick Gardner’s ingenious bass lines bring depth to the songs while Jordi Davieson’s lyricism and dreamy vocals tie every aspect together.

The record opens up with “RUN”. The bass line is an immediate stand out and the jangly guitars are nice changes from the usual clean effect. Including “RUN”, “Magic” and “Bitter Winter” are the best tracks on the album. Nevertheless, in spite of raving reviews, Gracetown fell flat for me. I appreciate San Cisco’s musicianship and maturity as a band, but I also miss the bouncy pop vibe from their debut album.

‘B Side’ takes me back to the self-titled days. The clean guitars, infectious riffs, and Davieson’s melodious vocals gave me a little spring to my step. Even the endearing lyrics in the chorus aren’t cringy at all, but sweet and fun. Overall, it’s a solid track and a solid “B-side” to their new single “SlowMo”. I’m excited to hear their upcoming record so stay tuned for more updates!