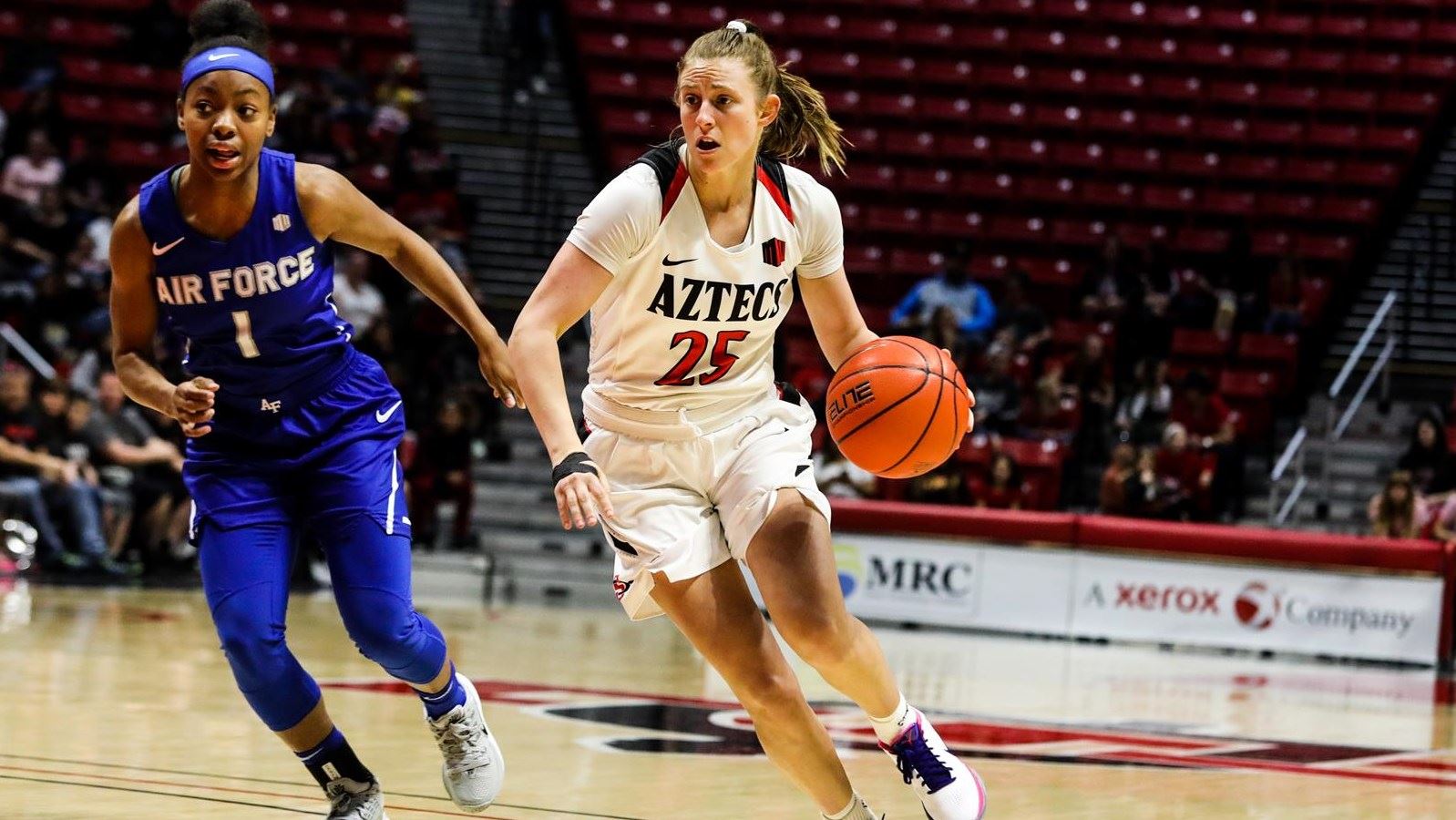 San Diego State’s Sophia Ramos had her game-winning three point attempt hit off the front of the rim as the buzzer sounded. The Aztecs fell 51-49 against Air Force on Saturday afternoon at Viejas Arena.

The Aztecs had two plays drawn up, as they were unsure if Air Force would be in man or zone defense. The team had to think on the fly, and Ramos had a good look, but it just didn’t fall.

Missing shots was the story in this one. The Aztecs went 1-10 from three-point range and shot only 34% from the field.

“We knew it would be a defensive battle and those games are fun if you come out on top,” senior Taylor Kalmer said. “We had a couple of defensive slip-ups at the end we have to learn from that and take it to the next one.”

It was a hard defeat for the Aztecs, as they lost ground in the conference standings. “We missed an opportunity tonight to take a big step up in our conference,” Head coach Stacie Terry-Hutson said. “Boise State lost at home tonight, Wyoming is in a tight one, and UNLV is losing right now.”

If the Aztecs handled their business, it could’ve propelled them to a better spot in the Mountain West. However, Kalmer set an Aztecs record on Saturday. She has scored at least 10 points in 19 straight games.

“To be honest, I don’t really care because we lost.” Kalmer said, “I’m just trying to help my team any way I can.”

Terry-Hutson heaped praise onto Kalmer, as she noted her high usage rate along with her energy on both sides of the ball. She finished with 11 points, three rebounds, and four assists.

“We have historically been more of an offensive team,” Zayn Dornstauder said. “Tonight we showed our defensive side.” She finished with 11 points and five rebounds.

This is what the Aztecs can build on, their strong defensive outing as March approaches. Up to this point, the Aztecs let a couple of games slip past them with errors on defense down the stretch.

“Defensively I was really proud of our effort up until the last couple plays,” Terry-Hutson said. “I thought we did a good job on the scout, they knew what was coming before it was coming and we were able to get in there and make it ugly.”

The Aztecs’ defense wasn’t the problem today. It was their offense that couldn’t find a rhythm, Ramos and Kalmer combined to shoot 9-for-32 from the field.

“Neither of us could really get into a groove,” Kalmer said. “It’s frustrating that we couldn’t take care of business at the end.”

The Aztecs will play again at home on Feb. 15 against Boise State.