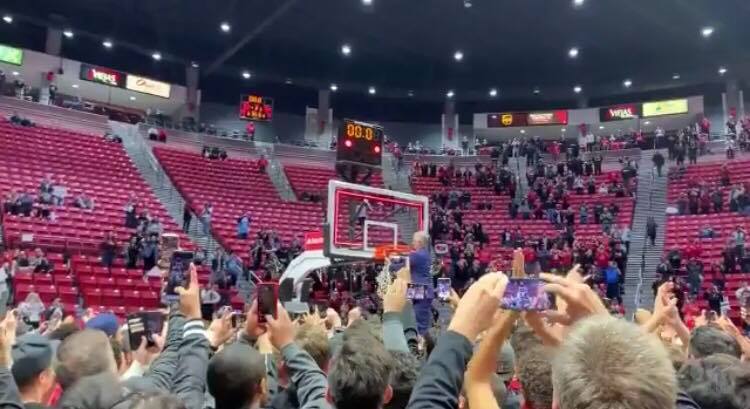 The buzzer sounded and fans roared, as the No. 4 team in the nation clinched their 12th Mountain West championship against New Mexico on Tuesday night. The Aztecs beat the Lobos 82-59.

Coincidently, the Aztecs defense came alive in the second half as well. They were able to contain a deadly offense to 26.5% shooting in the latter half.

SDSU also forced 17 turnovers, but did have 15 turnovers of their own.

“They got me pretty good,” He said.

The Aztecs were led by junior Matt Mitchell, who finished with 22 points and 12 rebounds. It was his first career double-double.

Mitchell needed 15 points tonight to  attain 1,000 career points as an Aztec. Just before he reached the milestone, he ferociously threw down a dunk to start half number two.

“I honestly didn’t know there was somebody under the rim until I took off, but at that point, it was bad for him.” He said.

Yanni Wetzell finished with 20 points, nine rebounds, and shot 77% from the floor.

“I’m still in awe right now.” Wetzell said. “It means that much more because of all the adversity we went through last year. You never expect to go undefeated in February and win a conference championship without losing a game.”

The Aztecs carry a chip on their shoulder, and feel like they have to win every game because they’re 25-0 and still aren’t ranked number one. If the Aztecs hold this grudge, it could help them make a run come March.

It seems as if SDSU’s student section deserves credit for this blowout win as well. The Lobos’ Corey Manigault was ejected for two technical fouls and New Mexico players heard the shouting and yells all game long.

The Aztecs will try to cut into the Bulldogs’ record when they  play against Boise State on Feb. 16