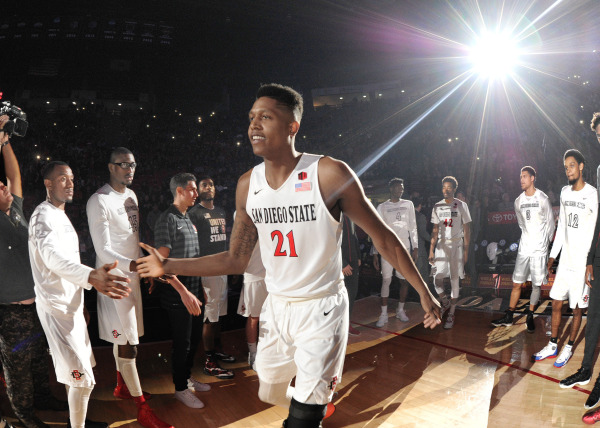 The San Diego State men’s basketball team has had its ups and downs this season. After being selected to win the Mountain West conference in the preseason, the Aztecs find themselves fighting for a sixth place finish in the conference alongside Fresno State. The record does not reflect the fight and passion Aztecs head coach Steve Fisher and his squad have put in, as most of the losses were by 10 points or less.

The Scarlet and Black have an opportunity to avenge one of those losses as Air Force travels to Viejas arena for the final home game of the season on Thursday night. The last time these two teams squared off, Air Force walked away with a 60-57 nail-biting win, leaving the Aztecs with a frustrating trip home.

There’s no doubt that this game will a lot of hype around it. It’s not only a revenge game and the last home game, but it’s also senior night in San Diego. Dakarai Allen, Matt Shrigley, D’Erryl Williams, and Valentine Izundu will all be honored pre-game in the starting lineup alongside Malik Pope. Allen, Shrigley and Williams started their SDSU careers during the 2013-14 campaign.

Air Force comes into this game boasting an offense that averages nearly 75 points per game, while the Aztecs average just 69 points per game. The strong suit of this SDSU team has and always will be defense, thanks to the program and philosophy of coach Fisher.

Beneath Fisher’s tutelage, SDSU has allowed just 63 points per game, a tremendous feat in Division I basketball.

Keys to the game for SDSU will be defensive pressure, handling the ball, and keeping the foot on the gas in the second half. The Aztecs have averaged at least a 10-point lead in each of their conference losses this season, and it has been the primary concern among Scarlett and Black fans.
Tipoff is at 7 p.m. at Viejas arena Thursday night. Coverage will be provided live via Twitter from @KCRsports.