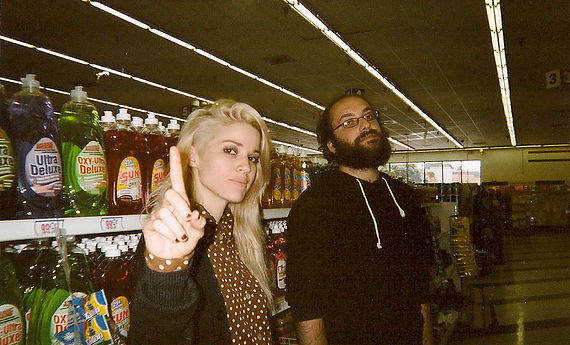 Dirty Dishes are a Garage-Rock/Punk trio from Brooklyn, New York. Their music is nostalgic of 90’s grunge, but with enough refreshing composition from lead singer/songwriter Jenny Tuite to create a style unique enough to call their own. Jenny and bassist Alex Molini have been touring and releasing records under the name since 2009. On March 3rd 2016, I had the privilege of interviewing them as they continue on their North American spring tour for their 2015 album “Guilty” and recent single “All Of Me”.

As I sat on a park bench near the Koi pond of SDSU, I received a call from Jenny Tuite: Lead Singer and guitarist for dirty Dishes. They announced they were stuck in traffic and wouldn’t be in San Diego in time for the interview, so we agreed to continue the interview over the phone.

As I spoke with Jenny, she talked about their tour so far and what we can expect from them in the future:

“The tour’s been going really well so far. We’ve never played a show in San Diego before so this is a first for us. We don’t have any plans to release an LP anytime soon but we have new songs that we’re always hashing out and playing live, so most likely we’ll be in the studio sooner than later to work on those— for now we’ve just been trying to play as many shows as possible.”

I also asked her about their music video “Thank You Come Again”, which came out last year and is featured on their full length LP “Guilty”. The video features close ups of old people eating doughnuts and various depictions of Dirty Dishes bassist Alex Molini, doing weird stuff like eating dog food and pouring a gallon of milk over his head. It was written and filmed by their friend/comedian Pat Bishop. On the topic of the conversation Jenny talked about their experiences on the music video:

“I was in the laundry matt one day and thought it might be cool to film a music video there but that didn’t work out. Then Alex and I decided to film it in a grocery store, but no grocery store was willing to let us do that. Finally, we went to our favorite doughnut shop Ms. Donuts, and they said we could film there, so our friend Pat volunteered to help film us. It was a really fun experience because it was one of the first legit music videos we had ever done before.”

The band released a self-titled debut LP independently back in 2010 as well as a 2012 follow up EP, however, they hadn’t released anything signed to a record label until they released their 2015 album “Guilty” last January on Exploding In Sound Records.

On the topic of the subject I asked Jenny how they managed to get involved with Exploding In Sound:

“Our friend Dan from Exploding In Sound was a big fan of ours for years and he would always come out and show support at our shows— eventually he talked to us about being on his label Exploding In Sound and we’ve been working with them ever since we released ‘Guilty’ last January.”

Their most recent single “All Of Me” was written and recorded roughly over a year ago around roughly the same time Guilty was recorded, however, it wasn’t released until this past February.

When I asked why they never released the single along with the rest of their album last year, Jenny responded:

“Yeah we wrote it around the same time as the album but we kept putting it off and eventually just kind of shelved it. That was one of the songs along with a few others that we still play live but we just never got around to releasing it until recently.”

Dirty Dishes will be continuing their North American tour all the way through June. They will also be touring along-side What Moon Things throughout March and April. You can view their music video for “Thank You Come Again” below.