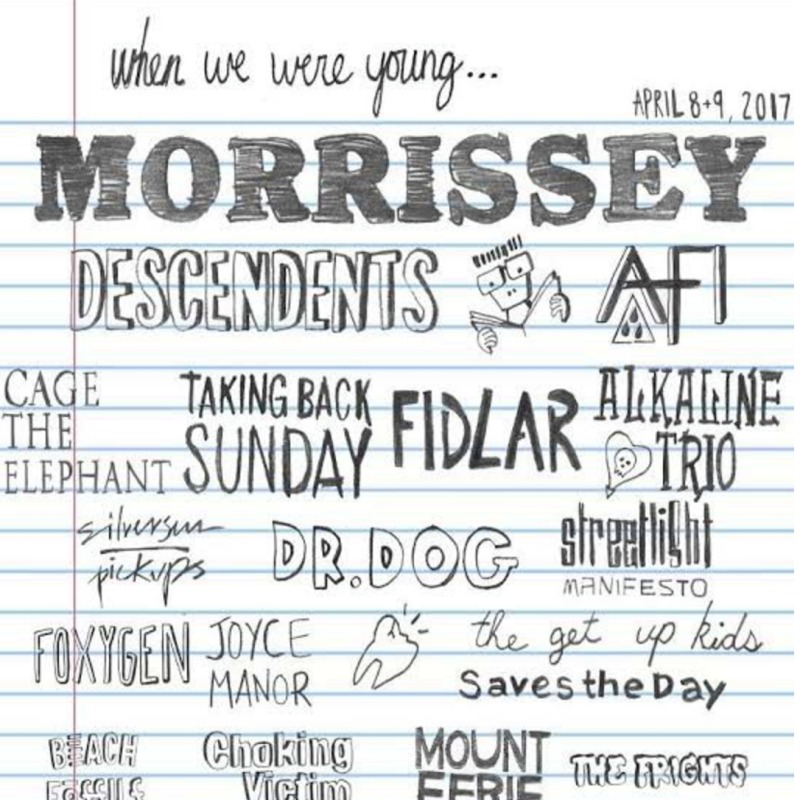 If you wear thick black eyeliner to match the five coats of chipped black polish on your fingernails, then you should be busy on April 8th and 9th. When We Were Young is a two day mini music festival paying homage to all of your feelings – it even has the biggest sad-boy of all time closing out the event: Morrissey. Happening at the Observatory in Santa Ana, a two-day pass starts at $175. There are 30 bands playing. Featuring punk, emo and garage rock acts, When We Were Young offers an array of artists that will surely make your heart swell. Besides the headliners like Morrissey, AFI, Decedents and Cage the Elephant, here is a lineup of some of my favorite artists that will be at the event. If you find yourself there too, check them out.

The Tijuana Panthers is actually a three piece band from Long Beach, CA. Their sound is very ’50s beach rock, but at the same time appeals to punks. If you ever want to go to a genuinely fun live show, the Tijuana Panthers should be your go-to group. Luckily, the band comes down to San Diego quite often.

Joyce Manor is yet another SoCal band that has been associated with the modern form of emo-pop-punk that experienced a surge in popularity a few years ago. They are a favorite among angsty teenagers, but can still fill the void in angsty twenty-somethings (me). Frontman Barry Johnson is, however, very vocal about his dislike of crowd surfing, so if you’re there don’t be that person.

Silversun Pickups hit the scene when they released “Lazy Eye,” which was a radio hit back in 2006. Now, 11 years later, the group is still going strong.

The Frights can easily be placed in the same genre as the Tijuana Panthers. They are described as a punk band, but the group is very playful. And, they’re from San Diego, so supporting them is supporting your local musicians.

Another band from San Diego, Pinback is a bit of a legend. Formed in 1998, Pinback has a solid catalog of work, and each album only gets better.

Sheer Mag is a band for those who love and miss classic rock. The group sticks to the basics: guitar, bass, drums and awesome vocals from their leading lady. Even their logo belongs to the glory days of ’80s rock.

Turnstile is probably the only hardcore band in the line up. They’re a favorite in the hardcore punk scene and their shows are known to get pretty rowdy. So if you check them out, make sure to have your guard up – you don’t know whose feet will come flying at you.

Choking Victim is a ska-punk band from the ’90s. It’s rare that the group is playing a gig, seeing as the band split in the late ’90s. See them while you can. With this group, however, it’s best if you become acquainted on your own.

Dr. Dog is an extremely underrated band that has a large discography but doesn’t seem to get enough air time. They have beautiful, catchy melodies that will surely make them one of the more chipper bands of the line up.

Taking Back Sunday has consistently released albums since the late ’90s, however they became mainstream in the early to mid 2000s. They are one of the giants in the pop-emo (if you will) genre and are known for their feud with my personal favorite band, Brand New. In any case, they’ve got enough sass to match yours.

Featured Image Copyright When We Were Young 2017. Retrieved from retrieved from http://consequenceofsound.net/2017/02/the-inaugural-lineup-for-when-we-were-young-fest-is-an-emo-kids-dream-come-true/.