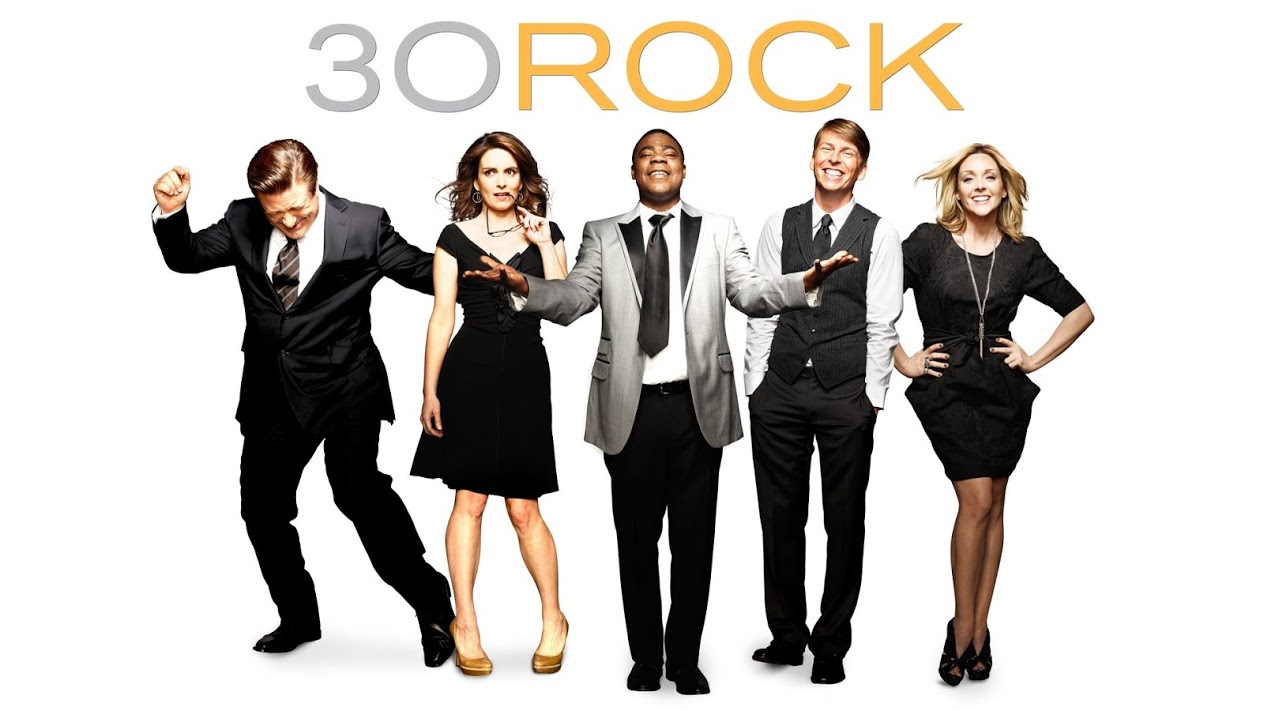 Following a binge-session which cost me a week of sleep, three tubs of ice cream, and my sanity, I can officially say that 30 Rock is by far the smartest and funniest sitcom of this era of television (this is purely subjective, of course, but that doesn’t make it less true.)

More or less, 30 Rock is a celebration and a satirical critique of television today, specifically sit-coms and Saturday Night Live (which the show within the show, The Girlie Show, is based on). Tina Fey, the creator and writer of 30 Rock and also the master of satire explores a wide variety of themes throughout the show such as racial identity, gender stereotypes, female identity in the workplace, product placement, and sexism. It’s a good thing that 30 Rock in all it’s hilarity is fully on Netflix because what good is a show if you can’t share it? When we are introduced to Liz Lemon, the head writer of the sketch comedy show which “30 Rock” is centered around, we see her in line waiting to get a hot dog outside of 30 Rock, AKA the Rockefeller Center. Fed up with the snooty businessman cutting the line, she impulsively buys all the hot dogs at the stand to prove a point. No one is going to cross Liz Lemon.

Immediately, we see Liz Lemon as she really is, a take no sh*t woman. She’s not a weak submissive female character. She’s a strong progressive female in the workforce! Hurrah for breaking gender stereotypes!

Unfortunately, making a character in a television show a woman who is obsessed about her work comes with stereotypes that we have seen before in television. The working woman, according to these stereotypes, means that Liz Lemon: Anyways, we are introduced to Jack Donaghy, a newly appointed NBC executive, (inspired after SNL showrunner Lorne Michaels) who comes in and wants to rework “The Girlie Show” and add a celebrity comedian to the cast, Tracey Jordan. The relationship between Liz Lemon and Jack Donaghy is one that is initially conflicting and eventually develops into a friendship. In Liz Lemon’s first meeting with Jack, Jack nails this working woman stereotype explicitly saying that Liz Lemon is…

Sure. I got you. New York third-wave feminist, college educated, single and pretending to be happy about it, over scheduled, undersexed, you buy any magazine that says “healthy body image” on the cover, and every two years you take up knitting for… a week.

We are introduced to Liz Lemon’s best friend from Second City Improv, Jenna Marone, who is also the star of the sketch comedy show, The Girlie Show. Much like the divas Tina Fey has probably experienced on SNL, Jenna Marone is your stereotypical blonde diva, who probably thinks she’s more funny than she actually is.

She is emblematic of American T.V. culture’s obsession with the funny white blonde girl, a trend perpetrated by Lisa Kudrow during the “Friends” era. Much like Jenna Marone is a product of the blonde trend behind Lisa Kudrow, “30 Rock” is a product of such television superficiality. Tracy Jordan, a comic mash-up of Chris Rock, Kevin Hart, with a hint of Eddie Murphy, comes in and takes over the show with his charisma and movie star appeal. After Tracey Jordan arrives “The Girlie Show” is promptly changed to “TGS with Tracey Jordan” to Jenna’s dismay. It’s something that Jenna cannot compete against, charisma is something that cannot be taught.

For me Tracy Jordan is the most complex of the characters, because we view him mostly as a black stereotype (or should I say African American stereotype), however his character explores this idea of black identity in the comedy world where it is easy to get shoe-horned in as “black” humor.

Cause I’m gonna drop truth bombs. You know how pissed of I was when US weekly said I was on crack? That’s racist. I’m not on crack. I’m straight up mentally ill!

Hilarious as he is, Tracy Jordan allows for the audience to explore the role of African-American comedians in television today. Especially, in light of SNL’s big racial diversity scandal, where they were accused of being racist because they had a mainly all-white male cast, Tracy Jordan becomes more important as a comedic character who embraces his racial identity and plays off of it. What highlights this idea of racial identity even more is  his foil character, proud black Harvard graduate, James “Toofer” Spurlock, who finds Tracy a disgrace to the African-American community because he feels like Tracey instills this stereotype. The banter between Tracy and Toofer is hilarious as we can observe the variety of ways a person can be “black” so to say.

Tracy: “I’m trying to tell him he’s my brother. We’re the only two blacks on the show. We have to figure out a way to work together. Like Professor Martin Luther King said, “I have a feeling.”

Toofer: “It is Doctor Martin Luther King, and he did not have a feeling, he had a dream.”

Tracy: “You know what I think? I think you’re ashamed of being black, and you’re an embarrassment to your community.”

Toofer: “I embarrass you? You embarrass me, and do you know why? Because there are racist people in this world, and when they see you act like a fool, they assume we’re all fools.”

Tracy: “That’s it. That’s the sketch we should write!”

Tina Fey provides us with two examples of the black identity, and more importantly, the subjective nature of racial identity. The way we embrace our racial identity is personal and differs from person to person, which leaves no one room to judge in what ways someone can be “black.”

More importantly, Tracy Jordan is also emblematic of how comedians also battle their demons. Saturday Night Live, since its inception, has seen many of it’s star cast members struggle from addiction, alcoholism and other personal demons. Darrel Hammond, Chris Farley, and John Belushi all suffered from severe drug addictions and crippling mental illnesses, and only one came out of it alive (I’ll leave you to find out who it was).

“30 Rock” embraces these stereotypes and tropes we see in everyday television, which prevents it from slipping into parody and elevates it into smart satire. It’s self-awareness is what makes “30 Rock” a reflective look on comedy and the medium of television. One of the likable characters of the ensemble, cheerful southern born NBC page, Kenneth Parcel is one of us as he is the only one, among the cynical TGS writers and Liz Lemon, who truly appreciates and understands the beauty of television.

Do you know why I put up with this pitiful job, Mr. Donaghy? Why I fetch these folks’ lunches and clean up their barfs? Because they make television. And more than jazz or musical theater or morbid obesity, television is the true American art form. Think of all the shared experiences television has provided for us, from the Moon landing to the Golden Girls finale; from Walter Cronkite denouncing Vietnam, to Oprah pulling the trash bag of fat out in the wagon; from the glory and the pageantry of the Summer Olympics, to the less fun Winter Olympics. So please, don’t tell me I don’t have a dream, sir. I am living my dream.”

Television is the true American art form, an experience that unites audiences across the United States together. More recently, we were made aware of this through the Oscars, the Winter Olympics, the Breaking Bad finale, and the 2012 election of how important television is as a medium to the fabric of our culture.

As a shared experience, Tina Fey acknowledges the power of television and through her satirical look at it from “30 Rock” she uses it as a mirror to reflect society.

“30 Rock” takes us through Liz Lemon’s and many of the people who work around her’s personal struggles and demons. However, as different and conflicted as the ensemble cast seems, they are all united with one goal, to make good television.

As Tracey puts it,

Our comedy got to do more than make people laugh. Got to make people think. I want to hold a mirror up to society and then win world record for biggest mirror.

People often criticize television as an art form, however what “30 Rock” proves is that whether we like it or not, television is more than just images on T.V. It’s an actual art form. By presenting this tired stereotypes of television and parodying them, “30 Rock” is basicall Tina Fey’s love letter to television. Her deviation from these stereotypes is what makes this show hilarious.

It’s a shame that while “30 Rock” was on air that it won a bunch of Emmys, yet it tracked very low attention from the public. Ironically enough, we can experience “30 Rock” on Netflix, which is kind of killing the art of television, however that rant is one for another time.

You can watch “30 Rock” on Netflix. Make sure to listen to 18 and Not Pregnant, Monday nights at 8PM on KCR!