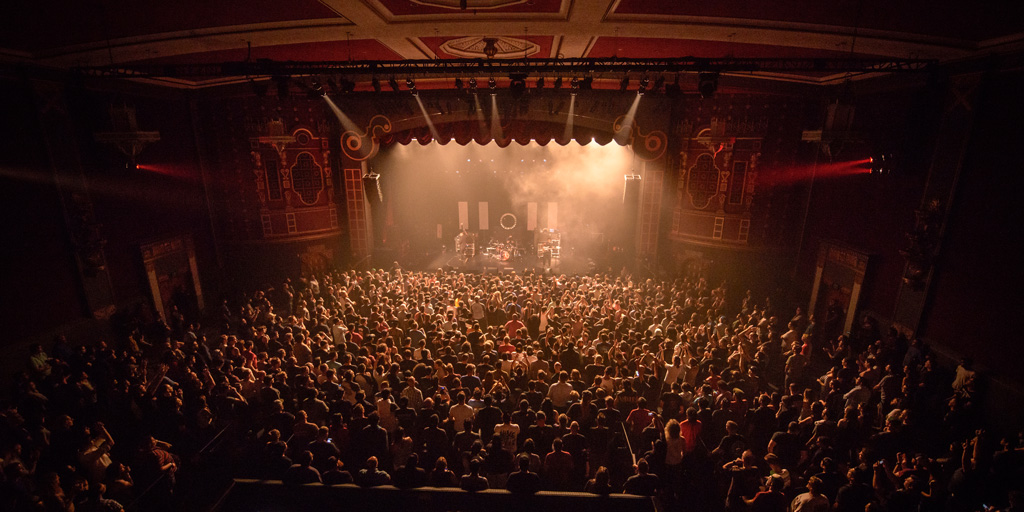 The Used played the first show of a two night date at The Observatory in North Park, Friday August 19th. The band played the full tracklist from their self-titled, debut album, making for a vibrant and nostalgically uplifting performance.

Celebrating fifteen years as a band, The Used are on tour playing their first two albums in each city. Before the show, bassist Jeph Howard said about the tour, “We wanted to celebrate the records and the time–the era– and go back to our roots.” And fans came out to celebrate with the band; before the concert started, the line to get in was around the block. The teens and pre-teens who maybe wore too much black, or had dark bangs of hair over one eye (possibly a little too long to see a reasonable distance) are adults now, but not too old to relive their youth.

In a way, reliving youth was a theme of the whole performance. Lead singer Bert McCracken urged after the first song, “I want you to forget about how cool you think you are and be a child once again!” The crowd responded and the energy throughout the entire show was infectious. Fans crowd surfed, moshed, jumped, and swayed on the slower songs, and The Used fed off the energy. McCracken, as the lead singer, knew which parts, of which songs the crowd wanted to sing along to. The recorded version of “The Taste of Ink” is produced so the vocals sound echoey; as the crowd sang the choruses with McCracken, it made the performance sound exactly like the album, on a huge and immersive scale. McCracken also displayed surprising vocal range. During “On My Own”–a shorter, ballad like song– McCracken let out a raspy, yet somehow melodic, pain-filled cry that quieted the venue.

McCracken inserted intimacy into the performance as well. Between songs he would share personal anecdotes about his sobriety; or how he wrote the song “Poetic Tragedy” about deceased Blind Melon singer Shannon Hoon; at one point he even brought a seven-year-old girl onstage to sing “Blue and Yellow” with him, claiming beforehand that she is, “the future of this world.”

All of this might have come off as preachy or self-indulgent, but didn’t because the crowd cheered the little girl and cheered  for his sobriety. . .and also because McCracken would undercut the seriousness by saying things like, “I fucking love guacamole!” or doing an interlude of “The Fresh Prince of Bel Air” theme song (seriously).

“Emo” is a label that is often associated with The Used. Howard renounced this, commenting that all music should have emotion in it. He said, “To say that your music isn’t emotional, is to say that it’s not music.” It is easy to think that, with songs titled “Buried Myself Alive” and “A Box of Sharp Objects”, the music would create a melancholy event. While it’s true that some of the songs are about sad things, the music isn’t about being sad. The music is about overcoming sad times; a message which has resonated with fans for over fifteen years.