New York, New York, I love you! I know that last time I was ranting about how I left Chicago to start a new life in San Diego, but I would move to the East Coast in a New York Minute.

I have never been to such a fast-paced city with so much passion and excitement. Now, before I go off tangent on how much I loved the New York, NY, the Big Apple, Times Square and all those other goodies, I would like to talk about my trip from the beginning.

Approximately 16 of us arrived at the JFK airport after an exhausting morning flight. Some of the fellow travelers had been to the city before, but I would be losing my New York virginity. By the time we got our luggage, we were eager to finally head to our hotel. Unsurprisingly, I somehow managed to lose all 15 other travelers and ended up wandering the subway for an hour. Mind you, I had never been there before, I had no cell phone service, and I wasn’t wearing my glasses/contacts so I was off to a teriffic start. After a few deep breaths, I figured out where I was going and fortunately met up with the rest of the group at our hotel.

I lived in an atrocious, filthy, and cockroach infested apartment this past summer (that is another seed to tell), but this seedy New York hotel was just as bad.

As soon as my three other roommates and I stepped onto our floor, we knew this was going to be awful. The outside of the room doors looked like coffins, so we knew we were entering death. There was mold covering the heater, and the bathroom looked like it was straight out of a horror movie.

One morning I showered so I could refresh after a long night out. I was relaxing and laying down on the bed when I saw something move out of the corner of my eye. I looked up, and what do I see, a RAT!!! This wasn’t a cute Ratatouille situation (even though the rat might have been looking for one); this was a very big problem in my eyes. Frantically, I called the front desk and they let us move up two floors to another room that wasn’t too spectacular either. The appliances didn’t seem to work in this one, but at least it was rat free to my knowledge. Out of my entire time of being in the city and on the subway, the only rat I saw just so happened to be in my room! Needless to say, not a lot of time was spent in that ratty hotel.

Later I ventured out to Central Park with one of my roommates to escape the the rat drama.

We were so shocked as to how elegant and captivating a piece of land in the middle of a major city could be. It had snowed the night before, so it looked like it would be in a Hallmark Movie scene. It was pretty cold, but I kind of missed the brisk air in a nostalgic way. Oddly enough, it was refreshing to be bundled up in three puffy jackets. In the park there is a John Lennon memorial. As an overall big Beatles fan, I was overjoyed to be there (I might have shed a tear or two).

I did a ton of exploring in the city and began to feel a bit like Carrie Bradshaw, but only now can I see why she would love the men there. They all seem driven, and honestly their were some of the most attractive men I’ve ever seen (I really dig a man in an Italian suit). The only thing I didn’t care for was the cost of everything. I might have spent a remarkable amount of money on drinks, and my bank account surely suffered, but I had the time of my life so who can really complain.

There are not enough words to explain how marvelous New York was. I loved it because of the liveliness and motivation the city seemed to breathe; overall, the atmosphere was very energetic and the people seemed to be incredibly hard working. Here, I don’t think anyone could ever be bored, for there is always something to see or somewhere to go. It was bright, it was loud, it was New York City. Like Frank Sinatra, I want to wake up in a city that never sleeps.

Sunflower Seeds is a bi-weekly series where I detail my transition from mid-western Chicago over to Southern California. The initial move led me to bloom.

2 degrees to 92 degrees. I’m talking about the magnificent city of Chicago. I’m a 20-year-old curious girl who picked a school 2,000 miles away from my beloved home. Chicago, Illinois had been all I knew for 18 years, but I desperately needed change. I couldn’t take the negative 11 degrees anymore, and quite frankly I was just bored with the whole Midwest thing. I needed to bloom! I wanted exhilaration, for California is the land of hopes and dreams after all. Now don’t get me wrong, I was scared out of my damn mind, but I’d like to think I’m making something notable of myself.

When I first came to San Diego I literally felt culture shock. I wasn’t necessarily home sick, but everything here was so unfamiliar. It blew my mind how people dressed since it’s pretty much 70 degrees year-round, everyone and their mother seems to have a tattoo, and I had no clue what the word açaí even meant. San Diegans seemed to be so liberated compared to sedulous Chicagoans; they did what they wanted when they wanted. I’m not saying this is good or bad, but it was a lot to digest at once.

San Diego has a life of it’s own. That’s why I chose to start the next chapter of my life here. Moving to San Diego has taught me so much about myself – it’s weird to look at old photos and see the type of person I was just a moment ago. I do miss Chicago at times, for it will be one of the best cities you’ve ever bean to, but I’m very satisfied with where I am at today. I took on many challenges and struggled a tremendous amount with school/figuring out what my soul purpose is, but I am happily solving these mysteries one sunset at a time.

If you’re still reading this, you have probably noticed that this blog is called Sunflower Seeds. I named it this with the help of a great friend of mine who is actually a Chicagoan too, so shout out to you Kyle for experiencing these odd but exciting years with me at SDSU. The sunflower thing came up because I like to live my life freely, for sunflowers are the freest and happiest flowers of them all. I plan to give my insight on being a city girl in a beach town on a wide range of affairs that you hopefully find alluring. I hope you all continue to follow my thrilling escapades with me, for I shall see you next seed. 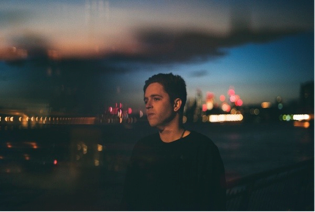 The Soda Bar is an up-close and personal music venue in San Diego, known to host many talented artists. Benjamin Francis Leftwich recently stopped by while on tour for his second album, “After the Rain,” before heading back to London. I had the opportunity to talk to him before the show, which I, unfortunately, was not able to attend because of age restrictions. But, Leftwich assured me that he tried his hardest to get me in. What a sweetheart!

Because this was his last show in the states, we talked about him exploring San Diego. Sadly, he had to head straight to the airport after the show. The traveling and long car rides never stop! Although, he did make it clear how humbled and fortunate he felt about being able to tour with this album.

To kick off the interview, we talked about his most recent album, “After the Rain.” Leftwich commented that the songs on this album are very much “straight to the point and clear and objective,” when compared to the music on his first album, “Last Smoke Before the Snowstorm.” Leftwich said, “This is the most honest music I’ve ever written.”

I asked if the theme of this album revolved around new beginnings, or was inspired by the recent passing of his father. Leftwich then explained that everyone has their own interpretation of his music and it’s meaning, which he encourages and appreciates.

“Music has always been a part of my life,” Leftwich said.

Throughout it all, from playing guitar and piano with his family, to forming a band with friends as a teen, to his current journey on the road, he’s made it a priority to keep family close. Leftwich spoke highly of his sister, the person he tries to talk to the most while on the road. “Music, and family, most importantly, bring me the most joy in life. I [owe] everything to that,” he stressed.

I asked Benjamin how he felt when listening to live music or his favorite artists. He told me that he grew up with the Beatles, The Rolling Stones, and Bruce Springsteen. Now, he listens to Chance the Rapper, Drake, and Frank Ocean. He maintained that it’s important to him to let those various and diverse inspirations show in his work. He added, “Sometimes I need them to get out of my own head.”

Leftwich stated that he does not get nervous before playing. He focuses on connecting with the audience. He wants his songs to be felt.

As our conversation wound down, Leftwich gave some last minute advice to anyone pursuing music as a career. He suggested, “[Don’t] be afraid to take risks. You need to be open-minded in the industry because like many have said before me, it’s not always easy.” He also encouraged people to be true to themselves. Great advice.

I personally want to thank Benajamin Francis Leftwich for the interview. Hopefully, there will be another one soon.