On November 17, American Pop Rock Band The Wrecks came to San Diego’s House of Blues on Thursday to perform one of their last remaining shows for their long awaited tour, “Back and Better Than Ever”. With Indie Pop band Arlie opening with an amazing set, featuring hit songs, “didya think” and “big fat mouth,” the crowd was immersed and ready to hear more from the energetic band. Arlie frontman Nathaniel Banks delivered incredible vocals while his bandmates danced and elevated the crowd with their contagious energy.

There were groups of dedicated Arlie fans scattered in the crowd screaming along to the lyrics of their songs. Those who didn’t quite know the songs were still bobbing their heads along to the music. Banks even brought out a saxophone in which he performed a chilling yet immersive solo throughout the song “crashing down”. I had never heard Arlie before the show and my favorite song from their set ended up being “water damage” off of their EP “Wait”. I was thoroughly impressed with everything about this band and their attitudes. They are definitely worth a listen.

Carrying the same attitudes to amp up the crowd, The Wrecks opened their set right off the bat with “Out Of Style”. While drummer Billy Nally electrified the crowd smashing on the drums, singer Nick Anderson jumped around stage while giving his all with his voice. Everyone was smiling and having a good time, band and audience.

Immediately starting off the set with their popular and earliest songs, “Panic Vertigo” and “James Dean,” it allowed the crowd to quickly connect with the band as everyone knew the words. Performing songs off of their most recent album “Sonder,” The Wrecks brought their pop roots to life.

Although the songs on their new album are a little bit softer than the ones off of their debut album “Infinitely Ordinary”, the music doesn’t fall far behind their staple rock sound. At one point, the band grabbed props and costume decor from voluntary fans and performed while looking festive, and what a sight it was to see. Nick Anderson interacts with the crowd so well and it is easy to tell that the band appreciates their fans. I loved the show and hope to see them again in the future with new music.

See what she did “October 13th, at 10:15.” Stopping in San Diego for her tour “emails i can’t send,” Sabrina Carpenter kicks off her show with opener “girlhouse”.

Sabrina Carpenter started off as an actor best known for her break-out role on Girl Meets World, but she has shifted to musical pursuits. From the release of her first album “Eyes Wide Open,” Sabrina Carpenter has added a total of six different albums under her expansive discography. With her most recent release, “emails i can’t send” has become the star of this tour. The stage is set with her band and a custom drum set with her initials “SC” in gold cursive as a red illuminated heart takes center stage alongside Carpenter. Carpenter opens an unforgettable night on the piano at the Observatory, North Park. Fans pull out their phones and burst into screams as they sing along to her hit tracks. Moving from a slow-paced song of heartbreak, to a viciously upbeat set, Sabrina Carpenter moves swiftly from performing songs from her newest album to “Can’t Blame a Girl for Trying,” which stems way back to her first album, released in 2015.

Sabrina Carpenter has extremely dedicated fans as some camped out over nineteen hours to catch a glimpse of the songstress. Each fan was seen passionately screaming her lyrics for the entirety

of the setlists, while others danced with friends and fellow fans. To feed the dedication, Carpenter had a segment in the midst of her show dedicated to fan interactions, hoping to give them advice on hardships and heartbreaks that she has experienced. Following her brief dedication to her fans, Carpenter shifted to performing a cover of Madonna’s famous single, “Like a Virgin”.

Additionally, she performed another top streaming song “Nonsense” of her newest album. Adding additional ending lyrics that pertain to each city as the song winds down, Carpenter improves adding, “You’re face alone could get me preggo, Millie Bobby Brown leggo my eggo, I’m in motherf***ing San Diego” at the end of her track “Nonsense”. Fans are sent into a spiral of screams in response to Carpenters’ freestyle.

Sabrina Carpenter wraps up the night with “Fast Times,” alongside thank you’s to her fans and crew.

The crowd refuses to disperse as Sabrina Carpenter calls her show to a close. Fans persistently call for Carpenter to return to stand for an encore of her hits “decode” and “because i liked a boy”. Sabrina Carpenter returns, performing an encore that sends fans into a frenzy, and red heart-shaped balloons descend from the roof and blanket the crowd below.

Growing up as a fan of Sabrina Carpenter’s music and shows, being able to see her perform in person was an entirely different experience. Definitely, nostalgic. Her stage presence radiated throughout each fan in attendance at North Park. I am genuinely grateful for the experience to attend and photograph the “emails i can’t send” tour on behalf of KCR.

Over the weekend I had the pleasure of seeing “Celebrating Billy Joel” at the Magnolia in El Cajon. A cover band for one of the most iconic songwriters/rockstars of the last decade, the band did an amazing job of encapsulating his timeless songs. They had the audience, including myself and my sister, singing along the entire time, leaving my voice strained by the end of it.

Speaking of the audience, I was probably one of the youngest people there. If you think I’m lying just look at the picture above and notice all the gray hair I captured from my pre-show picture. I have been a Billy Joel fan for many years and I absolutely loved the show. I can’t imagine what the old-timers thought as they have most likely been listening to Billy for years. While the audience was on the older side, the band themselves were surprisingly young.

Led by lead singers Rob Stringer and Alex Dee who hail from England, they lit up the stage. Not only could the duo make you think you were actually at a Billy Joel concert, they surprised me every few songs by playing a different instrument that they had yet to play yet. Alex started off the concert singing “Everybody Loves You Now”. His booming voice filled the room and left me with goosebumps. He played piano as he sang and got the crown invested immediately. Rob took over next singing and playing piano for “I’m Moving Out”. The change in singers was surprising and awesome all at once.

The two were great, bouncing off of each other the whole show. At one point they changed positions mid-song. Alex and Rob switched singing/piano positions as they sang “Scenes from an Italian Restaurant”.

I have been to multiple Billy Joel concerts and what I love most about them besides the singing is the amazing bands Billy has joined. Alex and Rob had just that with a group from Charlotte, NC. The saxophone player stood out to me most. Rhi Dewey played tenor, alto, and soprano sax, and she tore it up with every single one. She had a solo during “New York State of Mind” that blew me away. I used to play saxophone and hearing her play made me wish I stuck with it. She was the highlight of the show for me.

Overall this was such an amazing concert and a phenomenal atmosphere. The band made it seem like a true Billy Joel show singing some of his greatest hits and killing all of them! They gave us an encore of “Uptown Girl” and “Piano Man” that ended the show perfectly.

If you ever have a chance to listen to Billy Joel music… do it! 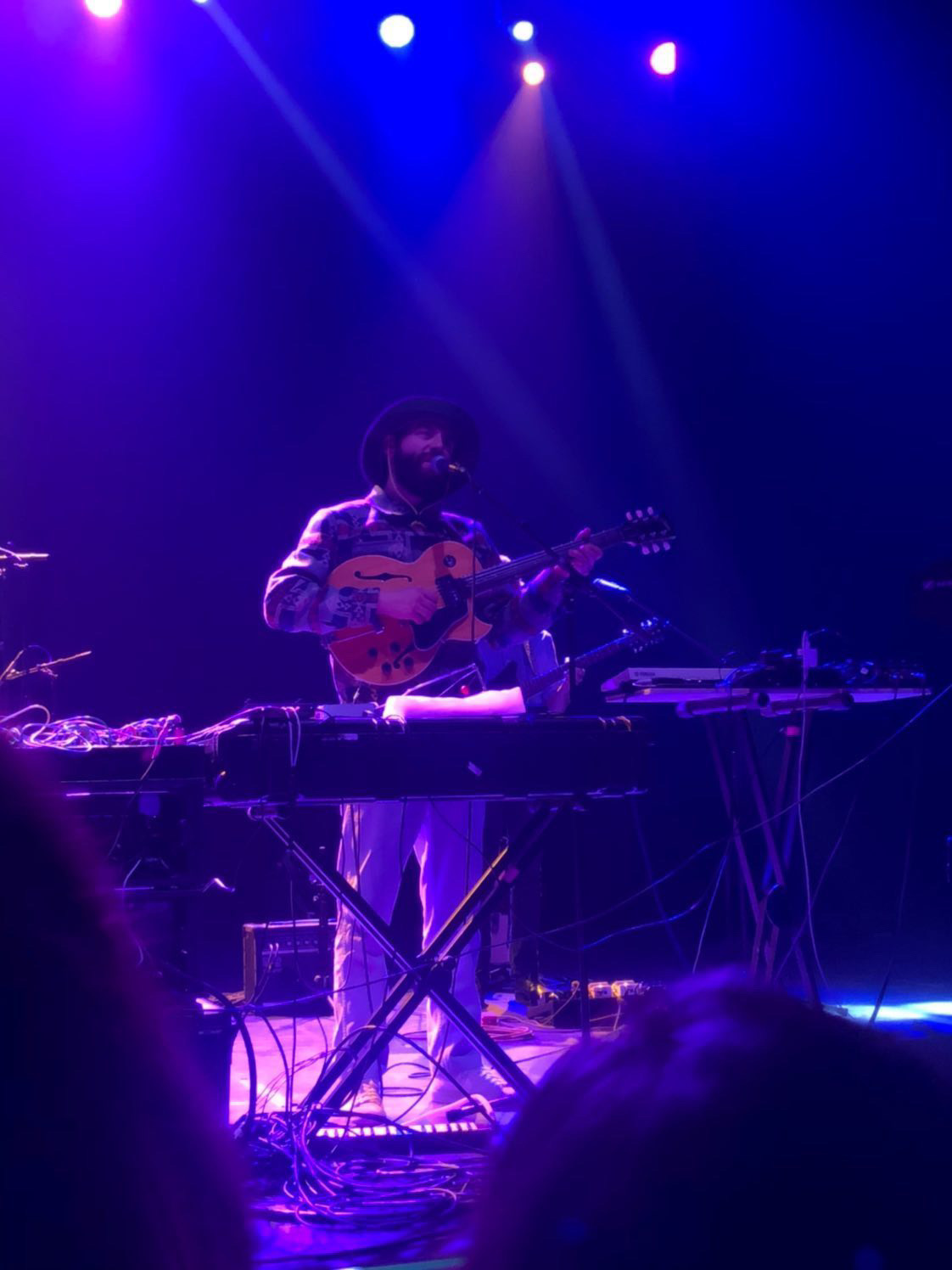