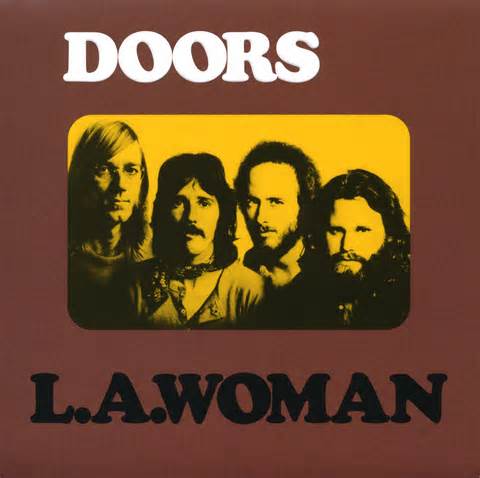 For this first blog post we will be going back to unearth the famous album L.A. Woman by The Doors. The sixth and final Doors album with lead singer Jim Morrison, L.A. Woman is considered one of the bands’ masterpieces. It is a fabulous array of blues rock from one of the seminal psychedelic bands of the late 1960’s. Released in April of 1971, the album was recorded under tense conditions by the band, who were attempting to spurn the notoriety that Morrison had attracted which had landed him in jail in several states.

Immediately evident is the distinct lack of all dark psychedelia that The Doors built their careers on. L.A. Woman would pick up where their previous album, Morrison Hotel, left off. A drive deeper and deeper into blues rock. All while incorporating Jim Morrison’s unique and thought provoking poetry. The album features two additional musicians to the band members themselves: bassist Jerry Scheff who was Elvis Presley’s own bassist, and guitarist Marc Benno to play rhythm, this allowed Doors guitarist Robby Krieger to play lead guitar lines and solo without overdubbing in the studio.

L.A. Woman begins with some driving funky blues of courtesy of The Changeling. Drummer John Densmore plays sharp and tight while Ray Manzarek’s super-funk organ and Scheff’s bass set the tone in this rollicking tune.

Following The Changeling is Love Her Madly, one of the more popular radio songs the band wrote, featuring Manzarek’s signature flair on the keyboard that was the musical lynchpin of the group.

Up next is Been Down So Long, a swaggering and dirty blues-rock song oriented around Krieger and Benno’s guitar play. Morrison sounds so at home in his blues man persona; the days of Break On Through and Light My Fire from their first album The Doors sound from a completely different time and place. In the tours before the recording L.A. Woman, Manzarek would join Krieger on guitar because there are no keyboards on the track.

If Been Down So Long is The Doors playing blues-rock at its best then Cars Hiss By My Window is The Doors playing straight up blues at its best. Listen closely for an eerie second vocal track by Jim Morrison hidden in the mix. Another fun open secret about this song is the ‘guitar solo’ is actually sung by Morrison to mimic a soulful blues six string performance (whether or not you find it convincing is up to you.)

The rather abrupt end of Cars Hiss By My Window brings us to the title track: L.A. Woman is perhaps the best song The Doors wrote in their blues phase and one of the crowning achievements of the band. Evoking dark, mysterious images and murky tones that place the listener into the world of an LA night. The American fascination with the underside city of Los Angeles is fleshed out and embodied by this track; equal parts wonder, mystery, and danger. L.A. Woman is the longest song on the album, clocking in at 7 minutes and 49 seconds, so each band member gets his chance to properly stretch his legs with some fantastic improvisation. The song builds up from a bluesy interlude into a furious finale through the chorus. A seminal moment of the recording career of The Doors can be heard when Robby Krieger is striking the guitar chords after Morrsion sings “city at night” backed with the textural piano playing of Ray Manzarek and John Densmore laying down a pounding beat. We conclude the first side of the album with Jim Morrison yelling “L.A. Woman” as the music fades out.

Beginning the second side of the album is a truly deep and dark piece of music called L’America. The sinister opening of creepy noises begins the journey into a different sort of city, one with none of the wonder but all the darkness conveyed in L.A. Woman. Densmore’s half-military style drumming moves along the track and features Ray Manzarek back on his electric organ, something more akin to the earlier work of the band.

Speaking of the earlier work of The Doors, the elegant and sad Hyacinth House sounds similar to works like The Crystal Ship off the The Doors’ first album. Hyacinth House shows off beautiful organ sweeps by Ray Manzarek, some of the finest work of his illustrious career. Jim Morrison tells a sorrowful tale of loneliness that many critics thought of as a reflection of his own feelings in the months leading up to his death.

Next up is Crawling King Snake, one of the bluesier songs on the album after Been Down So Long and Cars Hiss Past My Window. An old blues piece The Doors is breathing life into with their own special style. Robby Krieger is at home on his slide guitar and gives the song the mystique of the dirty southern bayous that generated the blues itself.

A bit more of a Doors version of the blues can be found on the following track: The WASP (Texas Radio and the Big Beat). It’s blues but with a Doors psychedelic twist. Just like the song itself suggests, the back beat is in charge and drives the song along. Manzarek’s funky organ plays along with Kriger and Densmore, all playing loose at times but coming together for those moments that show you just why The Doors were one of the best bands the United States ever produced.

Finishing off the B-side is the other centerpiece on the album aside from the title track itself. Riders On the Storm begins with the sound of thunder and rain, leading us through a murky and dark journey to conclude the album. Each band member gets in on the action, Krieger solos with underrated feeling and precision on guitar, Ray Manzarek’s electric piano washes over like the storm itself. Scheff’s bass and Densmore’s drums are sharp but understated, perfect for evolving the atmosphere the track. Underneath Morrison’s evocative vocals is another ghost-like, whispering voice that follow his vocal track like an echo of the thunder. Aside from L.A. Woman the song, Riders on the Storm is one of the most well known and popular songs The Doors wrote. The sound of rain fades out, ending the album. For listeners everywhere it would be the last of Jim Morrison any of them would ever hear, the singer died a bit under three months after the release of the album.

If you listen to the 40th edition of the album, slightly different mixes of songs can be heard. Along with that two extra tracks:You Need Meat (Don’t Go No Further) is a bluesy romp sung by Ray Manzarek, and Orange County Suite is a sorrowful song recorded by Morrison alone on the piano and given sparse back instrumentation by his band mates after his death. It was likely written for his girlfriend Pamela Courson.

L.A. Woman is one of the best albums to come out of the fall of the counterculture movement in the late sixties. Most people in that generation were extolling the happiness and freedom a life of love and drugs could bring. The Doors were a band of that exciting time set apart by their propensity to explore the darker elements of the summer of love. It is the final album by The Doors with Jim Morrison, widely regarded as one of the most popular rock icons of his generation and a national poet for the counterculture movement. The album is certified double platinum in the United States. Give it a listen if you have 40 minutes to spare.