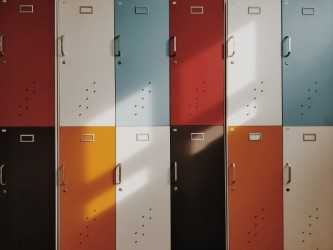 New York, New York, I love you! I know that last time I was ranting about how I left Chicago to start a new life in San Diego, but I would move to the East Coast in a New York Minute.

I have never been to such a fast-paced city with so much passion and excitement. Now, before I go off tangent on how much I loved the New York, NY, the Big Apple, Times Square and all those other goodies, I would like to talk about my trip from the beginning.

Approximately 16 of us arrived at the JFK airport after an exhausting morning flight. Some of the fellow travelers had been to the city before, but I would be losing my New York virginity. By the time we got our luggage, we were eager to finally head to our hotel. Unsurprisingly, I somehow managed to lose all 15 other travelers and ended up wandering the subway for an hour. Mind you, I had never been there before, I had no cell phone service, and I wasn’t wearing my glasses/contacts so I was off to a teriffic start. After a few deep breaths, I figured out where I was going and fortunately met up with the rest of the group at our hotel.

I lived in an atrocious, filthy, and cockroach infested apartment this past summer (that is another seed to tell), but this seedy New York hotel was just as bad.

As soon as my three other roommates and I stepped onto our floor, we knew this was going to be awful. The outside of the room doors looked like coffins, so we knew we were entering death. There was mold covering the heater, and the bathroom looked like it was straight out of a horror movie.

One morning I showered so I could refresh after a long night out. I was relaxing and laying down on the bed when I saw something move out of the corner of my eye. I looked up, and what do I see, a RAT!!! This wasn’t a cute Ratatouille situation (even though the rat might have been looking for one); this was a very big problem in my eyes. Frantically, I called the front desk and they let us move up two floors to another room that wasn’t too spectacular either. The appliances didn’t seem to work in this one, but at least it was rat free to my knowledge. Out of my entire time of being in the city and on the subway, the only rat I saw just so happened to be in my room! Needless to say, not a lot of time was spent in that ratty hotel.

Later I ventured out to Central Park with one of my roommates to escape the the rat drama.

We were so shocked as to how elegant and captivating a piece of land in the middle of a major city could be. It had snowed the night before, so it looked like it would be in a Hallmark Movie scene. It was pretty cold, but I kind of missed the brisk air in a nostalgic way. Oddly enough, it was refreshing to be bundled up in three puffy jackets. In the park there is a John Lennon memorial. As an overall big Beatles fan, I was overjoyed to be there (I might have shed a tear or two).

I did a ton of exploring in the city and began to feel a bit like Carrie Bradshaw, but only now can I see why she would love the men there. They all seem driven, and honestly their were some of the most attractive men I’ve ever seen (I really dig a man in an Italian suit). The only thing I didn’t care for was the cost of everything. I might have spent a remarkable amount of money on drinks, and my bank account surely suffered, but I had the time of my life so who can really complain.

There are not enough words to explain how marvelous New York was. I loved it because of the liveliness and motivation the city seemed to breathe; overall, the atmosphere was very energetic and the people seemed to be incredibly hard working. Here, I don’t think anyone could ever be bored, for there is always something to see or somewhere to go. It was bright, it was loud, it was New York City. Like Frank Sinatra, I want to wake up in a city that never sleeps.