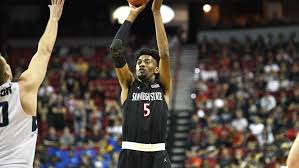 This is the 30th game of the season for SDSU and will feature a senior night farewell to stars such as Jeremy Hemsley, Devin Watson, and Michael Sohikish. The Aztecs have won 9 out of their last 11 games and will battle Fresno for the 3 seed at the Mountain West Championship hosted in Las Vegas. With a win against Fresno, the Aztecs would go undefeated at home in conference play for the second time in 20 years. Although the Aztecs will receive an automatic bid at the conference tournament, the question remains whether they will make the March Madness bid?

SDSU has appeared in 14 NCAA tournaments in school history and they have a chance to make the 68 team bracket in a couple weeks. However, Utah State or the University of Nevada will probably receive the automatic bid to March Madness. Though SDSU is the reigning conference champion, Utah and Nevada have both won at least 6 more games than SDSU in the 2018-19 season.

32 teams receive an automatic bid to March Madness based on their conference championship, 36 receive an at-large bid, and 4 play for the 16th seed in Ohio during the First Four tournament.

It is going to be awfully close in terms of whether or not SDSU will make the bracket. I project them to be “on the bubble” and finish the season with a 20-11 record, beating Fresno at home and losing to #17 Nevada on the road. That kind of a record will float them just around a .650% winning percentage for the season, which is NCAA March Madness material.

First, they have to beat Fresno at home and give Nevada a run for their money. Look for 2-time MW player of the week Jalen McDaniels to help aid them in that journey as he is averaging 16.4 points per game this season. Strength of schedule will play a factor in the NCAA’s evaluation tool for determining the 38 teams. I believe that beating Nevada in a stunning fashion on February 20th at Viejas Arena, and playing them on the road to end the season will boost SDSU’s chances of making the tournament.