I started playing with makeup when I was four-years-old. I would sneak into my mother’s bathroom and smear my face with lipstick and pat eyeshadow onto my cheeks because I thought makeup would make me as beautiful as my favorite Disney princesses. Since then, my longing for beauty has grown into my love for artistic expression.

For a long time, makeup has been a tool to shame women. Makeup has been used to make women seem unintelligent and shallow as if we care about nothing else besides our appearance. Men have made jokes about taking women swimming on the first date to see if we are attractive or not without makeup. Women even get shamed by other women who base their personality off of how they are “not like other girls.”

Some people do wear makeup to hide their insecurities, and maybe we do need to talk about why we feel like we need to look attractive at all times, but many of us genuinely enjoy wearing makeup. Why do we feel the need to shame women for doing what they enjoy? Why is anything associated with femininity taken as a joke? Some people, especially men who are attracted to us, love to tell us that we look better without makeup as if that is a compliment, but it is actually degrading and frankly many of us do not care to hear it.

Art is for Everyone

Makeup isn’t reserved for people who identify as a woman. As seen by YouTube’s (chaotic) beauty community, makeup can be enjoyed by anyone. Men, or people who appear to look more masculine, are often shamed for wearing makeup as well. When men wear makeup they are often insulted and told that they appear too feminine as if that is a bad thing. If art is neither reserved for men or women, then the line should not be drawn at makeup. Promoting the idea that makeup isn’t tied to gender can help young girls, boys, and everyone else explore their artistic abilities without fearing judgment.

My favorite makeup artist is not anyone I’ve seen on YouTube, but someone who I’ve known for her entire life, my sixteen-year-old cousin Halle. Halle dreams of going to cosmetology school and becoming a makeup artist for actors, and I absolutely believe that she is capable of fulfilling that dream. When Halle does makeup, she doesn’t simply do typical everyday looks, she makes her face look so unique that it looks like a painting that belongs in a museum. She pays close attention to the colors she chooses and all her looks require such intricacy that many of us (including myself) do not have the patience or the talent to do.

When I look at Halle, I wonder how anyone could not understand that makeup is a serious art form. I was never very artistic growing up, but knowing Halle has caused me to bring out my creative side and try bold makeup looks that make people stare. Next time someone has something negative to say about wearing makeup, remember that you are an artist and not everyone appreciates art. 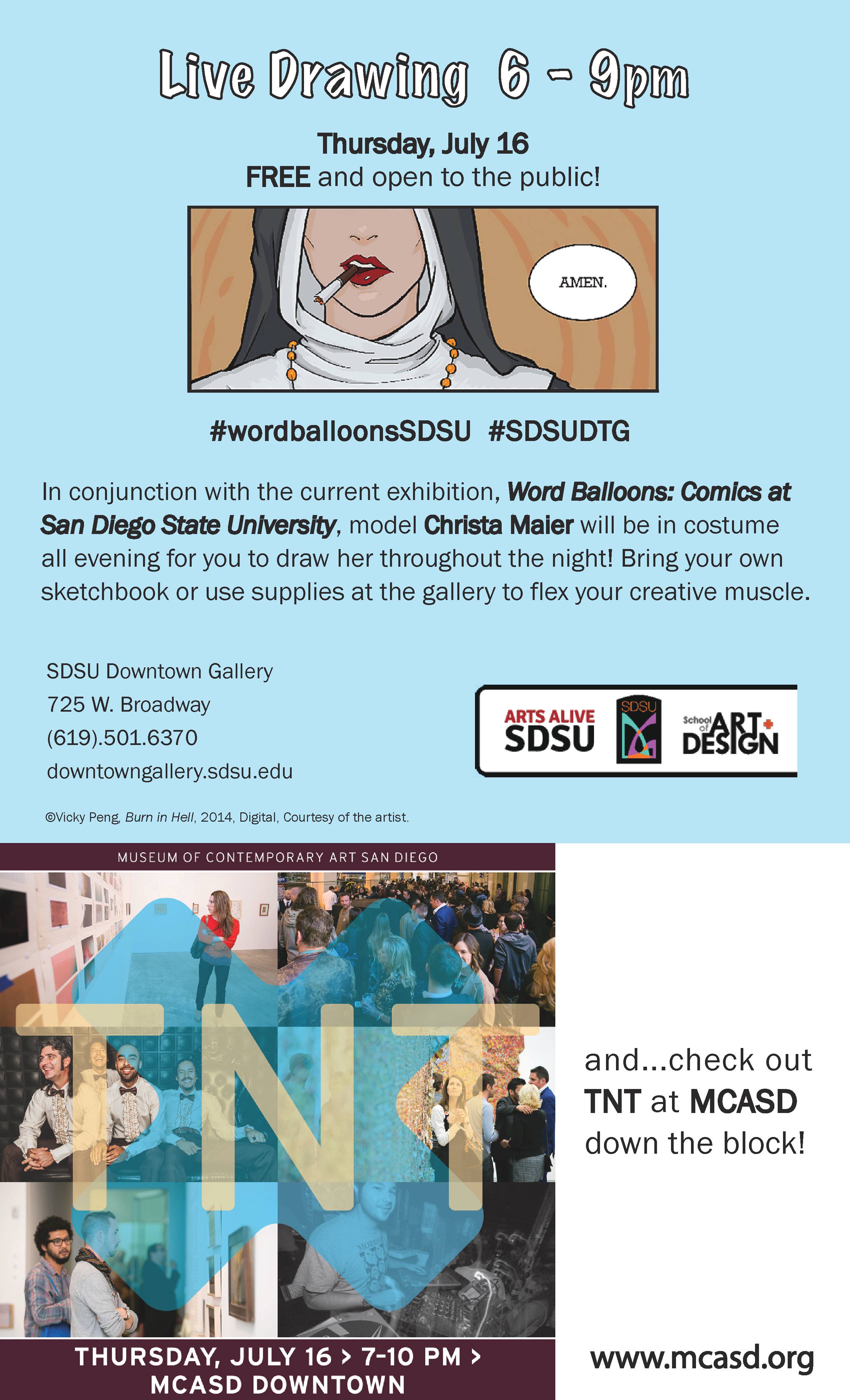 Looking for something cool to do this Thursday?  Well look no further, because KCR’s got you covered!

This Thursday, July 16th, there are two pretty awesome events happening for all you art enthusiasts. The Museum of Contemporary Art San Diego is holding a Thursday Night Thing event from 7PM-10PM. The new exhibition, open for the public on Thursday, is composed of three different projects exploring the geography and cultural history of the region. The projects featured are those of Anya Gallacio , Byron Kim, and Jock Reynolds & Suzanne Helmuth, which could be explored with the help of the MCASD Gallery Educators in the guided tours provided for guests attending. Other activities also include a 3D printing demonstration with Fab Lab San Diego and making black-on-black paintings inspired by the work of Byron Kim, who is among the three projects being shown at the MCASD.

At 7:30PM, the party kicks off with some live music provided by Kyle-m with an all vinyl DJ set, who is then followed by band Chicano Batman at 9PM. Dance the night away, enjoy some drinks at the bar, or snack on some food truck treats. Whatever you do, you’re going to be doing it to some sweet sounds.

This event is free for Members (who will also receive their choice between a free cocktail or beer), $8 for students and seniors, and $10 for non-members.

Tickets to this TNT event can be purchased here, but if you want to keep coming back for more TNT events, become a member! Being a member costs $5 a month, which gets you free admission to every TNT and a free cocktail/beer every event. Now isn’t that a steal? Take advantage of this deal and join today!

Right across from the MCASD, the SDSU Downtown Gallery is holding a live drawing event from 6PM-9PM that Thursday as well! Model Christa Maier will be in costume for you to draw her throughout the night, so swing by with your sketchpads and get to drawing! Materials such as drawing boards, sketchpads, and pencils will be provided if you’re running low on supplies. No worries, we’ve got you covered!

Make your Thursday night special by submerging yourself in the San Diego art scene! You’re sure to have a blast.