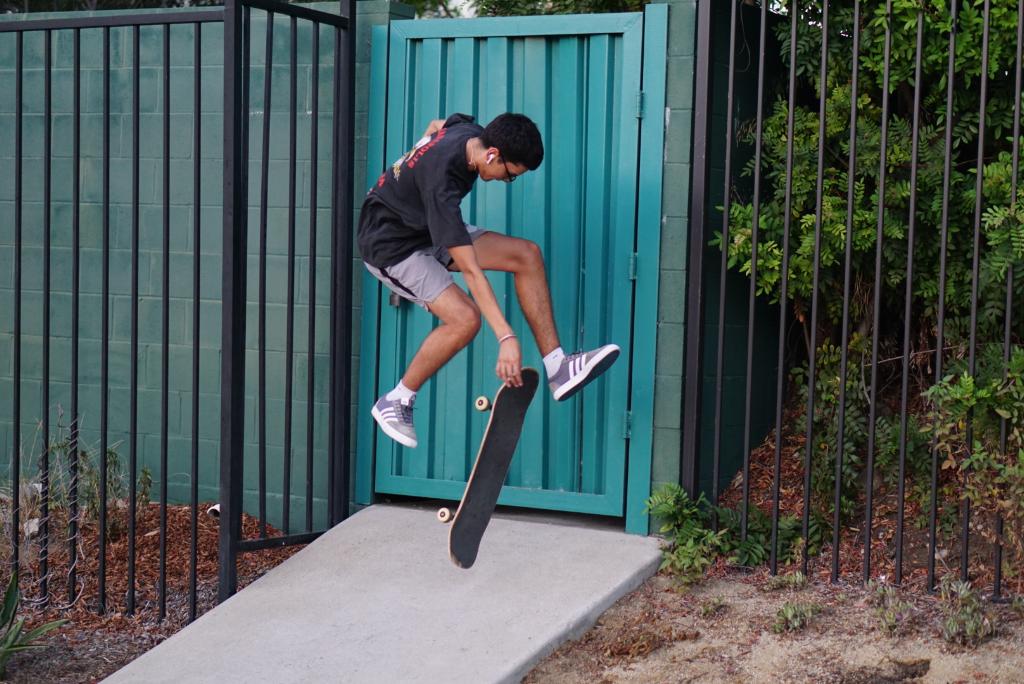 The skateboarding community has been notoriously associated with the concept of gatekeeping since skate culture became mainstream.

I mean, wear a Thrasher shirt as a non-skater and suddenly you’ve got an army of beanie-ridden, board-strapped teenage boys chasing you down as they yell “POSER!!” at you in perfect unison. That may sound a little far-fetched, but believe me: skaters are brutal. While films like Mid90s depict the best aspects of skateboarding (community values, personal growth, and an escape from the harshness of home life), they also give a taste of the worst. While the negatives (excluding drug and alcohol abuse) are depicted in a lighthearted, juvenile manner, the use of derogatory language heavily present in the film and skateboarding community–especially skateparks– unintentionally alienates and excludes individuals from the LGBTQ+ community from feeling comfortable, safe, and happy in a space designed to bring like-minded individuals together. Although I don’t skate myself, I see this toxic behavior prevalent in the skating community as I have many friends with personal experiences relating to the topic. To get a deeper insight, I spoke with my friend, Aidan Skillingstad, a fellow freshman at SDSU who is quite familiar with the toxicity found in the skateboarding community.

1. How long have you been skating and what brought you to start?

“I’ve been skating on and off since I was in the second grade when I lived in Las Vegas because I have an older brother who had a lot of friends who skated, so whenever my brother and I would hang out, he would always be skating. This eventually led to me getting my own skateboard. I ended up taking a break from it for a couple of years but I went back to it towards the end of middle school ‘cause I moved to a new place and didn’t have a lot of friends, so skating helped me make a friend group and break out of being alone. Despite making friends, I just like the activity in itself. Like landing a new trick is a very fulfilling feeling.”

2. Do you prefer skating alone or in groups?

“When I was younger I would skate primarily with my brother, just because I didn’t know how to skate so he would be the one teaching me stuff. But in middle school and high school, I preferred skating with people, specifically my close-knit friend group of skaters. And now, I just prefer skating alone–it’s more of an anxiety thing. Like being in a new place and meeting skaters is kind of scary because you don’t know if they’re gonna be better or worse than you or judge you.”

“The first time I went to a skate park was in Las Vegas–my brother would get dropped off at the skatepark on the weekends, so we would just be there all day skating, but I was a kid so I didn’t really care if I was getting in the way or skating poorly. I was just following my brother around, tagging along for fun. But to older skaters, I was kind of annoying as I would just skate around without paying attention to other people.”

4. When did you first realize that gatekeeping existed in the community?

“So the first time I actually was aware of it was probably like middle school when I started getting back into it. I had a little bit of experience, but I was not good. I still couldn’t do much on the board, and none of my friends could either. We were all getting into it together, so there wasn’t any judgment between any of us because we were all trying to push each other to be better. But then we would be skating around town with a big group and come across a group of older skaters, ones that were a lot better. Even though we were really trying to give it our best, to them it seemed like we were just doing it to be cool. Over the years that feeling was just terrible, so that’s why now I prefer skating alone just because I just don’t like putting myself in that kind of situation. But it’s something that I like. I just don’t know why I should feel like I’m judged for that. It shouldn’t matter how good I am, just that I enjoy it.”

5. Have you had a personal experience with this?

“Well for me, I push mongo which is not the way you’re supposed to push on a skateboard. So there’s stances and the way you do a trick–you can be regular or goofy–then there’s the way that you actually push the board. This is something that causes a lot of judgment, so if you push regular that’s normal (left foot on the board, right foot pushing). But I push the opposite, which kind of looks stupid, especially when you’re losing your balance you do this weird kind of step thing which is a little embarrassing. If you push mongo, there’s this underlying judgment from other skaters, like you’re not really considered cool or whatever. So that was something that even now I try to avoid by practicing pushing regular. It goes back to the whole anxiety thing, which again is why I prefer skating alone nowadays.”

6. Would you say that the whole gatekeeping concept (existing in both skateboarding itself and within the culture as a whole) creates a toxic atmosphere which prevents people from getting into skating?

“I kind of feel conflicted about it because from one perspective, I don’t like the gatekeeping in skateboarding and I don’t like that people judge you for the brands you wear or the skateboard you have, but also at the same time as a skateboarder, I kind of have this tendency to gatekeep myself–it’s my first response when talking about skating that it’s my thing and that other people don’t appreciate it as much as I do.”

7. Has the toxicity in the community affected you personally?

“So even from a young age I knew that I was different in terms of who I was attracted to but I definitely tried to suppress the feelings or thoughts, so when I would go skate with my brother and his friends as a young kid hearing ‘g*y” and “f****t’ being used in derogatory ways by older teens made me feel like it wasn’t okay to be who I was. Likewise, skating with peers my age in middle and high school who also used this type of language on a regular basis did not help with self-identity. I was more open to who I actually was, but despite that, it was hard to be totally accepting of myself when my friends might not even be accepting of me.”

I’m going to be honest — prior to interviewing my good friend Aidan, I hadn’t even factored the LGBTQ+ community into the equation. I went in expecting just to discuss the common exclusionary, juvenile behavior of teens and left with a new perspective into how these harsh words and practices ostracize an entire group of individuals just looking for an escape themselves.

The use of negative language about LGBTQ+ individuals is especially harsh for teenagers to hear as they are in the midst of exploring their individuality, sexuality, and sense of self. This can be extremely confusing and frustrating for them, as the language denotes a lack of openness and acceptance in the community preventing them from feeling as if they can be themselves amongst people who share the same passion–skating. It frustrates me to know this. But Aidan recognizes that is just a factor of the culture–the harshness is just a phase every skater must endure before fully feeling apart of the community, almost like being hazed before being initiated into a fraternity. But if you skate, be mindful of what you say and recognize when others are spewing derogatory terms into the wind. It may just be “apart of the culture” and just another form of “locker room talk”, but words are powerful; let’s make the skating community more inclusive so that more individuals can appreciate the satisfaction of finally landing that first ollie.