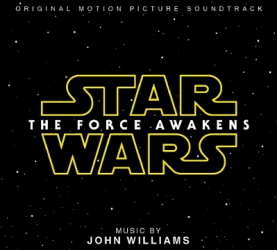 Happy 12 days until Star Wars: The Force Awakens is released in theaters! In celebration, this post will combine two of the very best things: music and Sci-Fi.

With all the debate about whether or not the seventh installment in the Star Wars films will live up to the hype, there is one aspect that no one need worry about: the soundtrack. Arguably the most famous and talented composer in history, the five-time Academy Award winning John Williams  has once again created and conducted the film’s original score.

The trailers have featured snippets of William’s  work, but the majority has been kept under  wraps.The soundtrack shares the December 18th release date of its film partner.

Whether infuriated or appreciative for the lack of musical spoilers, anxious fans can preorder the cd or the digital copy now but will have to wait until then to listen. For those more interested in vinyl, as of yet there is no specified date for a vinyl version to be released, but Walt Disney Records has promised an early 2016 vinyl release.

Also to be released in early 2016 are Star Wars collectible editions of William’s previous works. So here’s a little inspiration for your Christmas wish list to Santa: Star Wars: the Ultimate Vinyl Collection will include the soundtracks of all six previously released films with their original artwork on the sleeves. This beautiful display can be yours all for the very not low price of $199.99.

Star Wars: the Ultimate Soundtrack Collection will include 10 CDs of the soundtracks and audio interviews with Williams and Harrison Ford. The package will also include a poster, stickers and an hour long DVD entitled Star Wars: A Musical Journey. The third to be released is Star Wars: The Ultimate Digital Collection, a bundle of all six movie soundtracks as high-def downloads.

To celebrate the new era of Star Wars, these special editions will be available come January 8, 2016.

The booming Imperial March or foot-tapping Cantina Song are nearly impossible to separate from their accompanying movies. The signature orchestral sound are as much a part of the movies as R2D2 or C3PO.

Come December 18 the world will experience not only a brand new Star Wars movie with brand new characters, but also a brand motion picture soundtrack.

Here’s to hoping the movie and the music are all fans have dreamt them to be.

Be sure to find out yourself. Buy your movie tickets, pre-order the album, and of course… May the force be with you.