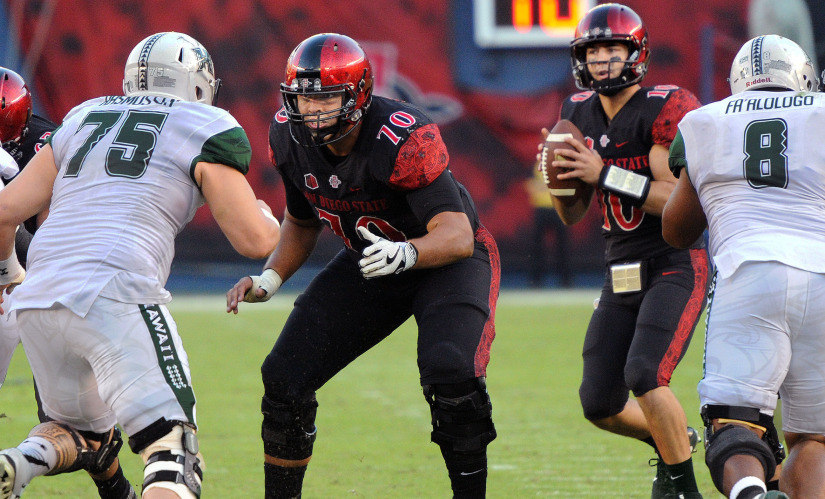 With San Diego State football still riding the momentum of their 55-0 victory over the University of Hawaii in Week 10, SDSU head coach Rocky Long and his band of brothers will hit the road to take on the University of Nevada, Reno in hopes of continuing their 16-game winning streak in the Mountain West conference.

Coming off a 35-26 loss to the University of New Mexico, Nevada is entering the contest hungry for a bounce back win.

Against UNM, the Wolf Pack got caught with their tail between their legs, as their sophomore quarterback Tyler Gangi completed just 55.8 percent of his passes and threw two costly interceptions, one of which coming in the final two minutes of the game.

Gangi and his teammates will look to have a better outing against the roaring Aztecs on Saturday, but with SDSU in the midst of a roll, Nevada might be better off just getting out of the way.

The Aztecs pride themselves on defense, and despite constant changes in the starting lineup, their spear has remained sharp.

“We want to stay high in the (defensive) rankings and play the defense that we should play,” Phillips said.

Freshman cornerback Ron Smith earned his first career start for SDSU against Hawaii and made the most of it, as he hauled in his first career interception and took it for six points early in the first quarter.

On a similar note, SDSU’s senior cornerback Damontae Kazee has led his teammates in the secondary to new heights, following Smith’s lead against Hawaii with two interceptions and a touchdown. Kazee now owns the Aztecs’ record for most career interceptions (15).

Look for the Kazee and company to continue their defensive success against Nevada.

Pumphrey to Pound the Rock

If you haven’t heard about the 5’9”, 170-pound running back for the Aztecs by now, I think it’s time you do your research.

SDSU senior ball carrier Donnel Pumphrey is fifth all time in rushing yards (5,853) and just 173 yards away from passing former Memphis back DeAngelo Williams for the fourth spot on that list. His consistency remains unmatched.

Long assured the media in a press conference during the week that Pumphrey earn the opportunity to break the record.

“He’ll get enough touches over the next four or five weeks so that he can break an all-time record,” Long said.

With junior running back Rashaad Penny and freshman running back Juwan Washington adding to the Aztecs’ total on the ground, SDSU’s rushing attack averages 273.89 yards per game.

“Our coaches all tell us that we need to be the toughest team on the field and even when they stack the box against us, we still have pride in our running game,” junior tight end David Wells said. “No matter if they put eight, nine of 10 guys in the box, we want to run it down their throats. I have faith that he can take advantage of the holes that we make for him. If we just give him a slight crease, he’s gone. We’ve all seen that before. We need to keep holding our blocks and he can bust one any time.”

Pumphrey is an amazing player, but he can’t carry the load by himself.

SDSU quarterback Christian Chapman and their offensive line will play key roles in opening up running lanes for Pumphrey and company.

The Aztecs’ Unsung Heroes on Offense

Because Pumphrey has pulled a majority of the national spotlight with his record setting play this season, other Aztecs have thrived in his shadow.

Junior wide receiver Quest Truxton is one of many having success in the dark.

Truxton has turned his opportunities as a punt returner into added snaps on the offensive side of the ball, as he has successfully mirrored his production on special teams at wide receiver.

“I think this happens in programs when you are given chances,” Long said when asked of Truxton’s efforts this season. “There are programs in this country where if you aren’t a 4 or 5-star recruit, you don’t get a chance in the game. Obviously we are not in that situation. Everybody in our program, whether you are on scholarship or not, gets the opportunity to prove that they can play and contribute or that they can’t play. We took him because of what we saw on film. He was a pretty good wide receiver and he did a good job of returning punts. He had a little learning curve where he struggled early on, but he’s turned out to be a very good player and he’s getting better as he goes.”

Truxton has touchdowns in back-to-back games for the Aztecs and will look to continue that streak against Nevada.

Like Truxton, Wells has expanded his role significantly, as the Clovis, California native has developed into a viable receiving threat for Chapman out of the play action without taking steps back as a blocker.

The Aztecs are going to come into this matchup looking to get started early on defense, leaning on guys like Phillips and Kazee to force Gangi out of his comfort zone.

With Gangi likely running for his life, Nevada will turn to their lead back James Butler to get their offense going on the ground, but the Aztecs’ second ranked rushing defense won’t stand for that.

Offensively, expect Pumphrey and Chapman to have a field day against Nevada’s defensive unit. Even if the Wolf Pack targets Pumphrey early, Wells and Truxton should bail Chapman and the SDSU offense out of any trouble.

If the Wolf Pack wants to turn this affair into a dogfight, they must prevent Pumphrey from running wild. However, Nevada’s 127th ranked run defense couldn’t keep a kitten in its cage, let alone a lion like Pumphrey.