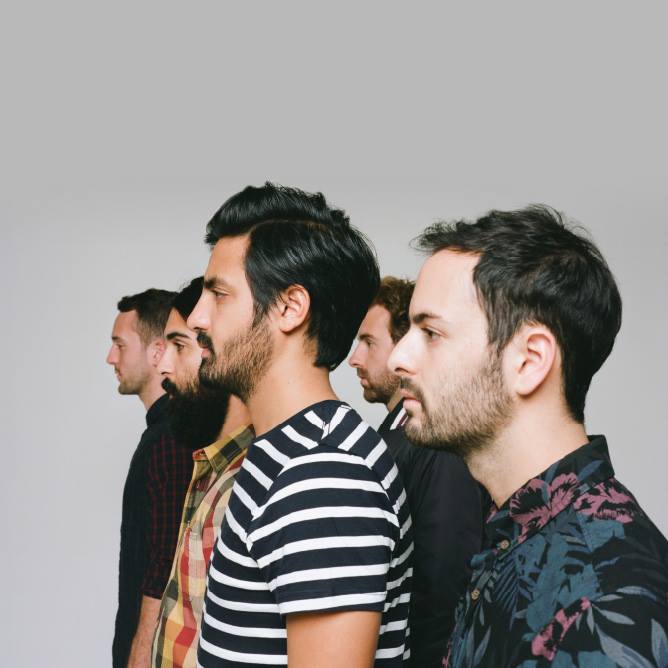 While waking up for my Tuesday 8:00 a.m. class today I was hit with a reminder that we are in the middle of the semester.  Nights are a little bit longer in the library; mornings are cold and come too soon; and midterms are creeping up faster than finals.  All of this can only mean one thing – we need to take some time for ourselves and our wild sides.  We need good music for our souls, and I know just the band. This week I am featuring a band that is playing two nights in San Diego this week – YES, TWO NIGHTS THIS WEEK! So between all the page flipping and essay cramming, we can definitely take a break – in the name of rock ‘n roll of course.

Young the Giant is an alternative, indie rock band formed in Irvine, CA back in 2004.  Before they decided on their current name they were formerly known as The Jakes back in the day. The band consists of: Sameer Gadhia on lead vocals, Jacob Tilley and Eric Cannata on guitar, Payam Doostzadeh on the bass, and lastly Francois Comtois on drums.  Together they have released three albums titled Young the Giant (2010), Mind Over Matter (2014), and Home of the Strange (2016).  In 2011 the band’s two singles “Cough Syrup” and “My Body” hit charts both reaching to the top five of America’s top alternative music. My personal favorite song is “Cough Syrup”  because when I first heard this five years ago, it was a sound that I was not familiar with.  They are happy and poppy without sounding like a cookie cutout of Top 40 pop.  Their lyrics are different yet meaningful.  For example, my favorite lines are:

“If I could find a way to see this straight
I’d run away
To some fortune that I, I should have found by now”

Two months ago Young the Giant released their latest album Home of the Strange on August 12th and have since been on tour selling out almost every single venue.  You guys can check them out tonight, October 18th, and tomorrow, October 19th, at the House of Blues downtown at 7:00 o’clock.  Tickets are sold out – but you are more than welcomed to stand on the corner and try to scalp some tickets with me tomorrow night.  Until then be sure to check out their Facebook page in order to stay up to date with tours, news, and all that jazz.