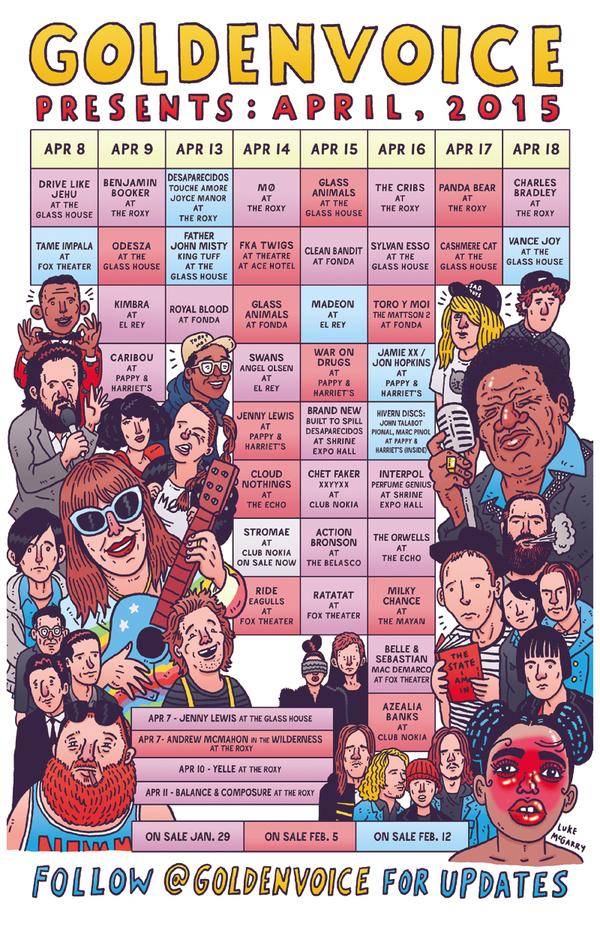 With scorching weather and festival season approaching, each weekend in San Diego is becoming a tease of summertime. This is part of the blessing that is living in Southern California along with having live shows and entertainment available in most cities. After the first annual KABOO Music + Arts Festival announcement, I was inspired to put together a small list of upcoming and musically colorful events happening both in and around the San Diego county.

On Saturday, March 28, SDIF promotes the independently-described power of diverse and underdog forms of art that includes music, business, films, comedy, etc. The lineup consists of various genres that shift from reggae to alternative pop and rock to hip hop. Open to all ages, this event is posted in City Heights Urban Village. This two-day festival filled with heavy rock/alternative bands set on this years’ lineup grows more popular each year. Held this month at the Observatory in Santa Ana, anything goes at Burgerama. With garage-rock from FIDLAR and classically known Weezer carrying this year’s title, it is destined to carry out its musically carefree and thrilling reputation. If you are 21+ and festival savvy, CRSSD fest invites electronic artists (like Lido) and alternative-rock bands (like STRFKR) along with other genres of dance music to their stages. Held in SD, this festival attracts our generation of with a handful of DJ sets and upbeat trance-styled artists. Mostly (though not entirely) held around the LA county, Goldenvoice handles its annual mini-coachella by taking countless performances staged in Indio this year and dispersing them in venues throughout SoCal. Basically, if the Coachella lineup was either dissatisfying, unattainable, or too pricey for your liking – there is still hope. Various artists featured on Coachella’s 2015 lineup are visiting venues such as the Glass House and Fox Theater this April. If festival-esque events are not your thing, Bandsintown is how I know if anyone I listen to is on tour and coming near me (including festivals in my area). Its best feature? Searching your Spotify, last.fm, or Soundcloud library to give you updates based on your personal taste. With all these options, you are bound to find a way to cash out on live music this year. Life is more fun when you have a concert to look forward to.