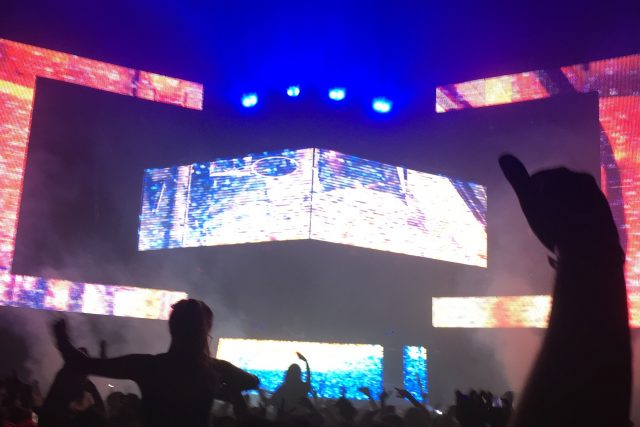 Strobe lights flash at you from every angle, bass pounds from the speakers through your body and soul, people are trading everything from bracelets to Snapchats to hugs, and you’re listening to your favorite artists while everyone around you has the biggest smile on their face – this is the epitome of your typical rave.

Specifically, this scenario describes my time at LED Anniversary, which I attended on Sunday, February 18, 2018. Decked out in a colorful bodysuit, fishnets and stacks on stacks of “kandi” bracelets, I walked through the doors of Valley View Casino Center with my two best friends by my side. This wasn’t my first rodeo, though. I’ve been going to raves and festivals for about two years now. While other veteran ravers can claim years and years of shows under their belt, I guess you could say I’m fairly new to the rave scene. However, I’ve been to enough events to know the ropes of rave and festival culture.

I was excited to introduce my friends to the rave lifestyle, and I knew they were counting down the days until LED Anniversary came around; but once we got there, we all knew our lives were about to change. Granted, LED events aren’t the biggest and best shows in EDM, but they’re still a fun and local way to rave.

This year’s lineup featured famous names in the EDM industry such as French DJ Madeon, house devotee Malaa, headbanging Herobust and Swedish bass-house band Brohug. Getter, Medasin and Rickyxsan were also there showcasing their musical talents. I had seen Madeon and Malaa three times before, so I knew what to expect from their sets.

Madeon had added some new tracks in since the last time I had seen him – at Escape: Psycho Circus around Halloween. He opened with a remix of his and Porter Robinson’s famous song “Shelter,” and the crowd went wild as the song built up momentum. I actually FaceTimed my other friend (who’s literally the biggest Madeon fan ever) during most of the show, and we built off each other’s energy, her wishing she was there with me and not stuck at school in Alabama. Hugo (Madeon’s actual name) definitely threw down and I can’t wait to see him at his next performance.

Other crowd favorites throughout the night included Getter and Malaa. I felt bad for Getter as the sound equipment failed not once, but twice, during his set; it definitely was a vibe-killer, but I continued to scream that I loved Getter and his infamous bulldog Budders whenever the crowd went silent. Malaa lit up the room later in the night with some solid house music and had everyone on their feet dancing and shuffling.

Herobust closed the night going hard with fiery and energetic dubstep tracks. By this time, my friends and I had made our way up to the very front, and we joined the line of headbangers breaking their necks at the rail. We danced without a care in the world all the way until 4 a.m., even though we still had school the next day as SDSU does not call off classes on President’s Day (*sigh*).

My third LED event was definitely one for the books. I think I’ve also successfully turned my friends into ravers as they’re dying to attend my next event, Beyond Wonderland, with me in March. Now we’ve just got to make it through the next month of school!

Hannah Roberts is a public relations major in the Weber Honors College at San Diego State University. She is a born and raised San Diegan who thrives at the beach and anywhere sunny. After she graduates in May 2019, she hopes to work for a PR or marketing firm in a major city.