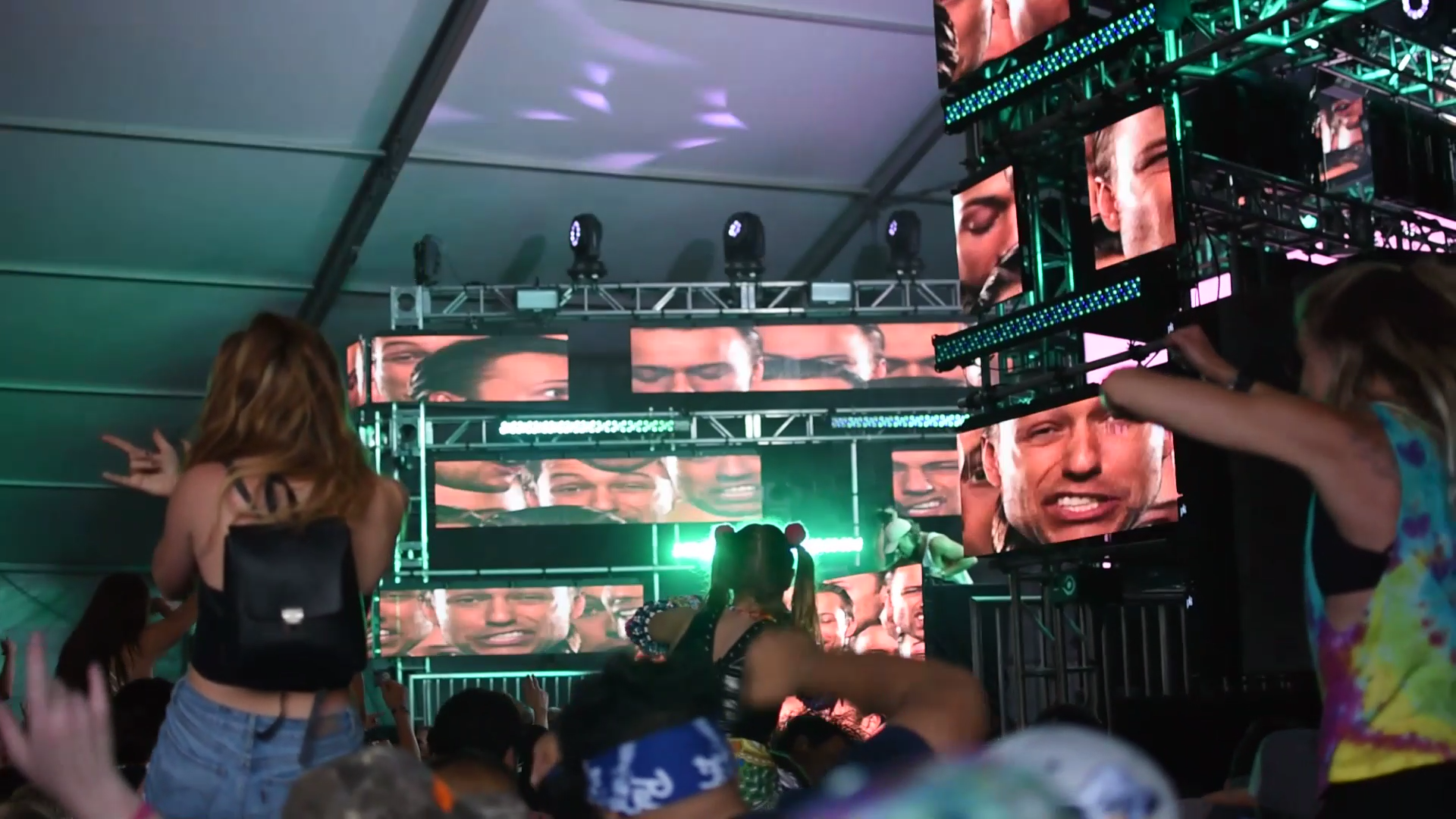 On June 25, the second day of the ID10T Festival at Shoreline Amphitheater, I sat down to talk to the EDM artist Party Favor about his fans, touring and of course, music.

KCR: First of all, congratulations on a great set tonight!

KCR: So, you went on tour last year and you’re playing quite a few dates this summer. How’s that been going?

PF: It’s been amazing.  I had my first Friday off last weekend and it felt great.  [Touring] is awesome. I’ve been doing this for a long time and as a musician, in any genre, you can only hope to tour a lot – but it’s definitely very taxing on you.  For shows like this though, where I can come up here (I live in LA) – the Bay is so close and they always show me so much love.  I’m very happy to be here.

KCR: What’s your favorite place that you’ve visited so far?  I saw that you’ve been all over the world recently.

PF:  Yes, oh man, I’d say Myanmar was really cool.  It was a country that was extremely closed-off. Until about five years ago, they hadn’t opened their borders. They didn’t have internet.  It was so neat to be there, and all these kids knew all the words to the songs [I mixed] and to my songs. There was so much energy I couldn’t believe it.  They had been in the dark for so long and they caught up so quickly. And it was a really cool country too.

KCR: Do you have any good tour stories from when you were abroad?

PF: Tour stories from when I was abroad?

KCR: Or just in general.

PF: I have other tour stories.  I don’t know if they’re appropriate for radio (laughs), but abroad was pretty cool.  In Japan, I was out in the Shibuya area, which is a huge shopping area.  So, I was out there walking around and I had three different people, all separate, come and find me on the street in this huge area where there’s hundreds-of-thousands of people walking around, because of my Snapchats.  Some girl brought me a picture she had painted of me. So it’s just really neat. I would never have thought that in some other country halfway around the world someone would have painted my likeness, and taken their own time to do that.  It’s humbling. But, it’s also super weird.  I’m like “wow” – I don’t know how to handle it.

KCR: So you went to Chapman–

PF: I do. I mean, when I first started I was hands-on with my videos. I was like a video Nazi. I would want it just like this. I would edit my own videos and things like that. But, over time, I’ve released control and let other people edit. When I was first getting started in music I started by sampling [music] kind of similar to how I would edit a film. So, it was a nice transition even though I had never had a musical background. It worked out. It was meant to be.

KCR: And now your songs are getting in commercials and stuff too.

KCR: You also listen to a lot of different genres – from when you were growing up to now. Do you incorporate those into your music?

PF:  I try to. I think that if [the many genres] don’t necessarily come through in my music, they come through in my sets.  I try to always be super diverse in what I play.  And I always try to respond to where I’m at – you know – If I’m in the Bay I always play some Thizz music. I think for me, I just like anything that makes me feel good.  So, it doesn’t matter what genre – if it’s rap, if it’s metal, if it’s Cali dub – I just like to make people feel good. If my music can do that, then I’ve done my job.

KCR: Speaking of genres, on your Facebook page it says “no genre.”  Do you wanna talk a little about that philosophy?

PF: My management’s fired, they messed up (laughs). No, you know, I think in this day and age, at least for me, to say “oh I’m this,” [would be pointless], because I don’t like being labeled and I don’t think a lot of people do. There’s so much you can do with music and for me, with “dance music,” you’re not necessarily rock and roll, you’re not blues, you can do so much. I can play dubstep, I can play deep house, I can play whatever, or make that if I want to. Having no genre enables me to be anything.

KCR: Do you have any upcoming plans for an album after putting out the EP that you did?  Or maybe another EP?

PF: I would love to, and I’ve talked with my management about doing another one this fall.  I’ve definitely got material. But I think in this day and age it’s so hard to do EPs, especially albums, because people’s focus is on one song and that’s it.  With streaming, the good thing is that you have access to a million songs, but unfortunately artists can work 7,8 months, sometimes a year, on an album and then people hear your stuff and two weeks later they go “Where’s your new stuff? Where’s your new song?” So it’s easier to put all your focus and energy into a single and say “Hey, focus on this, this is my new song, let’s put all our energy into this.” I’ll play new music at my shows but keep the focus on one thing.

KCR: Who are you listening to right now?  What’s on your playlist?

PF: I’m listening to the new 2Chainz album, it’s awesome. “Pretty Girls Love Trap Music” is what it’s called.  Seems to be the case (laughs). I was just listening to AC/DC on the plane here, and that always gets me fired up.  So a little bit of everything.  I’ve definitely been listening to a lot of hip hop, but I love classic rock so I’ll always put that on.

KCR:  Who would you like to collaborate with in the future?

PF:  Oh man.  I don’t know.  Rick Rubin, he’s a producer from the stars.  He’s a hit-maker.  Or maybe Max Martin from Sweden.  But I’m not really a popstar so I don’t know if that’ll happen.  Unless I take a pop career.  I’ll be the new Jonas Brother or something.

KCR: That could be your genre.

PF: Shout-out to San Diego, I love you.  Coming back soon to Bassmnt, let’s get sweaty.

Make sure to see him on Saturday, July 23, at Bassmnt. Get your tickets here.