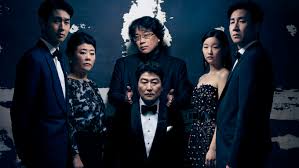 Highlight of The Oscars: Award winning Film: Parasite. We explore its triumph Worldwide and What it Means For Film

Four time Oscar winning movie, Parasite, makes Oscar and world history as the first foreign film to ever win Best Picture in 92 years of the Academy Awards. For those who have not seen Parasite,the movie tells the story of the poor, hard on their luck Kim family. They work together to infiltrate the wealthy Park family, scamming their way into various assistant jobs that lack the qualifications for. Parasiteshows just how far the Kim family will go to experience the same wealth as the Park family. Director Bong Joon Ho vividly expresses the devastating class and wealth gap in South Korea, while also displaying how this wealth disparity affects almost every country around the world.

Along with winning four out of its six nominations at the Academy Awards – Best Picture, Best Director, Best International Feature Film, and Best Original Screenplay – Parasitetook home two awards at the Critics’ Choice Movie Awards for Best Director and Best Foreign Language Film. These are just additions to its long list of accomplishments, including its nomination for three Golden Globes, including Best Director and Best Screenplay, and receiving the award for Best Foreign Language Film. The film’s cast was responsible for some of the movie’s awards and nominations, as it took home the award for Outstanding Performance by an Ensemble at the Screen Actors Guild Awards. These, along with many other awards, such as Best Director and Best Feature Film, easily make Parasiteone of the most successful movies of the year.

Adding on to its bountiful success throughout awards season, Parasite was also extremely successful in the box office, making $35 million in America and $165 million internationally (Clark). During its debut in the United States, the film earned $376,264 and was playing in 1,060 movie theaters; it is now projected to spread to over 2,000 theaters following its success at the Oscars. It has made over $1 million in countries such as Australia, Brazil, France, Germany, Italy, Mexico, Spain, and many others, asserting its dominance worldwide.

The Significance of Parasite’s Success

Besides Parasite’s overwhelmingly good feedback in the box office, its love by critics, and success with movie-goers worldwide, its triumph surpasses its status as an international blockbuster. The Oscar’s first Best Picture win as a foreign language film, the true impact of Parasite’ssuccess is monumental.

Many believe that this win will open doors for many other international filmmakers, such as Bong Joon Ho. Like the Parasite director said during his Oscar Speech, “Once you overcome the one inch tall barrier of subtitles, you will be introduced to so many more amazing films.” The normalization of foreign language films is amazing for the cinema industry because it expands the opportunity for inclusivity and supports the push for diversity. Each year the Academy attempts to be more diverse, despite their lack of people of color nominations this year (and most years), and no female nominees for the Best Director category. They have more recently doubled their membership to include 35% of people from foreign countries, and the voting panel now has doubled from 8% people of color in 2015 to 16% in 2020. Despite the Academy’s painfully slow progress towards diversity, Parasite’s enormous success worldwide, and specifically at the Oscars, has given hope to many directors, actors, and international film counterparts that film is made for them too.