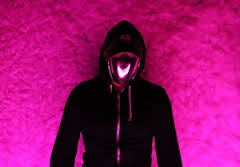 “Ugh, what is this?” That’s the typical response that I get when I play Tobacco’s music for anyone who hasn’t heard it before. It’s an understandable reaction. I can’t say I liked Tobacco’s music much myself the first time I heard it. This is due to the fact that his music is just as odd and alienating as his public persona, deliberately disturbing and often uninviting. However, I’ve never been one to back down from a musical challenge.

Recording his albums on hissing old cassette tapes (yes, really) and distorting his voice into an otherworldly pitch through a vocoder, Tobacco’s sound is fully intended to mess with your brain. He is the ultimate example of an experimental artist: a guy with no traditional musical abilities who is still able to realize his vision through the use of unorthodox tools and innovative recording techniques. Tobacco’s musical spectrum is distinctly divided into two projects: Black Moth Super Rainbow (which features added instrumentation from other members) and his solo work. BMSR showcases Tobacco’s lighter side, with most of the material staying melodic and carrying a sunshiny vibe. It’s still tinged with his trademark blackness but this is dark in the way that a children’s fairy tale is dark; you’re lost in the beauty of an enchanted forest made of bubblegum only to realize later that it’s populated by cannibalistic witches. I think this is a good way to sum up the mood of BMSR’s music.

His solo material sheds any pretense of light and goes for full-on assault. Tobacco albums are much heavier and abrasive sounding than BMSR and more electronic in composition. It could be said that BMSR is his “pop” side and Tobacco is his “dark” side. But considering how dark and tripped-out his “pop” music is, most people can’t even begin to imagine how insane his solo records sound.

Some people have a clear preference between the two projects but I don’t. I find them both to be brilliant and incredibly distinct depending on my mood. If I’m in a more relaxed and happy mood, especially on a sunny day, BMSR is the go-to. If I’m feeling more energetic or just in the mood to have my face melted off, any of his solo records work perfectly. The two projects complement and enhance each other overall, like a schizophrenic mind divided into two personalities that are natural opposites, combining to create something greater than the sum of its parts. His vision peaked last year with his third solo album, Ultima II Massage, one of the craziest head-trips that I’ve ever had the pleasure of being immersed in. Showcasing more diversity and production skill than any of his previous work, this was a close second behind Flying Lotus’ You’re Dead! as my favorite album of 2014. Loaded with classics from top to bottom, Ultima II Massage is his most challenging album to date, yet unquestionably represents the ultimate Tobacco experience.

So if you’re brave enough, strap on some headphones and journey inside the haunted asylum of inter-dimensional terrors that is Tobacco’s mind. It can be an uncomfortable or even downright disturbing place to be at times, but it’s never less than a riveting experience.