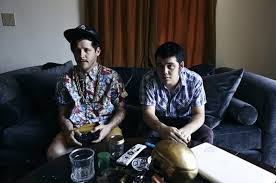 Sweet Valley is a totally off-the-rails instrumental beat project created by Kynan Williams and his brother Nathan (known for fronting the surf punk band Wavves). The duo create densely layered collages comprised almost entirely of samples. From video game sound effects to dialogue from movies to just about any style of music imaginable, there’s nothing they won’t sample. Due to the overwhelming amount of sampling in their music, legally clearing all of them would be impossible so all Sweet Valley mix tapes are available for free listening through their Bandcamp website.

The brothers started the project in 2012 with a trio of mix tapes. Stay Calm is a fun and energetic debut establishing the only trademark of the Sweet Valley sound: complete insanity. The one thing you can always be sure of with a Sweet Valley tape is that what you’re hearing will change constantly and keep surprising you. Their second mix tape, Eternal Champ, remains their most enduring and impressive. With its impeccable flow, hypnotic rhythms, and ingenious sampling, Eternal Champ is a chill-out classic. They rounded out the year with Jenova, proving that the previous mix tapes would not define their sound. Jenova is less hooky and immediate than its predecessors, but repeated listenings reveal hidden layers. While it was originally my least favorite of their projects, I’ve grown to like it almost as much as Eternal Champ.

Their rate of output has slowed a little since that first year, but they’ve still put out at least one project every year. In 2013, it was SV, their longest mix tape to date at 41 minutes. Featuring a more electronic and upbeat sound, this marked a departure for Sweet Valley from making beats best for sitting around and hanging out to making beats ready for the dance floor. This trend has continued since. 2014 saw the release of two more mix tapes, So Serene and F.A.N.G. The first and better of the two, So Serene is a single track running approximately 28 minutes in length. Featuring arguably their best production to date, this ranks with their best and trippiest work. F.A.N.G. doesn’t quite reach the same heights, but is still extremely enjoyable in its own right. With its brief runtime and seemingly unplanned creation/release, it feels more like a bonus than a proper mix tape. However, it’s another one that has grown on me more and more and a reminder that any new Sweet Valley project will be an interesting experience of some sort.

I will be looking forward to their next release whenever it arrives. The duo are still very little-known due to it being a side project and not being able to sell most of their music due to the sampling. So if you have somewhat eclectic taste in music, check out their website and throw on a mix tape. And no matter which one you choose, let yourself go and make sure to enjoy your stay in Sweet Valley.