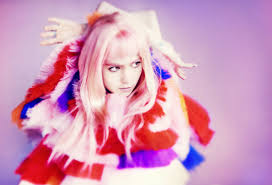 A common criticism of experimental music is that it’s difficult to listen to and lacks catchy hooks. While this is often true, it is possible for music to be experimental and pop-influenced at the same time. Canadian singer/songwriter Claire Boucher, better known by her stage name Grimes, is a perfect example. If anyone asks me who is the most “accessible” of my favorite artists, she’s my standard reply.

That doesn’t mean her music is any less experimental than the other artists I listen to. Like everyone else I’ve written about, she has developed a singular sound that takes influences from multiple styles of music and combines it into something that’s unmistakably her own. However, being a female singer and taking influence from pop stars such as Madonna gives her music a much less alienating sound than a lot of what I listen to. Many readers will probably be surprised that one of my favorite artists takes heavy inspiration from girl pop music, but what makes Grimes so great is she takes the format of pop music and injects it with creativity and independence. Boucher has described her music as “post-internet”, meaning that it is shaped by the fact that she’s grown up in a world where access to all of the world’s diverse music is just a mouse-click away. She has listed Christina Aguilera, Nine Inch Nails, Bjork, and Aphex Twin as equal influences. By combining elements of sugary pop with dark industrial and electronic music, the final product ends up being very unique.

She also happens to have one of the most beautiful singing voices that I’ve ever heard. Boucher is a DIY producer who, unbelievably, puts her albums together by herself on GarageBand. She is known for layering up to 50 different vocal tracks in the same song, making it sound like a large choir is singing when it’s really just her. The sound of her multitude of voices spilling into each other never fails to bring chills to my spine.

In addition to producing her own tracks, Boucher also hand-draws all of the eye-popping artwork for her albums, showcasing a highly detailed and psychedelic style. The music of Grimes conveys a feeling of unreturned affection, loneliness, and longing. Lyrics are mostly vague in her music and difficult to understand. It’s not important what she’s singing, but how she sings it. If you just listen to the sound of her voice (or voices), you should have no trouble feeling the emotional impact of the song.

Boucher is only 26 years old but already has 3 albums and an EP under her belt. Her debut, Geidi Primes, is a short record with minimalist production compared to her later work. It’s an album that seems underwhelming on first listen, but grows on you with each ensuing listen until you realize how brilliant it really is.

She followed Geidi Primes in 2010 with Halfaxa. This is my favorite Grimes record because I think it strikes the perfect balance between melodic songwriting and sonic experimentation. Consistently gorgeous and haunting throughout, Halfaxa is undoubtedly one of my favorite albums of the decade so far. She followed it with the excellent Darkbloom EP, which featured a similar sound. Grimes found breakthrough success in 2012 with her third album, Visions. Featuring a slightly more accessible sound with more discernible hooks, Visions received widespread acclaim from music publications and even landed the artist some much-deserved play on mainstream radio stations. While I prefer the more ghostly sound of Halfaxa, I don’t think Visions is “too pop” or a “sell-out” in any way. In fact, I think it’s almost as good as Halfaxa. While the album is more tied to popular song structure than her previous works, it still features all the trademark ingredients of Grimes’ sound that I love.

After the overwhelming success of Visions, she is understandably taking her time crafting the follow-up. With expectations sky-high and a fan-base that seems to be growing exponentially, it’s hard to imagine how she can top herself. However, I have total confidence in Boucher and know with certainty that whenever the next Grimes record arrives, it will be a new evolution in her sound and well worth the wait.