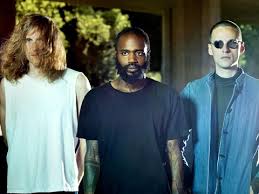 For decades, each generation has come up with new forms of rebellious music to terrify their parents. First there was rock and roll. This led to even more angry and intense sub genres like punk and metal. In the 1990s, hip hop emerged as the new face of angry youth with artists like Public Enemy whipping crowds into a frenzy. But all of this music has only paved the way for the ultimate sound of aggression: the experimental hip-hop trio Death Grips.

The three members of Death Grips each make invaluable and distinct contributions to the group; MC Ride (real name Stefan Burnett) provides vocals and lyrics, Zach Hill brings perfect percussion (in both live and electronic forms) to every song, and Flatlander (real name Andy Morin) handles the production. Their sound is an unprecedented mix of rap, rock, and electronic influences rolled into the most abrasively loud package imaginable. Their 2011 mixtape, Exmilitary, is one of the most attention-grabbing debut albums in music history. Love it or hate it (and most people will undoubtedly hate it), you cannot deny that this album attacks your ear canals unlike anything you’ve heard before. Showcasing MC Ride’s unique rapper-meets-punk singer vocal delivery and the group’s knack for creative sampling, Exmilitary received a surprisingly positive critical response for such a challenging listen.

They followed this success with a pair of albums in 2012, The Money Store and No Love Deep Web. Both were very well-received by fans and critics, but this was also the year that Death Grips became known for their rude and often immature antics. After canceling a string of tour dates to complete No Love Deep Web, the group released the album digitally for free without their record label’s permission and ended up being released from their record contract (likely exactly what they wanted). Death Grips have gained a reputation for canceling tour dates at the last minute or even just not showing up without notice. They also like to toy with their fans, often withholding information from them to stir up anticipation and drive them into a frenzy. As frustrating as their behavior often is, it’s all part of the Death Grips attitude and they wouldn’t be Death Grips if they didn’t act the way they do. Their relationship with their fans is love/hate to the extreme.

As hard as it is to catch the group live, those who have say it’s quite an experience. The thunderous rage that MC Ride brings to his stage presence is awe-inspiring, as is the manic energy of Zach Hill’s drumming. They have yet to play any of their post-2012 material live, but that will change soon as they are about to tour for the first time in 2 years (assuming they don’t cancel it again, a possibility that you can never rule out with Death Grips).

After self-releasing the short and glitchy Government Plates in 2013 as a free download, showcasing a more psychedelic sound from the group, they signed a deal with Harvest records and set to work on their magnum opus, The Powers That B. A double album running 80 minutes in length and featuring the culmination of every sound the trio had been working toward, this was the album that every Death Grips fan couldn’t wait for. After  the first half dropped online in June 2014, the full album was promised to be released by the end of the year. Then fans had to suffer through a seemingly endless period of no news and no explanation why the album didn’t come out as promised. The complete double album was finally released two weeks ago, nearly a year after the first half came out. Thankfully, the album truly is their ultimate work as promised and finds them evolving their sound in new directions. There’s more live drumming on the album than ever before and even some distorted guitars, making the album sound more like really tripped out punk music than hip-hop at times. However, it really doesn’t sound like anything other than Death Grips. No one else could’ve made it, and it’s hard to imagine anyone will ever make something like it again.

So the next time you’ve got a lot of energy and you’re in the mood for something really out there, give Death Grips a try. Their music definitely only appeals to a limited number of people, but for those who feel what it’s going for, it’s truly an incomparable experience. Beyond perfectly capturing the feelings of darkness and aggression that plague us all at times, the music of Death Grips feels empowering. The small kid who everyone picks on suddenly feels like he can leap over buildings and knock out his opponents in a single swoop when listening to one of their albums. If you can get past MC Ride’s unorthodox vocal style and all of the group’s shady behavior, you’ll find that there’s much more artistic value to Death Grips than just starting mosh pits and scaring parents.