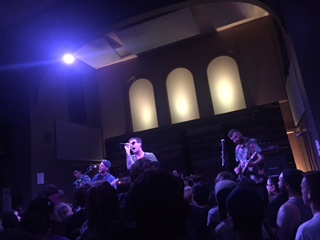 If you’ve been to a pop punk show, you know it’s an experience. On Monday, Oct. 2 the pop punk scene came to The Irenic. Four Year Strong’s 10 year anniversary tour brought the bands Life Lessons, Grayscale, Like Pacific and Seaway along for a night of great music.

Going into the night, I had seen Like Pacific and Seaway during previous stops in San Diego. I wasn’t sure what the other bands had planned, but I knew I was in for an intense night.

The concert started a little earlier than most, at 6 p.m. A small crowd arrived just in time for Life Lessons and Grayscale.

Life Lessons may be just a small band beginning to rise in the world of pop punk music, but the small crowd didn’t stop the band from having a great time. They jumped around the stage and got the audience prepped for the rest of the fantastic lineup. They promoted their latest music release and encouraged fans to pick it up at their merch table throughout the night.

Grayscale is another smaller band within the pop punk scene, but they know how to get a crowd going. They immediately brought the crowd closer to the stage and got them jumping around. It was by far one of the most enjoyable openers I have experienced.

Like Pacific brought a greater intensity and got the crowd riled up. The lead singer commented on California being his favorite state. It was their last night in California and they definitely went out with a bang. Fans were screaming along to their favorite songs throughout Lake Pacific’s set.

As the night went on and it drew closer to Four Year Strong’s set, the crowd was quickly growing.

Seaway was up next, and the crowd was ready. Seaway’s songs are easy to catch on to and sing along with. While the band had a different, more chill vibe than the others, this did not stop small mosh pits from forming and crowd surfing to take place throughout the set. They played a handful of songs from their latest album, “Vacation,” such as “Lula on the Beach” and “Apartment.” Of course, Seaway couldn’t forget about fan-favorites from their past album, so they closed out their set with “Airhead.”

Four Year Strong brings undeniable passion to the stage. The fans were ready to go from the second the band walked on. Mosh pits and crowd surfing commenced as the first chord rang out through the venue. The band commented on coming to San Diego many times before, saying that they expected nothing less from the audience. Nearly the whole crowd could be seen moshing, except around the perimeter of the small venue.

After their sets, the bands could be found hanging around their merch tables throughout the concert. This is always my favorite part of pop punk concerts – to see that interaction between the bands and their fans. It brings a whole new understanding to the music when you’re able to meet the people behind it all.