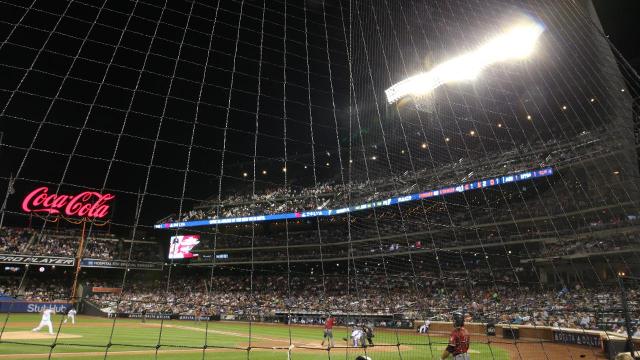 One of the biggest topics of discussion over the past couple of years in Major League Baseball has been ballpark netting.

We have seen people get hit by foul balls and players have called to extend the netting. However, players still want to have the connection with fans, whether it is through fans receiving autographs, a ball, a bat, batting gloves, or even just a high five or a fist bump. This issue arises the question: What is more important, fan safety or fan interaction?

This began in 2017 when then-New York Yankees third baseman Todd Frazier hit a foul ball and struck a young girl in the stands at a game in Yankee Stadium. Luckily, the girl survived, but it brought this issue to the limelight. Following the incident, MLB prompted all 30 stadiums to extend the netting at least to the end of the dugouts before the start of the 2018 season.

Some stadiums has found a balance between the fan safety and fan interaction.

Many places, like Petco Park, have a gap in between the dugout and the batter’s eye where it is impossible for players to hit a foul ball into the stands.

Others have gaps underneath the netting so players can interact with fans just a few feet away. In addition, some stadiums have installed netting where it can be clipped to the dugout to still have the fan-player relationship.

Then there are some places that have extended the netting past the bases in foul territory. Just this past week, the Chicago White Sox extended their netting all the way down to the foul poles.

Only a few days ago, Cleveland Indians shortstop Francisco Lindor hit a foul ball into the stands and hit a three-year-old boy. This event has prompted him to speak out about the issue:

“I encourage every MLB team to put the nets all the way down (to the foul pole). I know it’s all about the fans’ experience to interact with the players. I completely get that. You want to have that interaction with the players, getting autographs and stuff. But at the end of the day, we want to make sure everybody comes out of the game healthy. We’ve got to do something about it. ”

I like the stadiums that have the clipped netting because it gives the players and coaches the opportunity to interact with fans in any way possible before and after games. During the game, the netting is clipped to the dugout to prevent injury from baseballs and bats leaving the field of play.

Overall, I am not a fan of the netting. Even though I understand fan safety, players want to have the interaction with the players. Whether it getting a Mike Trout or Bryce Harper autograph, the chances of getting one (especially on a baseball) is very limited with the netting. When I was 11-, 12-years-old, I would be able to get autographs next to the dugout and talk to players like Mat Latos and Heath Bell just a couple inches away.

I think that if people do sit close to the field, they better be ready to get out of way or catch the ball to protect and prevent others from getting hit. The ballpark ushers, ticket personnel and public address announcer can only do so much, but it is the fans that have to pay attention and if they feel that may get hit, then they should sit in a seat where it is more unlikely for a batted ball or bat to hit them.