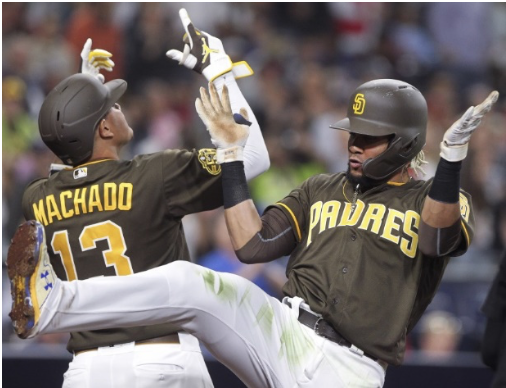 The 2019 MLB All-Star starters and reserves were announced this past week for the annual Midsummer Classic. Every year, there are those that do not get in, but deserved to. They are called snubs.

Typically, there are a few snubs, but this year, there was an unprecedented amount. And they affected more than just the San Diego Padres. The Padres’ closer Kirby Yates, who has an MLB-leading 27 saves (entering July 1), was the only one who made the team. This means no Fernando Tatis Jr., no Manny Machado, no Eric Hosmer and no Hunter Renfroe.

Even if Fernando Tatis Jr. missed a month due to injury, he changes the hometown team from good to great. He does it all. Speed. Strength. Power. Awareness. Energy. The energy that he brings to his teammates, his coaches, the fans and to this organization is electrifying and attracts people to watching him and this team play. Even MLB Network Insider Ken Rosenthal said Tatis Jr. is an All Star, while CBS Sports has called him “special.”

In his first year, Tatis already has a 3.0 Wins Above Replacement (WAR), has scored from third base on a fly ball to the second baseman and scored from first on a single to right, and he became the first rookie shortstop since Nomar Garciaparra to record ten home runs and ten stolen bases before the All-Star Break. These are remarkable achievements in baseball, and it is unfortunate that his talent (including the other Padres that did not return) cannot be seen to the rest of the sport.

Throughout MLB, there were snubs all across the league.

In the National League, one of the biggest names besides Machado to not make the team is Philadelphia Phillies outfielder Bryce Harper, who signed a 330 million dollar contract this past winter.

There is also Los Angeles Dodgers’ infielder Max Muncy, who hit a walk-off homerun in Game 3 of last year’s World Series. Muncy is tied sixth in the NL in WAR and 18 of the top 21 position players made the roster.

Furthermore, Milwaukee Brewers’ starting pitcher Brandon Woodruff did not make the team and his numbers are one of the best so far in 2019. Woodruff leads the National League in wins with ten and is also in the top spot in WHIP (Walks plus hits divided by innings pitched) with a whopping 1.14.

The American League is much of the same, whether a team is in a big-market city or not.

That includes the New York Yankees. First Baseman Luke Voit, who suffered an abdominal injury last weekend during the London Series, was one of the biggest snubs on the American League side. Voit was outlasted by Chicago White Sox’s Jose Abreu and Seattle Mariners’ Dan Vogelbach. What makes this surprising from this is that Abreu is one of three White Sox (pitcher Lucas Giolito and catcher James McCann) to make the team, despite only having a 39-42 record.

A couple other snubs comes at the shortstop position with Boston Red Sox’s Xander Bogaerts and Yankees’ Gleyber Torres. Both players are hitting over .290, getting on base more than 36% of the time and slugging at least 54%. Torres, along with Voit, were playing and not one to get hurt, like most of their teammates.

The Minnesota Twins, one of baseball’s surprises in 2019 with a 53-30 record have two All-Stars.

That was starting pitcher Jake Odorizzi and shortstop Jorge Polanco. However, a couple others from the team had the potential to also be on the team. One of those is outfielder Max Kepler. He already has a career-high 21 home runs.

It is surprising that the Twins, who are in first place of the AL Central by eight games to the Cleveland Indians, the host team, and 13 games to the Chicago White Sox, only have two players going, but the Indians and White Sox each have three members.

Even though the reserves were announced this past Sunday, players that had already received the invitation, have the option to decline and not participate in the game for any reason (injury, personal, etc.). Most likely, a couple of players from each side will back out opening it up for some of these players to make a dream turn to reality and be a part of a showcase with the game’s best players.