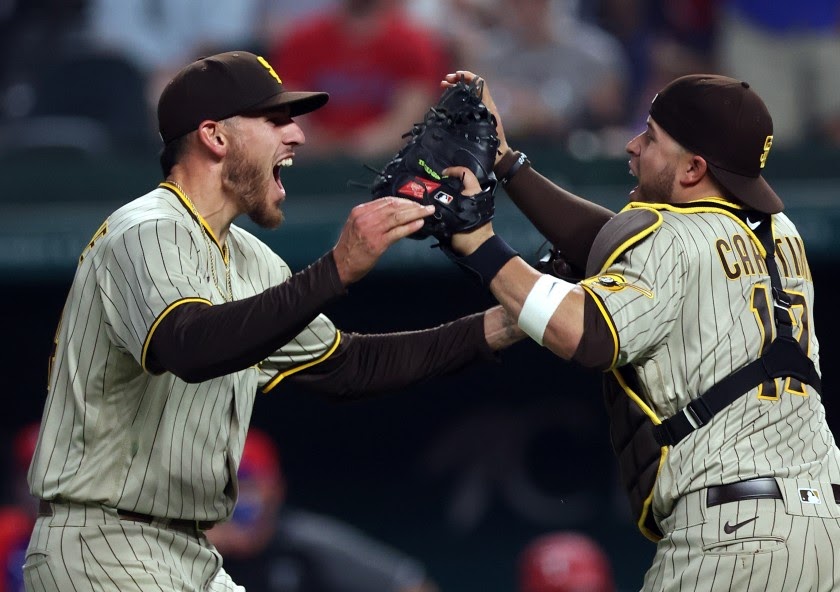 Behind the Seams with Blake: Padres Season Takeaways So Far.

Hello readers! I’m back with another post about the 2021 MLB season. For this edition of Behind the Seams, I will be recapping the biggest takeaways from the first 21 games played by my hometown team, the San Diego Padres. As of this writing they have a record of 11-10, placing them 3rd in the NL West standings. They sit behind the Dodgers and the 12-7 Giants, who have benefited from the Houdini magic of backup catcher Curt Casali, who amazingly has caught 5 consecutive shutouts in games he has started behind the plate. I have watched every Padres game this season, and there have been some really awesome moments, but also I’ve unfortunately gotten used to watching them miss out on some really big run scoring opportunities. Add in a few injuries to big stars, and that’s where the Pads find themselves at the moment. They began their second series against the division-rival Dodgers on Thursday, and the 4 game series will be going on all weekend long.

The first topic I will discuss is the various injuries the Padres have been hit with just a few weeks into the season. Every Padres fan held their breath when 22 year old face of the franchise Fernando Tatis Jr. fell to the ground in pain after a swing 2 weeks ago. It turned out to be a shoulder injury, and the idea of him having to undergo surgery and miss the season was being floated by media outlets. Thankfully, he only ended up missing about 10 days, and while he has struggled to start the season, I know Fernando is bound to get red-hot offensively any moment now.

Another promising Padre who has been bitten by the injury bug this season is left handed starter Adrian Morejon, but unfortunately for him, he will miss much more than 10 days. He left his last start with a forearm injury, and he has undergone the infamous Tommy John Surgery, which has come to mean that he will miss about a year and a half rehabbing. It’s a shame to see a talented young pitcher like Morejon miss an extended period of time with injuries, as he was going to have a really good chance to make a name for himself on this 2021 Padres squad. Now, we’ll have to wait until either late in the 2022 season or 2023 to see what Morejon can become for the team.

One of the top starting pitchers in the MLB in the 60 game 2020 season, Dinelson Lamet has also struggled with injuries to start this season. He went down with arm troubles late in 2020, and the Padres have been extremely cautious with him since in hopes of him not requiring surgery. As of right now, their strategy isn’t paying off… Lamet made his season debut a few days ago on April 21st but had to leave after just 2 innings due to forearm soreness. He is now back on the injured list, but the team believes he will be back on the active roster shortly.

The Padres have also started the season quite badly when hitting with runners in scoring position. (Don’t worry, I’m saving the good story for last) In terms of runners left in scoring position per game, the Padres have the 3rd worst mark this season, leaving an average of 4 ducks on the pond per game. What’s most frustrating for me to watch is that the team seems to have a habit of taking fastballs down the middle for strike 3 in big moments with runners on base. I don’t have a grand scheme for how they could turn this habit around, but I’d at least like to see them swing at the pitches instead of giving up as soon as they don’t get the pitch they’re looking for. Yes, I know it’s easy for me to say because I’m not the one who has to try to hit 95+ mph pitches on a daily basis, but it’s food for thought. Perhaps the team just needs a slight altering of their approach at the plate and then their struggles with runners in scoring position can become less of a glaring issue.

As promised, I’m going to end on a high note. In just his 2nd start of the season and as a Padre, Joe Musgrove threw the FIRST NO HITTER OF FRANCHISE HISTORY! This game was truly awesome to watch. Musgrove was in total control of the Rangers, as the only hard hit balls of the game were liners to Wil Myers in right to close out the 8th inning and to 2nd baseman Jake Cronenworth in the 9th. I was so glad that manager Jayce Tingler left Joe in the game to complete the career night, as it’s become common for pitchers to be removed in the 6th or 7th inning with no hitters intact because their pitch counts are already at or approaching 100. I will say this until the end of time; a combined no hitter is nothing compared to an individual no hitter. Every franchise in the MLB now has at least one no hitter in their history, but none of them took as long to get one as the Padres did, waiting 8,205 games until finally getting that first no hit performance from Musgrove. It is such a great story that Musgrove ended up being the first to do it as a Padre, as he is from the San Diego area, and even got a Padres tattoo on his arm when he was 18. The Padres acquired “Java Joe” from the Pirates over the offseason, and I hope that this is only the beginning of the great pitching performances that we will see from him in a Padres uniform.

P.S. In my prior blog post, I wrote about how the As got off to such a horrible start this season, and I must point out that they have completely turned around their season since. They have won an astounding 11 games in a row, and now look like the contending team they’ve been the past few years. Maybe reading my Behind the Seams post about their struggles gave them motivation to prove me wrong and reach their potential. The baseball season is full of surprises, and that’s one of the many reasons I can never get enough of it.