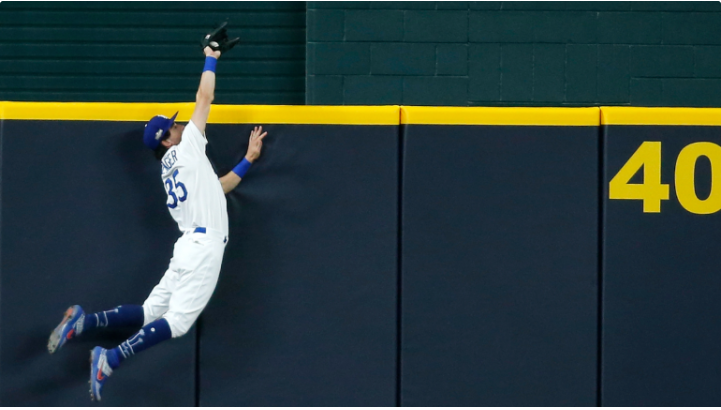 Lightning-fast postseason rolls on as three of four LCS slots are clinched Thursday.

The Division Series round of the playoffs have lived up to our expectations, as there have been many fantastic games and hard-fought battles even through just the 2nd round of the postseason. As promised, the rounds are happening very quickly, due to the much more compacted schedule of the 2020 postseason compared to years past. Three of the four spots for the Championship Series round have already been filled, with the Dodgers, Braves and Astros all securing spots on Thursday. This leaves us with one spot left to be filled, which will go to either the Yankees or the Rays. Next, I will be breaking down each of these remaining playoff teams, along with which players to look out for when watching each game.

Firstly, the Los Angeles Dodgers. I’m gonna go out on a limb and say that it would be an outrage if this team did not make the postseason, as they are absolutely stacked top to bottom. The Dodgers ended up leading the MLB with 43 wins during the regular season, to go along with just 17 losses. Their big splash trade for OF Mookie Betts this offseason certainly paid off, as he is in the National League MVP discussion after posting 16 home runs and 10 stolen bases to go along with a .292 batting average in 55 games during the regular season. Betts and Co. have been hot out of the gates in the postseason, sweeping the Milwaukee Brewers in the best of 3 Wildcard Series, and then sweeping the San Diego Padres in a best of 5 Division Series. (Sheds tear) Like I was saying, they will look to keep the good times rolling in the NLCS against the next team I will be discussing; the Atlanta Braves.

The Atlanta Braves ended the regular season with the 3rd best record in the National League, going 35-25. They have gotten fabulous offensive performances from numerous players this season, such as OF/DH Marcell Ozuna, who led the NL with 18 home runs, 56 RBIs, .338 AVG, and a .636 SLG% in 60 games, and NL MVP candidate 1B Freddie Freeman, who hit 13 home runs, 53 RBIs, .341 AVG, and a .640 SLG% in 60 games. They have also gotten steady contributions from young OF Ronald Acuna and SS Swansby Danson (ahem, Dansby Swanson). They have also received some great pitching from Starting Pitchers Max Fried and Ian Anderson, as well as a rock-solid bullpen. The Braves have begun their postseason very much as strong as the Dodgers have, as they swept the Cincinnati Reds in the Wildcard round, and then in the Division round, they swept the Marlins, who were previously undefeated in a postseason series since the Marlins franchise began in 1993. The NLCS will surely be a great matchup, as both teams are yet to lose a game coming into the series.

The third team that clinched a Championship Series spot on Thursday was the Houston Astros. This has been a very interesting year for the Astros, as their offseason was spent being the disgrace of MLB, after it was found that they cheated in various ways on the journey to their 2017 World Series victory over the Dodgers. They ended up with substantial fines and draft pick forfeitures and firing many coaches and front office workers as a result of the scandal. They decided to hire respected manager Dusty Baker in order to restore some order to their team. Though many of their superstars of prior years had worse than usual regular season performances, and ace pitcher Justin Verlander missed the rest of the season after just 1 start, they still were able to sneak into a playoff spot. The Astros have had a good postseason so far, with superstars SS Carlos Correa and OF George Springer coming alive on offense for the first 2 rounds, helping them to sweep the Minnesota Twins in the Wildcard Series and beat the division-rival Oakland Athletics 3 games to 1 in the Division Series. In the ALCS, they will take on the winner of the Yankees vs Rays, both of which I will discuss next.

The New York Yankees started the 60 game season rather sluggish, as they were missing OF Giancarlo Stanton and/or OF Aaron Judge for the majority of the season. Things changed for the better for the Bronx Bombers in the final month of the season, however, as they finally started living up to their nickname, while getting outstanding hitting performances from 1B Luke Voit, who led the MLB with 22 home runs, and 2B DJ Lemahieu, who also led the MLB with a .364 average. The Yankees swept the Cleveland Indians in the Wildcard round, and have been led by OF Giancarlo Stanton thus far, as he has hit 6 home runs through 6 games. They will hope for more power out of his bat in game 5 of the ALDS against the Rays.

The Tampa Bay Rays are the final team I will be discussing, and they finished the 2020 regular season with the 2nd best record in the MLB, at 40-20. They employed their usual relatively low budget team with surprisingly great performances from players 95% of baseball fans have never heard of. The story of their postseason has been OF Randy Arozarena, who has 12 hits and 3 home runs through 6 games in the playoffs as of Thursday night. Arozarena’s magic bat has helped the Rays sweep the Toronto Blue Jays in the Wildcard round, and they will look to get a huge game out of him in the fifth and final game of the ALDS against the Yankees on Friday.

Personally, I’d like to see a 2020 World Series Matchup of the Tampa Bay Rays against the Atlanta Braves.