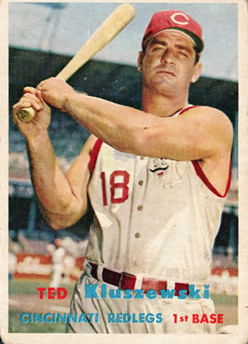 Hello readers! I am back once again for another semester of sports blog posts. Since there aren’t a great amount of things happening in the MLB or NFL worlds at the moment, I am excited to bring you the first installment of Baseball Players You’ve Never Heard of. In these posts, I will write about fantastic sluggers from the mid 1900s who would likely only be recognized and known by about 1% of casual baseball fans.

Ted Kluszewski, nicknamed Big Klu, has got to be one of the most interesting players of Cincinnati Reds/Redlegs history, combining power with a great eye at the plate to become one of the most feared hitters of the early to mid-1950s. The left-handed first baseman had a .298 batting average in his career and hit .300 or better in 7 seasons. From 1953-55, he hit at least 40 homers each year, with 1954 in particular being his most impressive. That season, he led the National League with 49 home runs, 141 runs batted in, and a .326 batting average, en route to finishing 2nd in MVP voting behind the Say Hey Kid, Willie Mays.

Perhaps the most intriguing stat Big Klu compiled over his career was the fact that he walked (492) more times than he struck out (365). In his aforementioned 1954 season, he hit 49 home runs, while striking out just 35 times and drawing 78 free passes. That’s leading the league in homers while walking more than twice as many times as he struck out. Insane. With the exorbitant levels that modern day hitters are striking out, it would be something of a miracle to see a player put up a walk to strikeout ratio as Kluszewski did. Nowadays, players are seen as statistical outliers if they end up having more walks than strikeouts, but those totals usually differ only by very small amounts. (Barry Bonds had several outrageous walk to strikeout ratio seasons, but he was literally on a different physical level than most players, so I exclude him from this argument). Yes, I know that Kluszewski likely wasn’t facing 100mph gas every day like modern day players do, but I must give credit where it’s due, and Big Klu had an excellent eye at the plate. In fact, according to Baseball Reference, Kluszewski is the only player in MLB history to hit 35 or more home runs in four seasons while having fewer strikeouts than homers.

While Kluszewski put up some awesome numbers over the course of his career, merely looking at the statistics does not do him justice. Big Klu was feared by opponents because of his massive arms, and he actually managed to upset Reds front office personnel when he cut off the sleeves of his uniform upon arriving to the Reds in 1947. In an article for The Cincinnati Enquirer, Big Klu said he needed to cut them off because they were too tight and constricted his biceps and shoulders, interfering with his swing. Kluszewski was also a big-time tight end in college football at the time he signed with the Reds, so one could say that he wanted to keep the intimidation factor in play even though he was no longer on the gridiron.

Keeping with the humorous tone, according to a Sports Illustrated article, Kluszewski in 1959 became the first player to appear in a game with the name on the back of his jersey misspelled, with the z printed backwards, and an x instead of the second k. As a fellow Polish person with a very Polish last name that is often mispronounced/misspelled, I can empathize with the awkward feeling that comes with that type of situation.

Big Klu was inducted into the Cincinnati Reds Hall of Fame in 1962, but I can’t help but wonder why he didn’t get more consideration for enshrinement in the larger-scale MLB Hall of Fame in Cooperstown, New York. His peak years from 1953-56 were about as good as it gets, as he hit over .300 with 35+ homers and 100+ RBIs in each season. Along with his offensive production, it should be pointed out that he was a standout performer defensively at first base as well, leading NL first basemen in fielding percentage for 5 straight seasons in 1951-1955. Despite these accomplishments, he failed to gain enough traction to reach the 75% induction threshold, as 14.5% was the highest percentage of votes he received in any of his 15 years on the voting ballot.

While most people would be quick to say current Red Joey Votto is the best first baseman of Reds history, I believe Ted Kluszewski still warrants consideration to be in that discussion.