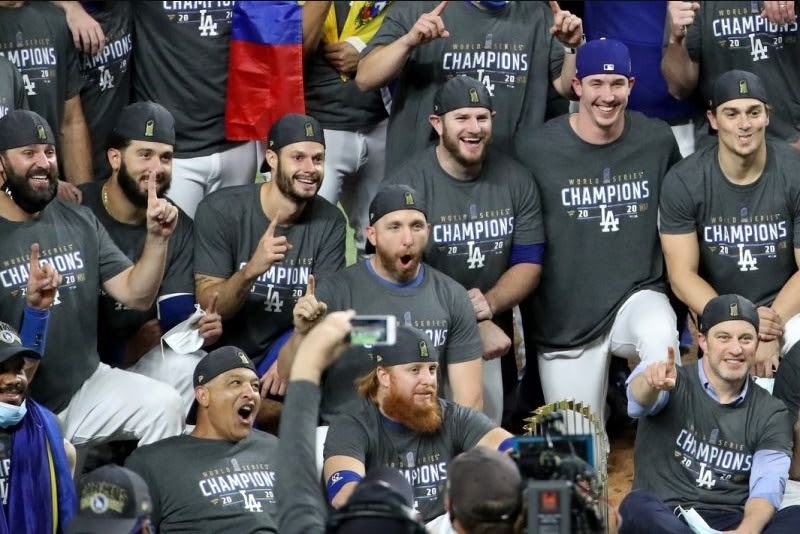 Greetings readers, it truly is a crazy time right now politically, but you can count (pun intended) on me to bring you some insight about the latest baseball news. First and foremost, congratulations to the Los Angeles Dodgers for securing their first title in over 30 years. Teammates are happy for Kerton Clayshaw (Clayton Kershaw, but an MLB analyst called him that instead by mistake prior to a game in a recent postseason, and no one noticed) who finally got his first World Series win in his magnificent career. Dodgers fans haven’t felt this great since a hobbled Kirk Gibson did the impossible and hit a walk off homer off of Oakland A’s dominant closer Dennis Eckersley in the 1988 World Series. Unlike Gibson’s famous fist-pumping celebration, this season’s world series champions likely won’t be remembered for plays they made during the game, but events that occurred after the conclusion of the game.

Unfortunately, this long-awaited win comes with an extra side of controversy. Dodgers 3B Justin Turner left Game 6 due to a positive test for COVID-19, only to come mask-less onto the field and celebrate the win with his teammates after the game. Lucky for Turner, the league announced Friday that he will not face any discipline for his unsafe actions. Nothing like this has happened in recent memory, where something unrelated to the game itself was the biggest topic of discussion in the days following a World Series win. It was only fitting that in a season where it was such an added struggle to keep players healthy, that something would happen in the biggest game of the season and the virus would steal the show instead of the actual plays on the field.

Looking back on the season, some will say that it was less than stellar, but all things considered, we as fans are pretty lucky that we still got to watch a MLB season happen, even if it was just 60 games. We knew we wouldn’t see Aaron Judge and Giancarlo Stanton race for 70 homers, but we still did get to see some great stat lines put up. We learned that it’s possible for players to experience breakout seasons even in less than half the length of a regular baseball season. I will now discuss some of the players who I believe fit into this category.

Cleveland Indians RHP Shane Bieber – Bieber was largely considered the top starting pitcher in all of baseball in 2020, as he dominated batters from day 1 of the season. Bieber had the gaudy strikeout numbers in 2019, but 2020 was when he really stepped into the spotlight and solidified his case as a consensus top 3 pitcher. He was still quite unknown by most baseball fans at the start of 2020, as he was buried behind Corey Kluber in Cleveland’s starting rotation for his first few years in the major leagues, but now it’s safe to say the MLB and fans are aware of his presence at the top of the Indian’s rotation, where he will hope to remain their ace for years to come.

San Diego Padres SS Fernando Tatis Jr. – Tatis started his rookie season in 2019 with a bang, as his gifted physical tools were on full display for the Padres for the first half of the season. Unfortunately for the team and himself, he was injured on an awkward over-extension covering 2nd base, and he missed the remainder of the season as the Padres dropped out of contention. This year was a different story, as he lit up the league and led in most offensive categories through the first months of the season and looked like the obvious MVP of the National League. The final month of the regular season wasn’t the same though, as Tatis endured a lengthy slump, and it ended up allowing other top NL players like Mookie Betts, Freddie Freeman, and even his infield buddy Manny Machado to match his level of offensive performance, and those three ultimately pushed Tatis out of the MVP running. Tatis and Padre Faithful will hope that he can carry his fantastic production through the entire season in 2021.

New York Yankees 1B Luke Voit – Voit came to the Yankees in a 2018 trade with the Cardinals in exchange for Relief Pitcher Giovanny Gallegos, a rare example of a trade that has worked out for both teams. Voit had shown his great raw power in prior seasons with the Yankees, but 2020 was a step above his previous production. He led the league with 22 home runs in just 56 games, which is equivalent to around 60 home runs in a full 162 game season. The fact he plays for the Yankees makes the thought of him continuing to produce at that rate in 2021 simply incredible. The Bronx Bombers already have 2 players (Judge and Stanton) capable of hitting 50+ home runs in any full season, so the addition of Voit to the annual 50+ homer threat list makes the Yankees even more of a horrifying offense to face, and should further prove that their 2021 offense will be a must-watch for all home run loving fans in the MLB.