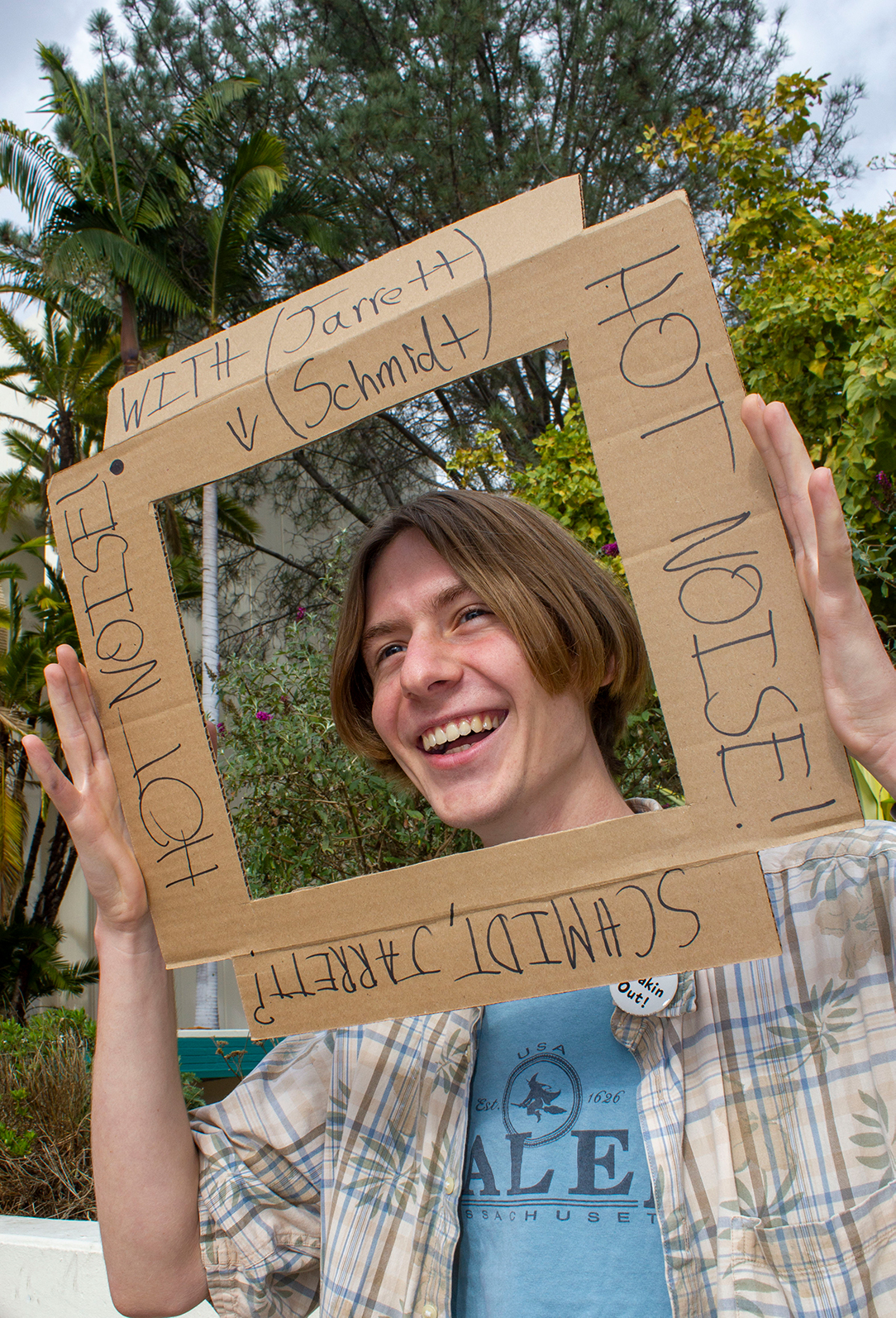 If you’re an early bird looking for that extra pump of energy that 7 espresso shots just can’t fulfill, I have the perfect remedy for you. I recommend one heaping serving of “Hot Noise! With Jarrett Schmidt.”

Jarrett Schmidt’s solo radio show features him and special guests creating and deconstructing sounds some of us have yet to ever hear. Airing live on KCR College Radio Saturdays from 5 to 6 AM, “Hot Noise! With Jarrett Schmidt” is the most energetic and electrifying morning radio show you have never heard.

The enigmatic host of this program is none other than the early-bird Jarrett Schmidt. The third-year Economics major transferred to SDSU from Southwestern College over the summer to start his fall of 2019 as an Aztec. Looking to exercise his creativity and give the world some piping hot noise, he joined KCR.

Most of the time new members are required to have their first semester of shows with a partner, so as to make the transition easy for those who lack experience. Schmidt figured he would be better off doing something on his own accord.

With early morning time slots generally wide open, Schmidt managed to work his magic and get his own radio show at the peak of dawn. A radio show at 5 in the morning is perfect for Schmidt; he says he’s up before 5 almost every day and wakes up with no alarm,

What exactly is hot noise? It’s anything that he wants it to be. Having played trombone since middle school, Schmidt is obsessed with creating new sounds using household items, contact mics, and even pumpkins. If it can make an interesting sound, there’s a chance Schmidt has already toyed with it.

“Hot Noise! With Jarrett Schmidt” is only one of a few creative outlets for the noise machine.

His Bandcamp account features over twenty albums created by Schmidt in the last 2+ years. Within this plethora of music is a surplus of experimentation. Schmidt has a concept album titled Collaborations With the Radio, where he created compositions in conjunction with AM radio shows that were live on air at the time of the recording. Check it out for yourself and see how it affects your position on climate change.

Being a musician of all sorts often means collaborations with others who can jam out with you. Schmidt is in a free jazz group named Ebaugh that will be performing at Upright Citizen in Chula Vista on December 14th. He has also played trombone with local band Blush on multiple occasions. Most notable though is his band Wholly Roullars, pronounced “Holy Rollers”, where they have yet to write down the name of the band using the same spelling. Every time you see their band name, it is spelled in a completely different way. This noise band features Schmidt and his friend Orion putting their all into their performances and sometimes even dressing up as the Joker to get the crowd to put a smiley face on.

It’s clear talking with Schmidt that he does all of this for the joy that it brings him at the end of the day. Whether it be putting out concept albums created in his bedroom at the wee hours of the night, or sketching landscapes in his sketchbook as he awaits his next class to begin, Schmidt is living his life to the fullest.

In a Latin Jazz band during his last semester at Southwestern, he exercised this same daringness during his solo parts where he intentionally played off-key in an effort to do something different. Though his professor wasn’t happy about it, he felt happy to let something out that was deep within him.

His eagerness to experiment and create is contagious and inspiring to anyone who struggles with doing the same. Schmidt carries around a daring fearlessness that makes anyone want to pick up some art supplies and just see what happens. For him, being carefree and doing things for your own personal sake makes life easy and enjoyable.

So, what is Success to Jarrett Wolfgang Schmidt?

“Just being able to pay my bills.”

He is not obsessed with stardom or becoming a millionaire; Schmidt wants to cover necessities and then from their exercise his creativity to keep that smile on his face.

His inspirations range from Frank Zappa and John Zorn to Gary Wilson and R. Stevie Moore

“They’re really just on another level with their instrumentation. They really understand music theory. I think it’s something to really strive for, but also I think it’s cool just doing stuff without knowing how to do it.”

R. Stevie Moore is notorious for having released approximately 400 albums in his life so far, Jarrett Schmidt is 23 albums in so far and he wants to someday get into the same numbers as  Moore.

“Hot Noise! With Jarrett Schmidt” is available on Apple Podcasts, Spotify, and Soundcloud right now. It is live every Saturday morning from 5 to 6 am. He has plenty of music live on his Bandcamp and you can see him performing at an open mic near you.

He would like to let the world know, “A lot of what I do and what I see in people is doing their own thing. It’s all about individualism.”

“I think it’s good for people to do what you want to do; do something that’s true to you.”