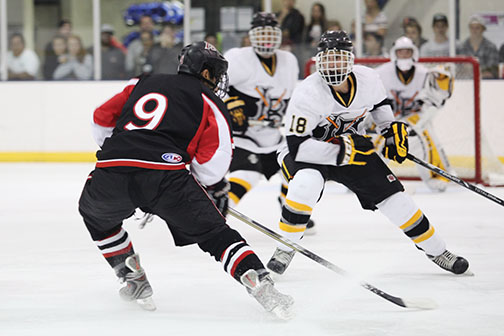 For the second game in a row, the Aztecs’ hockey team played host to the Arizona State Sundevils after coming off a big 6-5 win on Friday night.   Sadly, the Aztecs couldn’t carry that momentum into today’s game.  ASU was tired, this game being their third game in three days, but that didn’t show in today’s game.  In a game ridden by penalties for both teams from the start, Arizona State took a 1-0 lead midway through the first period.  ASU’s Jake Savona made it 2-0 with a nice snipe past netminder Connor O’Brien with just over 2 minutes left in the first.   Savona would strike again in the second period with the exact same shot, making it 3-0.  Just 24 seconds later, the score increased to 4-0.

In the 3rd period, ASU capitalized on a 5-on-3 power play and made the score 5-0.  They would go on to shut out the Aztecs.  Freshman goalie Matt Inglis got the shutout.