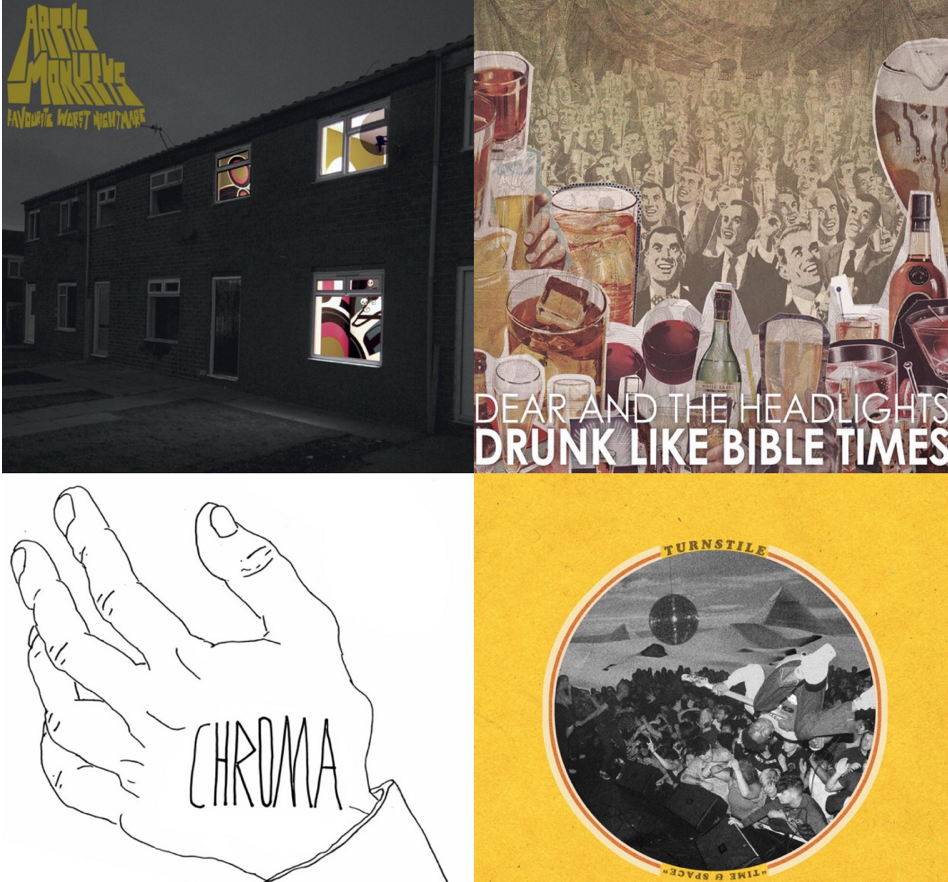 Through the hot San Diego fall, I’ve been searching for new music that fits my “fall mood.” This week, I’ve decided to do a collective of four albums that I’ve had on repeat during these autumn months.

Time and Space, released by Turnstile in 2018, is one of my favorite albums of all time. The transitions, powerful color, and aggressive liveliness of this record is something that brings me back for more every time I listen to it. I could best describe this album as Hardcore, but with a mix of garage, post-punk, and sometimes jazz. Brendan Yates has one of the most powerful voices, and this, combined with Turnstile’s catchy chants and riffs, is the powerhouse behind this band. Two of my favorites are “I Don’t Wanna Be Blind” and “Can’t Get Away.” The ballad-like singing in the background mixed together with the gritty, distorted guitar, and the screams of Yates make Turnstile one of the most energetic and bold bands I’ve listened to.

Drunk Like Bible Times is a new discovery to my music collection this fall but one that I haven’t been able to put down. Released in 2008, Deer and the Headlights have been around for quite some time and have established themselves since then greatly. The instrumentals on this record are refreshing and flow well with the vocal performance coming from the very talented, Ian Mertzger. This whole record is a beautifully emotional, pop-rock 12-song listening experience. “I’m Not Crying, You’re Not Crying, Are You?,” “Carl Solomon Blues,” and “Talk About” are three songs that especially stand out to me due to the blend of classic ballads and rock chords mixed with experimental hand claps, piano, and different time changes and tempos. Overall, I would recommend this album to anyone who loves a mix of alternative, rock, and pop.

The Arctic Monkeys are always a classic go-to for fall music. Favorite Worst Nightmare, released in 2007, is one of my personal favorite albums of theirs and has been for years. It’s a bit more gritty than some of their earlier releases but not as sharp or mood-elusive as the four albums after it. Songs such as “Old Yellow Bricks,” “Only Ones Who Know,” and “505” give the album different contrasts between more upbeat songs and melancholic slower grooves. The lyrics of the songs on this record are real and the catchy tunes keep you listening for more.

Chroma, released in 2017, is a ten-song record that is a mix between garage rock and alternative punk. Chroma has energetic guitar riffs and impressive, fast-paced drum beats and fills. The almost surfy-tone and pace of this album is a great indie rock record to listen to any time — whether you’re on the road, at a concert, or just need background music. Mt. Eddy, consisting of four members, including frontman Jakob Armstrong, is now a newly formed band called Ultra Q. They have just recently released an EP, “We’re Starting To Get Along.” A favorite off of Chroma would be “Working Title”

These 4 albums are going to keep me going through midterms and finals this fall semester. I highly recommend them to any experimental alternative rock lovers. Happy November!