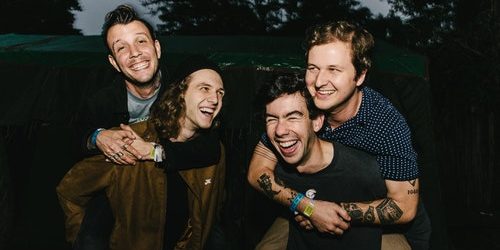 The Frights Sell Out The North Park Observatory to Sweaty Teens, Bringing True All Their Frightening Dreams.

San Diego’s own The Frights played a sold-out show at The Observatory North Park on August 24th, which served as the kickoff date for their fall tour featuring HUNNY and Hot Flash Heat Wave. This hometown show served as a record release party for The Frights’ third full-length album, Hypochondriac, and, unbeknownst to all, as a birthday party for lead vocalist Mikey Carnevale. And what a party it was.

Hypochondriac is The Frights’ first record released on Epitaph Records since signing with the established punk rock label earlier this year. For the most part, the tracks feel softer and more personal than those on The Frights (2013) or You Are Going To Hate This (2016). “Goodbyes” and “Alone” are acoustic and full of raw emotion. Conversely, “Crutch” stands out as pure pop-punk, even bordering on emo territory. Gone is the “dirty doo-wop” sound The Frights were first known for, now replaced with slower, sadder songs about heartbreak.

I started my evening at M-Theory Records for a surprise acoustic set prior to the Observatory show. The Frights played through a lot of their new songs from Hypochondriac (a sound well-suited for an acoustic record store show), as well as some older favorites, such as “Of Age” from You Are Going To Hate This. The show felt intimate and wholesome, standing in stark contrast to what I’d experience later on.

At 8:00 P.M., I embarked to the Observatory for the real show. Supporting The Frights were Orange County’s The Grinns and Los Angeles’s The Marias. Typically, opening bands play for an unenthusiastic or nonexistent audience. Thankfully, tonight was not one of those times.  Towards the end of The Marias’ set, the band announced that they’d never had crowd-surfers at one of their shows and invited us to change that. The crowd obliged, establishing the rowdy energy that would continue for the rest of the night.

Around 9:30 PM, The Frights took the stage. Numerous floor lamps and suitcases had been arranged between the instruments and equipment, creating a visual reminiscent of the album cover for Hypochondriac. The floor was tightly packed as the sold-out crowd moved in for the main attraction.

It had been a while since I’d been to a show like this – Southern California, all ages, that perfect blend of surf/garage/punk rock that you can’t help but move around to. In my usual concert-going locale (Vancouver, British Columbia, Canada, eh?), all-ages shows are rare. Furthermore, the stereotype of Canadian politeness usually extends to concert-going and mosh pit etiquette. “Excuse me, sorry, may I bump into you a bit here, bud?” “Sorry, of course, give’r.” Perhaps that’s a slight exaggeration, but the crowds I’m typically in are either of the mid-twenties hipster or late-thirties dad-punk variety, and it’s never anything I can’t handle. Based on these experiences and the level of “punk” that I ascribe to The Frights (maybe a 4/10 – sorry, guys), I thought that at most I’d be doing some low-key jumping around and singing, with a mosh-pit or two thrown in for some of their faster songs.

I was immediately proven wrong, as three seconds into The Frights’ first song, “Kids” (from You Are Going To Hate This), and I was inadvertently screaming for the first time in years and grasping valiantly (and unsuccessfully) for whatever nearby seventeen year old’s limb I can find to avoid drowning. There was a fleeting moment where I felt myself being swallowed up by the crowd and I wondered “Is this it? Is this how it ends? Trampled to death by teenagers at the Observatory, a mere nine days after arriving in San Diego for my second study abroad semester?” A sense of calmness washed over me as I accepted my fate. Thankfully, I quickly remembered that I’m a grown adult as I found my footing, and forced myself to push around with the best of ’em.

For the rest of the night, the crowd didn’t relent in their rowdiness, which the band reciprocated by putting on a wild show. The setlist felt like an even distribution of songs from their discography, including older favorites like “Makeout Point” (from 2013’s Fur Sure EP) as well as the surf punk tunes from their self-titled debut record that The Frights are most known for. The songs just seemed to keep coming, extending the set for almost a full hour. By the end of the show, crowd and band had bonded in hoarse voices and sweat-soaked t-shirts.

After the requisite chanting of “one more song,” The Frights returned for their encore and played through the entirety of their debut EP, 2013’s Dead Beach. Additionally, two wacky waving inflatable arm flailing tubemen (staples at any Frights show) were revealed and erected, mirroring the crowd’s enthusiasm as the final crowd-surfers of the night sailed overhead. Sweaty and bruised, we all used the last of our energy for one last hurrah in the mosh pit. As the show ended, I had no other wish in the world than to do it all over again.