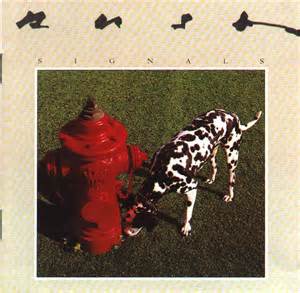 This week we are going to take a look back at Rush’s 1982 masterpiece Signals. The last of Rush’s trilogy of commercially successful albums that catapulted them into the international spotlight. The trio of albums mentioned are Permanent Waves, Moving Pictures, and Signals. They were removed from the band’s fantasy oriented, long and epic songs that dominated their early career. Rush was now a focused and well-oiled machine, releasing intellectually challenging but still commercially acceptable music. Signals was the beginning of the band’s extensive use of the synthesizer throughout the 80’s. The album is mostly thought of as a side note to the very popular Moving Pictures, which contained their celebrated track Tom Sawyer. The real strength behind the album is that it trades successful hit singles for a completely solid and energetic total album experience. Let’s take a listen. Side A The lead song on Signals also happened to be their biggest hit from the record, the radio-staple Subdivisions. This synth-driven mid-tempo rocker demonstrates the band’s full commitment to their switch over to the aurally striking synthesizer sound. Bassist and singer Geddy Lee is the man behind the keys on this record. He sings about the alienation that one receives in our fractured and unfriendly society. The subdivisions in question are the borders that people draw between themselves and others in an attempt to define themselves, this includes physical borders such as the subdivisions of a housing complex. Lee’s keyboard solos weave into the song between the verses and guitarist Alex Lifeson’s solo brings authentic life to this modern sounding aural barrage.

The second track is the upbeat hard rock song The Analog Kid. It is one of the songs that features Lifeson’s guitar more in the forefront of the album. One of the issues the band encountered as they adopted the synthesizer was how to balance it with Lifeson’s previously dominant guitar. For much of the decade it was relegated to a lower place in the mix, but on Analog Kid he is back in the spotlight and solos with impunity. Up next is Chemistry, which is the last song that Rush has released with lyrics credited to every band member. Rush’s songwriting dynamic is unusual in the chronicles of rock history, as drummer Neil Peart wrote the lyrics to nearly every song the band has released since he joined in 1974. Chemistry is a spacey experience that showcases a very balanced mix of bass, guitar, synthesizer and Peart’s always stellar drumming that pushes the song forward. The track is a good example of Signals’ exploration of the lyrical motif of communication, how it can separate or bring people together. The last track on the first side is Digital Man, which may or may not be related in title and theme to The Analog Kid (a fun little progression). Digital Man is a reggae influenced exploration of old and new that prominently features Geddy Lee’s steady bass play. There is an electronic freak out section that pulses through the song at the middle and the very end as the song fades out to close the first side. Side B Fading into the second side of the album is The Weapon. With a collage of electronic sounds, the song is part of the “Fear Series” of songs scattered throughout the Rush discography. The series itself is a collection of four songs dealing with different aspects of the emotion of fear. The Weapon is pretty self-explanatory when viewed in that light, it concerns weapons that humanity produces that inspire terror in the hearts of those it is aimed at. It can be inferred that the weapon is some sort of nuclear bomb, so powerful that its own creators were frightened of it. The tone of the song balances a space-age sense of innovation with an unsettling feeling of paranoia for what this technology could bring. New World Man is another technologically themed song. The ‘New World Man being described is a caricature of the people of the new world, being compared and contrasted to the ‘Old World Man’ and the ‘Third World Man.’ The song is melodic with a mid-tempo beat and promises both trials and triumphs for the New World as it tries to find its place among the old.

The third song on the second side is the melancholy piece Losing It. It features multi-instrumentalist Ben Mink playing electric violin. Think of U2’s Sunday Bloody Sunday but with a more immediate feel to it in line with the electro-synth feel of the album. Losing It is a powerfully emotional song, and the saddest track on an album frequently visits the negative aspects of human interaction. The final track on Signals is Countdown, which describes the launch of a space shuttle and incorporates dialog recordings from the Columbia shuttle throughout. The song is similar to The Weapon in its fear of humanity’s reliance on technology, but offers a more promising future for those who use technology to keep advancing forward. Ironically, the track was used as a wake up song for the ill-fated last flight of the Space Shuttle Columbia. Signals by Rush is a transitional album, but like many bands that transition period is often when they write their most impressive work. It’s a highly-polished and dense record that offers intellectually stimulating and musically challenging songs for any listener who feels up to exploring them. Incidentally, Rush is the first band profiled in this series that isn’t American or British, yay multinationalism!